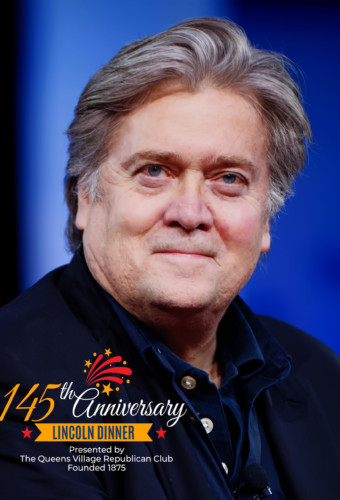 After months of hard work we were entering the final week before the day of our 145th Anniversary Lincoln Dinner, when we received the fateful call from Antuns, our dinner venue. The club’s dinner committee had been pouring their hearts and souls into producing the most patriotic and energizing celebration of our first Republican President, Abraham Lincoln, and galvanizing the troops to re-elect our extraordinary leader, President Trump, for four more years of American greatness!

It all started back in December when Joe Concannon and I went to a Manhattan screening of the new film about Communist China’s threat to the world, “Claws of the Red Dragon” and talk by Steve Bannon, former White House chief strategist. After the talk, I jumped at the opportunity to personally invite Bannon to be our keynote speaker at the Lincoln Dinner and handed him a letter of invitation. He said he’d be thrilled to do so for America’s oldest Republican Club, in the hometown of President Trump’s birthplace! 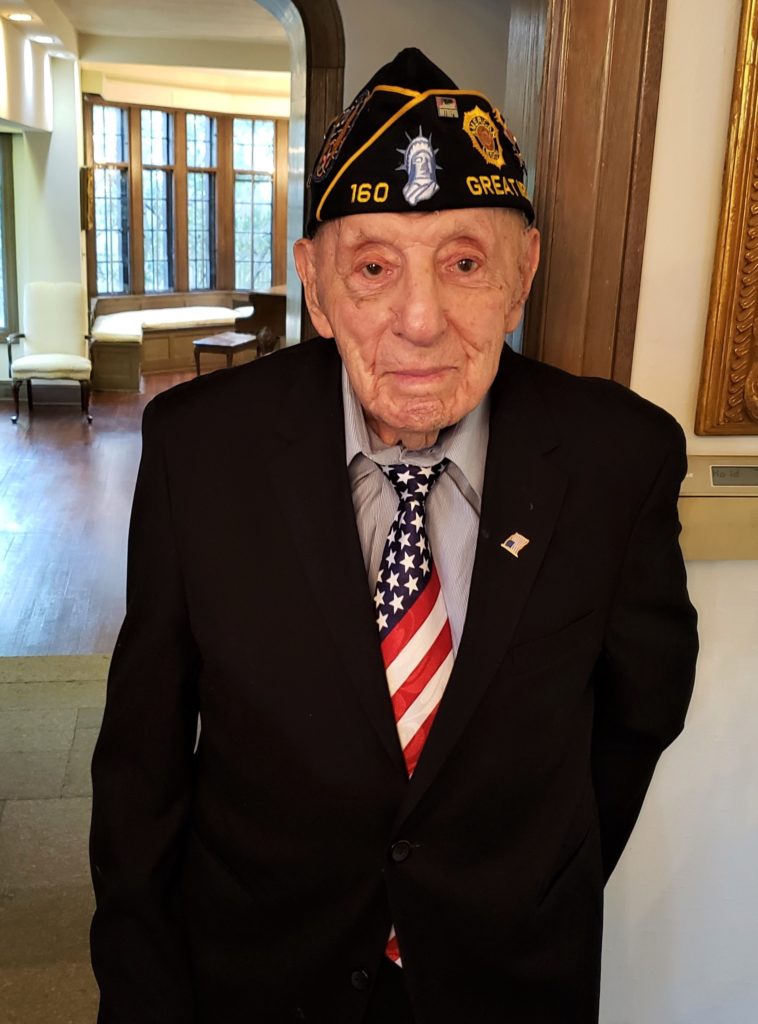 After months of ordeals, we finally secured the confirmation from Bannon’s team, and assembled an awesome lineup of speakers and honorees, including the outspoken British journalist and firebrand, Katie Hopkins, and our master of ceremonies, Rich Valdes, aka “Mr. Call Screener” for Mark Levin. We were proud to have a 100-year-old World War II Veteran, Sgt. Philip Kahn, who was more excited than anyone else to receive the honors of Veteran of the Year.  Nearly 100 advertisers stepped up to sponsor the dinner, to produce the most memorable keepsake of the dinner party, our Lincoln Dinner Journal. Beautiful raffle baskets were being assembled and tickets were selling like hotcakes!

Then the Chinese Coronavirus hit like the plague. Two weeks before the date of the dinner, gatherings of more than 500 people were prohibited. Tickets stopped selling. The following week, New York State ordered all dining and entertainment facilities closed including Antuns. After months of preparations, our 145th Anniversary Lincoln Dinner was toast.

Then came a providential outcome which turned out better than we had ever dreamed possible. We rose to the challenge and refused to be constrained by destiny’s misfortunes. Joe Concannon, who used to run video conference training sessions years ago, as head of the FBI’s New York City InfraGard Program, suggested we go digital for the Lincoln Dinner! 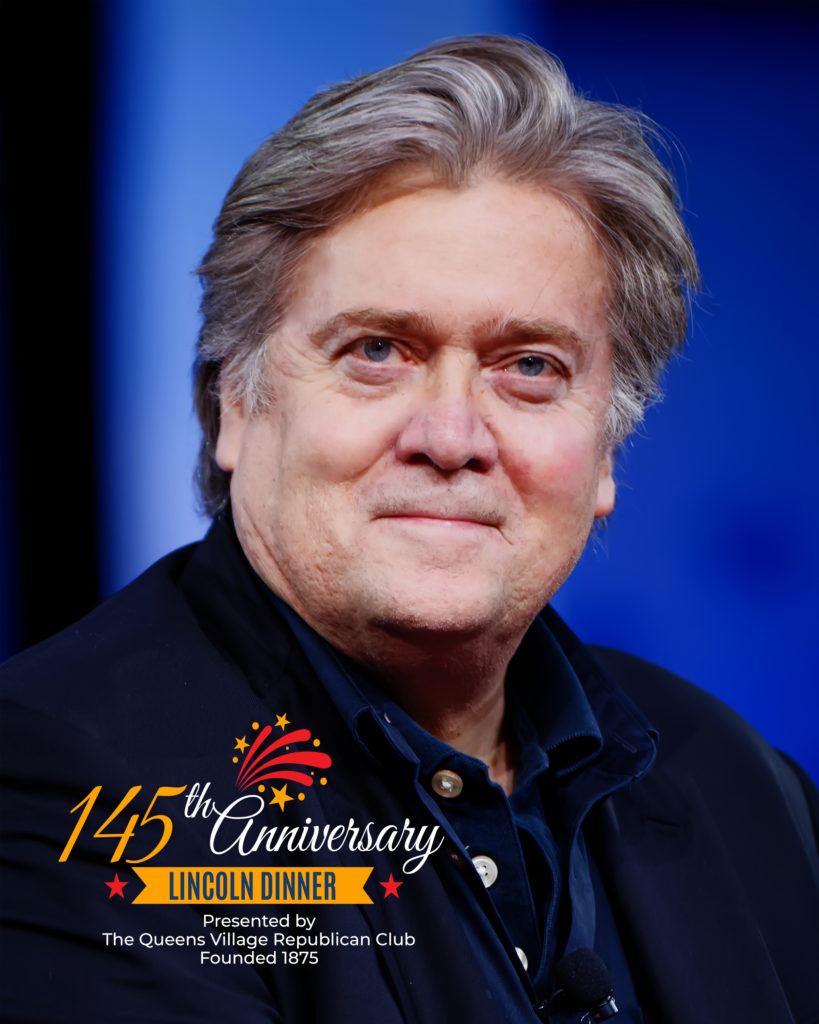 With full agreement of the club’s Board of Directors, and a dedicated team working day and night, and after nightly trial Zoom meetings, we pulled it off in a week flat! On Sunday March 22nd the historic Digital 145th Anniversary Lincoln Dinner on the Zoom Video Conferencing platform, with Steve Bannon, Katie Hopkins, and all our honorees was beamed into the homes of over 100 participants. It was a wildly successful venture as dozens of congratulatory comments poured forth such as: “let me congratulate your team for a truly incredible & informative & entertaining & incredibly impromptu virtual QVRC Lincoln Dinner.” We received kudos for an action that all conservative Americans should be taking!

After brief intros, motivational clips, and proud video messages from each of our honorees, the video program segued to the next venue, War Room: Pandemic, Steve Bannon’s personal bunker.  His “keynote” address, broken into three segments, was a direct message to patriotic Americans about the dire threat we are facing from the Chinese Communist Party (CCP), exacerbated by the pandemic we are now confronting.

We are in a hot war with the CCP, no less than with Germany in the 1930’s, Bannon warned. The CCP, composed of 10,000 people who run the country of 1.4 billion, are the most evil gangsters we’ve ever had to face since the Nazis and the Soviets. This is the great challenge that we are facing, as we stand up for the liberal democracies in our Judeo-Christian world, up against useful idiots of the CCP. No doubt Bannon was referring to the radical socialist Democrats. We are in the fight of our lives, he implored!

Our first Republican President, Abraham Lincoln, led us through our nation’s darkest years, the Civil War, and President Trump will lead us back from the brink of this pandemic, to win re-election, and witness a great resurgence of America and our economy! “No whining, no tears,” Bannon cautioned. Stand up! Deplorables will rise to the challenge! Queens Village Republican Club will live up to its great legacy! 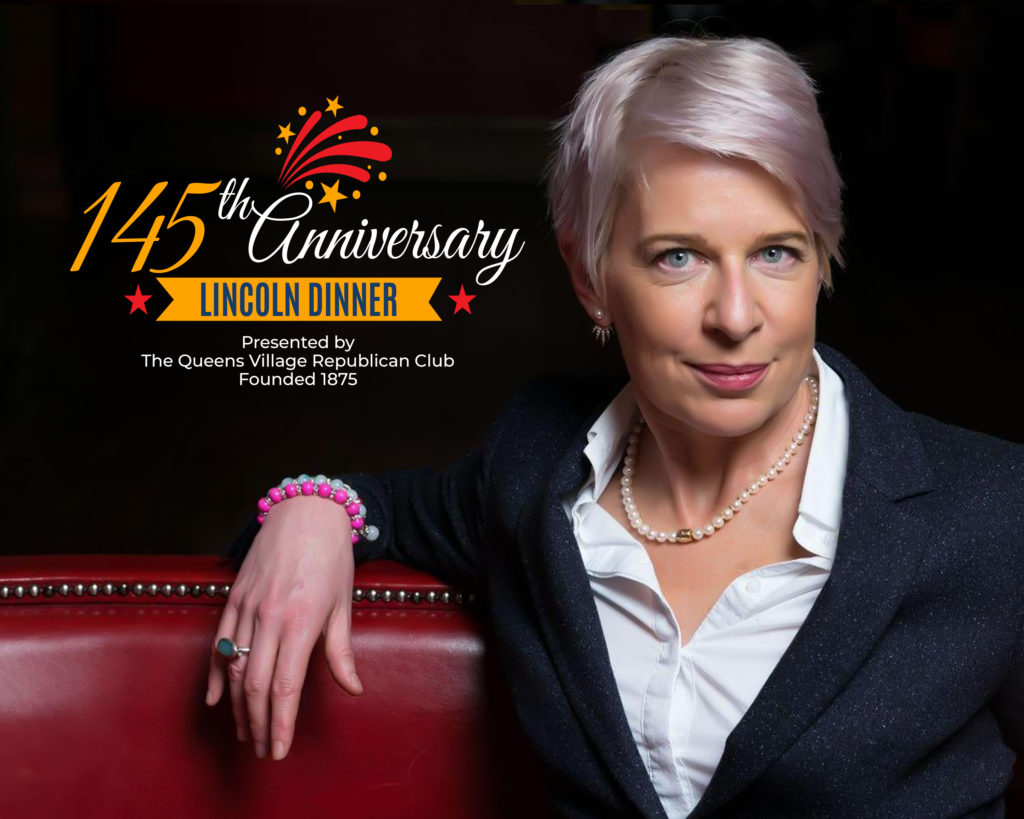 You can view the video of Bannon’s remarks on our website. You’ll also hear the encouraging and candid words of Katie Hopkins, whose USA Freedom Tour was cut short due to the pandemic. She came with a message to America – “do not become like UK!” She told her story of how she became a target for speaking the truth. They came after her job, her house, her kids, and the jihadi’s came for her head. The British thought police made her an example for all to keep their heads down, don’t speak out, or we will come after you like we did to Katie.

Her message was hopeful, to stand up proud and unafraid, to speak out for freedom, truth and for President Trump, as did 64 million Americans who elected our great leader!

Katie mentioned that this digital Lincoln Dinner reminded us that we are not alone! We are pioneers in bringing people together in the midst of this crisis that isolates us. This is a new world, and we will utilize this new video technology to bring us together. In preparation for our April 2nd Zoom club meeting on the Electoral College, please go to your App Store and download Zoom. Look for further information on our website.

The Lincoln Dinner is our annual fundraiser for the entire year. Please donate at: www.QVGOP.org. We look forward to many exciting events to share together, online and in person! Thank you for your support for America’s oldest Republican Club. 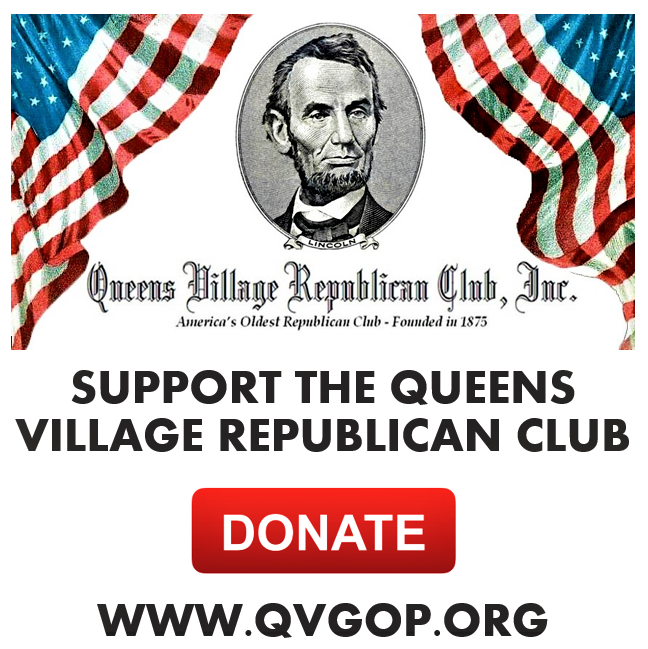 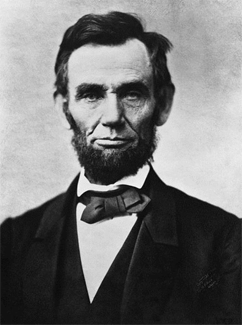 1.  You cannot bring about prosperity by discouraging thrift.
2. You cannot help small men by tearing down big men.
3.  You cannot strengthen the weak by weakening the strong.
4.  You cannot lift the wage earner by pulling down the wage payer.
5.  You cannot help the poor man by destroying the rich.
6.  You cannot keep out of trouble by spending more than your income.
7.  You cannot further the brotherhood of men by inciting class warfare.
8.  You cannot establish security on borrowed money.
9.  You cannot build character and courage by taking away man’s  initiative and independence
10. You cannot help men permanently by doing for them what they could  and should do for themselves.

“Let reverence for the laws be breathed by every American mother to the lisping babe that prattles on her lap; let it be taught in schools, in seminaries, and in colleges; let it be written in primers, spelling books, and in almanacs; let it be preached from the pulpit, proclaimed in legislative halls, and enforced in courts of justice.  And, in short, let it become the political religion of the nation.”

“It is the eternal struggle between these two principles – right and wrong – throughout the world.  They are the two principles that have stood face to face from the beginning of time; and will ever continue to struggle.  The one is the common right of humanity and the other the divine right of kings.  It is the same principle in whatever shape it develops itself.  That eternal world-wide struggle between right and wrong that runs through all human history.”

“Let us have faith that right makes might, and in that faith, let us, to the end, dare to do our duty as we understand it.”

“In regard to this Great Book (the Bible), I have only to say that it is the best gift which God has given to man.  All the good from the Saviour of the world is communicated to us through this Book.  But for this Book we could not know right from wrong.”

“I am glad to know I have your sympathy and prayers.  In the very responsible position in which I happen to be placed, being a humble instrument in the hands of our Heavenly Father, as I am and as we all are to work out His great purposes, I have desired that all my works and acts be according to His will and that it might be so, I have sought his aid.”

Ten days and counting to our 145th Anniversary Lincoln Dinner

Ten days and counting to our 145th Anniversary Lincoln Dinner.  Antuns is looking forward to our annual gathering and preparing the way forward.  For details on how Antuns is preparing for a safe, clean and wholesome event for us, see their website here: www.antuns.com

Our VIP hour is building quickly and last minute confirmations may be difficult as we limit that room to the 50 first takers.

The raffles are being prepared, balloons ordered and everything is falling into place.  Our strong Republican audience is answering our call submitting reservations and we couldn’t be prouder!

With Steve Bannon, our honorees, and firebrand Katie Hopkins, all at the ready, this event is going to get your blood moving and energy building. There will be no cancellation or postponement. Only the sounds of the elephant stampede for re-electing our President Donald J Trump this year!

Use hashtag #Onward2020 on all communications.  Thank you!