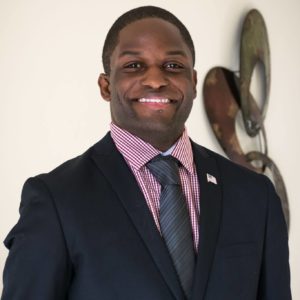 Jarret Freeman is the Republican candidate for New York State Senate in District 14 in Eastern Queens. A passionate community activist born and raised in Eastern Queens, Jarret bases the motivation of his campaign on inclusivity, increasing community participation in local politics, and, above all, putting the needs of the community residents first.

His core tenet is to make New York more competitive and create an environment where our businesses flourish. He believes in the need to create incentives for businesses to want to stay in New York and for others to be attracted to come into our state. He believes New Yorkers have been taxed enough it’s urgent to decrease the income tax for our state which hovers at 13% which is the highest for any state in the nation.

Jarret is an award-winning international relations, diplomacy and policy specialist, experienced in the public, private and non-profit sectors. He is also a philanthropist and social entrepreneur. He’s a leader passionate about education, policy and the young people of our future. He has taught in 5 countries and traveled to nearly 20 speaking around the world at conferences and seminars about vital policy decisions affecting the young people of our global community.

As a philanthropist, Jarret serves as Vice Chairman of the board for Camp Joharie, a 300-acre camp owned by Bethel Gospel Tabernacle Fellowship International in Jamaica, Queens that provides underprivileged youth with the opportunity to learn, grow and develop mentally, emotionally and physically. Jarret also serves on the boards for the International Committee for Peace and Reconciliation Inc., the Russian American Chamber of Commerce in the USA, Iowa State University’s Wrestling Club and Christ Nation Church. A former varsity Penn State wrestler and Junior Olympic swimmer and runner, Jarret enjoys the outdoors, hunting, and adventure sports.

Visit www.votejarretfreeman.com to learn more about Jarret and his policy positions and to donate and volunteer for his campaign.