Harry Wilson, the former Republican, Conservative and Independence party nominee for NYS Comptroller in 2010, is considering a 2018 run for NYS governor. He will be a guest speaker at our Club’s September 1st Meeting. He is an inspiring and brilliant speaker and stands strong on American principles. Here is his biography. 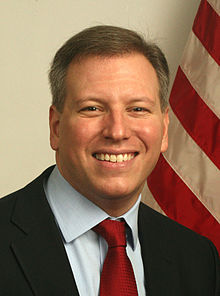 Harry Wilson was born and raised in upstate Johnstown, NY. Harry’s mother and paternal grandparents all emigrated to Johnstown from their native Greece, making Harry a first-generation Greek-American. Harry’s father, Jim, was a bartender at his brother’s restaurant, and Harry’s mother, Niki, was a stay-at-home mom until Harry was 11, when looming college commitments led her to take a job operating a sewing machine at a local factory.

In high school, Harry went on to great academic and athletic success: class valedictorian, class president for four years, team captain and MVP. His biggest honor was when he was one of only 141 high school seniors selected as a United States Presidential Scholar by President George H.W. Bush – one of the nation’s highest academic honors.

Harry became the first in his immediate family to go to college, graduating from Harvard with honors in 1993. He worked his way through college, including jobs cleaning bathrooms and driving a shuttle bus, and was the President of the Harvard Republican Club and Secretary of the Harvard Conservative Club. He later returned to Harvard, where he earned an MBA from the Harvard Business School.

After college, Harry built a highly successful career helping to fix broken companies. Over the past 23 years, he has worked with dozens of companies to overcome problems, add jobs and grow. In the last five years alone, he and his team have helped save over 50,000 jobs and created billions of dollars in shareholder value. These companies have ranged from RadioShack to YRC Freight (the biggest LTL trucking company in the US) to General Motors – the largest corporate turnaround in American history. As a result of this deep turnaround expertise, Harry is a frequent guest host on Bloomberg and CNBC, which once called him “Mr. Fix-It.”

In 2010, Harry was the Republican, Conservative and Independence party nominee for NY State Comptroller. Having never run for office before, he started off as an unknown, more than 30 points down to the incumbent, career politician Democrat Tom DiNapoli. Through a tremendous amount of hard work, roughly 100 pages of white papers and criss-crossing the state, Harry drew broad and massive support. For example, he became the first statewide challenger since Daniel Patrick Moynihan in 1976 to win the editorial board endorsements of all 3 NY City dailies. On Election Day, he won nearly 2.1 million votes and 53 out of 62 counties, the best Republican challenger showing since 1994, but narrowly lost to the incumbent. Several pundits ranked Harry’s rookie campaign the best campaign in the state in 2010. It was clear his message, of taking his turnaround skills to Albany, really resonated across New York State.

Harry and his wife, Eva, have been married for 19 years, have four daughters and live in Westchester County.