It’s been the venerable tradition of Lincoln Dinner celebrations, hosted by the Queens Village Republican Club, to present “lightening rod” speakers to energize and encourage fellow Republican patriots who are fighting overwhelming odds to win New York City elections. At a past Lincoln Dinner, keynoter Lt. Col. Allen West, the former Congressman from South Florida, charged us with the mission: “As the oldest GOP club in America, it is your duty to carry the torch for the Republican Party and its core principles for the whole nation.”

We are proud to announce, Suffolk County GOP Chairman John Jay LaValle will be our keynote speaker at the 142nd Anniversary Lincoln Dinner on Sunday, March 19. Chairman LaValle will also be honored as the American Patriot of the Year, and there is no one more deserving of this honor. As former Trump Surrogate and the NYS GOP Regional Vice Chair, he will be imparting his renowned “winning spirit” to light the fire of victory in eastern Queens, at the dinner party billed as a “Hometown Celebration” of President Trump’s great victory. This is fitting, since our president was born and raised not much more than a mile from the dinner venue at Antun’s of Queens Village, where nearly every New York Governor, New York City Mayor, and President of the United States has been in attendance since the 1950s.

Chairman LaValle’s history of victories are astonishing, from 2009 when he took over the leadership of a decimated Republican Party in Suffolk County, to today’s record of winning over two dozen Republican seats. Prior to that, he was elected in 2001 as the youngest Supervisor in Brookhaven Town’s history, and delivered the largest tax cut, 100% in 2003, in the history of New York State. 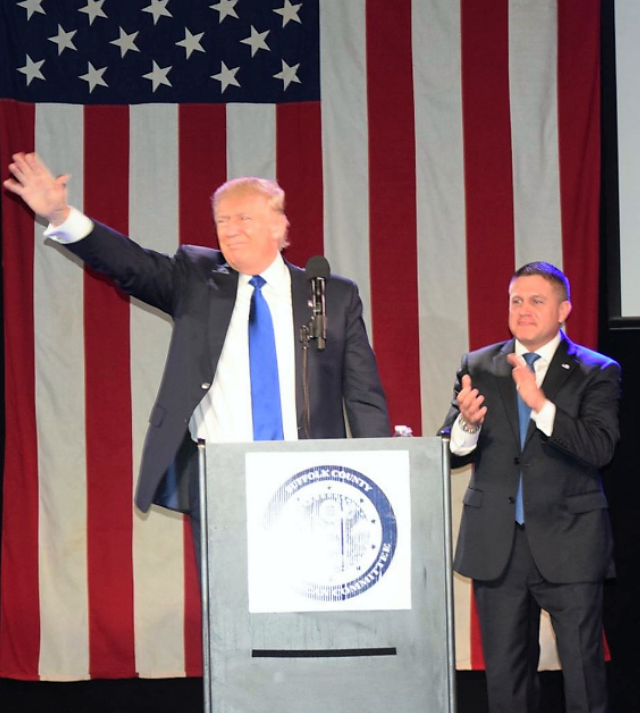 Perhaps LaValle’s greatest victory played out dramatically after he made the bold decision to publicly endorse Donald Trump from day one. He was soundly scorned in both Republican and Democrat political circles, who agreed that LaValle’s political aspirations were toast, since all good sense stood against any chance of a Trump victory, whose candidacy they viewed as a publicity stunt or worse. Nevertheless, he stood proudly with Trump, since he realized that the future of America is at stake, and he put his country above his own political future.

The opportunity of a lifetime to become part of the movement to make America great again, came when he was asked to play a key role as a “Trump Surrogate” in the historic campaign for Donald Trump to win the White House. He enthusiastically jumped on board the Trump Train and not only represented Trump on over 150 TV news shows, but also worked closely with Trump and got to know him on a personal level as a man of warmth, kindness, compassion and boundless energy.

Chairman LaValle will bring his message of boundless hope and winning spirit to Republicans in Queens, and friends from the region, on Sunday, March 19, at the gala Lincoln Dinner. In addition to the electrifying energy in the room, guests will enjoy a five-hour glorious dinner party with full cocktail hour, open bar, sumptuous sit-down dinner with the grand finale Viennese table of incredible desserts. The renowned Francis Lewis High School JROTC Honor Guard will present the Colors. Patriotic music and dancing follow up the speeches and award ceremonies. Our annual Lincoln Dinner is the most exciting and highly anticipated Republican political event of the year in NYC!

Reservations may be made securely online at www.qvgop.org or using the handy mail-in reservation form. See you on March 19th!

« PreviousAre You the Victim of “Fake News”?
Next »The Meaning of the Lincoln Dinner Celebration