“There are no second takes in the theater. There is no place for missing lines or making mistakes. You have to get it right the first time. It often brings out the best in an actor.” 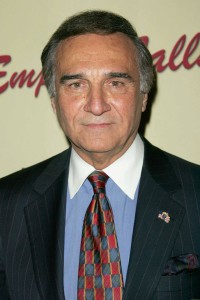 Multi award winning actor Tony Lo Bianco should be an authority on the important role that a teacher can play in the life of a student. Currently starring in the critically acclaimed one man play, The Little Flower, Lo Bianco -whose 102 performances over 4 decade movie career includes major or starring roles in the films the Honey Moon Killers, the French Connection, Blood Brothers, Jesus of Nazareth and Marciano (the latter two were TV movie productions) and whose career in television includes starring in the iconic 1980’s series Police Story – credits his initial interest in acting to his eleventh grade English teacher in Brooklyns Grady Vocational High-School.

“It was my wonderful teacher Patricia Jacobson who provided the spark that got me to first think about a career in acting,”  Lo Bianco, who has also directed and produced scores of hit movies, television shows and plays, told me when I interviewed him in his upper West Side Manhattan apartment last week. Sitting comfortably in his grey club chair in the middle of his spacious living room, Lo Bianco, speaking softly, described how he wound up attending a school designed almost exclusively for students with mechanical interests and abilities, although he had no interest in such studies, and described how his teacher Patricia Jacobson came to play such a decisive role in his life.

 “It might seem strange to people today that a kid with no interest in anything having to do with mechanics wound up attending a vocational school,” said the actor,  “But for me it was an easy decision to make. Grady was just a block from my house in Brooklyn and my big brother Joey was already going there. I come from a very close knit Italian family. My two brothers, Joseph and John, and I loved doing things together. So at Grady it was my big brother Joseph and I. And although the subjects I was taking were putting me to sleep, I was still having fun while in high school. I starred as a first baseman on the {Grady} baseball team. And in my junior year, after baseball season ended, I went to the boxing gym in a Flatbush boys club, trained and entered the NYC Golden Gloves in 1953, I believe. Won the first fight by knockout. Lost the second by decision. ”

And it was at this point in his life, Lo Bianco continued, that Mrs. Jacobson began to play a prominent role in his life and dreams. Concluding that he had no future as either a baseball player or a boxer, Lo Bianco began to listen to Mrs. Jacobson who had been telling him for a while that she believed he had natural acting ability. At her suggestion, he entered and won a class drama contest, and then entered and won a school drama contest, and finally entered and won a borough wide drama contest.  “I owed this success to Mrs. Jacobson,” Lo Bianco, his voice now more animated, told me, ”She selected the passages from the dramatic works I read for the competition. She also helped supply me with the belief that I could become an actor if I worked hard and always strove for perfection.”

Movie and television fans and critics have seen that dramatic perfection Mrs. Jacobson first instilled in him in high school played out on the small and large screens over the span of his long career. And so have theater goers and theatre critics. In the early 1980’s, Lo Bianco won an off-Broadway Obie Award for his role as a washed up baseball pitcher in  Yanks-3, Detroit -0, top of the Seventh; Lo Bianco then moved on, in a revival of Arthur Millers  View from the Bridge, playing the character Eddie Carbone, an uncle fatally obsessed with his teenage niece- a role for which he won an Outer Critics Circle Award and was nominated for a Tony.

Lo Bianco said that he loves performing on stage because,  “There are no second takes in the theater. There is no place for missing lines or making mistakes. You have to get it right the first time. It often brings out the best in an actor.” 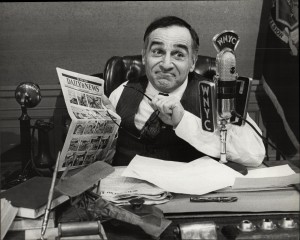 Based on the rave reviews he has received to date, what has arguably brought out the best in Tony Lo Bianco has been his performance in the role of Republican NYC Mayor Fiorello La Guardia in  The Little Flower. The play (which I had the pleasure to see in Manhattans Dicapo Theater four weeks ago) is set in Mayor La Guardias City Hall Office on December thirty first 1945, the final day of his three terms in office. Those 12 years, 1934 – 1945, saw the middle to the end of the depression and spanned the events leading up to and the fighting and winning of World War 2.

In this one character production, La Guardia, as played by Lo Bianco, who also wrote, produced and directed the play, reminisces about the tragedies he endured in his life (He lost his 1 and a half year daughter to spinal meningitis and lost his wife 6 months later to tuberculosis – he later remarried and adopted two children.), details his political career leading up to his election as Mayor (He rose up through the ranks of Republican politics, moving from city alderman, to NYC attorney general to congressman. ), recounts his support of President Roosevelt during the turbulent and tragic years of the depression and World War 2 ( He was an outspoken supporter of both Roosevelt’s New Deal economic program and the War.), and lists his greatest accomplishments as mayor ( Among many other achievements, he reorganized the NYC Police Department, created a merit based civil service system and led a successful fight against the rampant political corruption that had plagued NYC for half a century.).

 “Is there a lesson from La Guardia’s leadership and the times in which he lived that can be applied to America today?” I asked. ”Yes,” Lo Bianco quickly responded.  “We faced terrible enemies who wanted to destroy America then, and we face terrible enemies who seek to destroy us today…. While the economic problems of today do not compare to those of the depression, we still live in what is difficult economic times for many of our citizens. The lesson we should draw from the times of Roosevelt and La Guardia is that American can defeat any enemy and overcome any economic challenge if we stay strong as a nation and united as people. And we also need great leaders like Roosevelt and La Guardia.”

When not on regional tours with  The Little Flower, which takes him to theaters and entertainment centers from New York to New Jersey, South Carolina and Florida, Lo Bianco, the father of 3 grown daughters and six grandchildren, told me he tries to spend as much time as possible with his family.

While at first reticent about it, Lo Bianco devotes a good deal of his time to charities. The actor has a long history of involvement with foundations seeking treatment and cures for Juvenile Diabetes, Cooley’s Anemia and Lupus. A passionate advocate for our veterans and our active service men and women, Lo Bianco has also volunteered his time on behalf of the USO, the Wounded Warriors and Building Homes for Heroes organizations. Lo Bianco said with the marked sound of passion in his voice, ”We want to continue to do every thing possible to support our wounded veterans and all our uniformed heroes who keep us safe and make America the greatest country in the world.”

I left  The Little Flower thinking Lo Bianco is a great actor and left the interview believing he is also a great guy.

« PreviousAvoiding The Subject, Congressman Israel?
Next »Senator Lee Zeldin: On the Radar List