….his children are the most important reasons behind his decision to run for Congress. “ Just like all parents”, he said, “ I love my children with all of my heart and soul. I want to be elected to Congress to help insure that my two daughters and all children throughout our beautiful land will continue to enjoy the freedom and opportunity that has made America the greatest nation in the history of the world.” 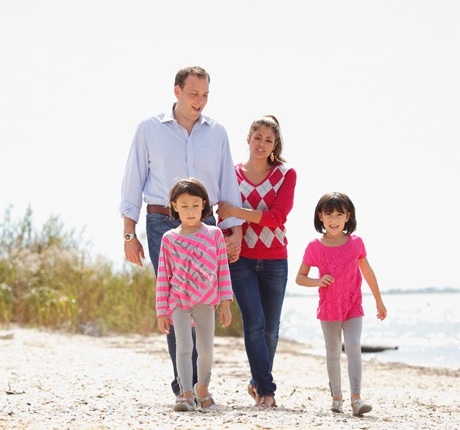 This past November the National Republican Congressional Committee (NRCC) informed 34 year old attorney Senator Lee Zeldin, whose NYS Suffolk County Third Senate District covers major portions of Islip and Brookhaven, that he would be placed on their congressional candidate “ Radar List’’. The NRCC, which is known to have its eyes set on expanding its current hold of 34 seats in the House of Representatives, reserves placement on this list to Republican congressional candidates in competitive races thought to have legitimate chances of winning in this coming fall’s election. Placement on this list is known to be followed with what the NRCC has written to be, “ the tools they [the candidates} need to run successful winning campaigns against their Democrat opponents.”

NRCC’s selection of Zeldin came within weeks after the State Senator made his announcement to seek the Republican nomination to challenge 6 term incumbent Democrat Tim Bishop in the first Congressional District. The First District, which, running from Smithtown to Montauk is the most eastern district in the state, has been in Democratic hands since Bishop was first elected in 2002. Zeldin told me in a recent interview that he viewed placement on this list as, “ A tremendous shot in the arm to my campaign… The support we will receive [from the NRCC} is crucial in our effort to get out our message of how to build a strong economy at home and how to be trusted by our friends and respected by our adversaries abroad.”

It is general knowledge in Republican circles that Zeldin was not placed on the “Radar List” by chance. A sitting State Senator first elected over Democrat incumbent Brian Foley in 2010 and reelected against Democratic challenger Francis Genco in 2012, both times with margins in the double digits, Zeldin is said to bring to the Republican Party an already established political organization, a strong voter base and a well known conservative voting record as a State Senator. All of which, however, didn’t discourage George Demos, a relatively unknown former SEC enforcement attorney, from challenging him in the coming Republican Party June primary.

However, both Democratic and Republican insiders across Suffolk County give Demos, whose funding has been reported by several other newspapers to come almost exclusively from California Democratic donors, no chance of winning the primary and believe virtually unanimously that it will be a Zeldin vs. Bishop contest this coming November.

Concerning Demos’ ties to Democratic donors Zeldin commented, “ I find it a bit strange that a candidate being funded by Democratic Donors in California suddenly emerges to run in a Republican Primary in a race that Republicans have a real chance to win.” And then, quickly referring to internal polls showing he maintains a huge lead over Demos, Zeldin added, “ You never want to be over confident in politics, but we feel confident we will win the primary and will be prepared and ready for the fall campaign.”

Zeldin had better be prepared and ready for his presumed race against Bishop. The 64 year old incumbent congressman has proven over the past ten years to be a very formidable politician. After defeating the then one term Republican incumbent Felix Grucci in 2002, Bishop went on to win the 2004, 2006 and 2008 elections by double digit margins. Bishop’s opponent in that 2008 race was the
then political neophyte Lee Zeldin himself.

Those double digit margins, however, evaporated in the 2010 election against Republican candidate Randy Altschuler. Bishop went on to win that race, the closest congressional contest in the nation that year, by a mere 50.2% to 49.8%, leaving many Republicans predicting at the time that Bishop would be defeated in 2012. That prediction didn’t come true, however, as Bishop- running with a growingly unpopular in the district President Obama on the top of the ticket – still managed to defeat Altshuler again: This time with a 52.5- % to 47.5% margin, which left many Democrats and even some Republicans regarding Bishop as an unbeatable political Houdini.

Zeldin, however, scoffed at the suggestion that Bishop is unbeatable. Pointing to the 19 thousand voter edge that Republicans now hold over Democrats in the First Congressional District and noting that the Conservative Party, which has already endorsed him has approximately 11,000 registered voters, Zeldin told me, “ I believe those numbers indicate the First Congressional District is at its heart a moderate to conservative district. Mr. Bishop has done a good job in the past of deceiving the voters by portraying himself as a moderate Democrat. But I believe the voters are now seeing through this deception, so if, as I plan to do run an effective grass roots campaign, I believe I can win”.

Such an effective campaign, Zeldin explained, involves explaining to voters how, if elected, his future votes on key legislation would contrast with those Bishop has cast in the past- something, he admitted, he failed to do six years ago “ Six years can be a lifetime in politics”, stated Zeldin. “ It will be my job to show voters how my voting record in the State Senate these past four years- a record I didn’t have in 2008- will indicate how I will vote in the House of Representatives, and how that differs from the voting record of Mr. Bishop.

“As a state senator”, Zeldin continued, “ I was a leader in passing legislation that enacted the most significant property tax cap in America, and I also successfully worked on legislation that helped reduce the income tax paid by middle class New Yorkers to the lowest level in six decades…. By contrast Mr. Bishop as a congressman voted for just about every bill that was introduced by President Obama and the Democratic leadership. Much of that contained wasteful spending which has increased the power and reach of the federal government and has resulted in an increase of over six trillion dollars to our national debt, adding up to a total debt of a staggering 17 trillion dollars- a debt, unless decisive actions are taken, that will be transferred to our children and grandchildren.”

Moving to an issue that he has not directly faced on a state level, Zeldin added, “ The issue most on the minds of many voters I meet remains Obama Care. Mr. Bishop was first a major supporter, then a defender and now an apologist for a program that is displacing patients from their doctors and causing real harm to them and their entire families…. If elected, my first domestic priority will be to help repeal Obama Care and replace it with real health care reform, that will improve upon, not destroy, what was once the best health care system in the world.”

Still, Zeldin reserved his harshest criticism of Bishop for issues other than what Zeldin believes to be misguided votes on the budget and health care. “ It is the responsibility and moral duty of a congressman to speak out against the actions and policies of any president, even one of the same party”, Zeldin asserted. “ And yet, Mr. Bishop has been silent about the Administration’s use of IRS to target conservative, Christian and pro- Israeli organizations…. He has been deafeningly silent about the Administration’s stonewalling of the Benghazi and the “ Fast and Furious” Investigations…. He has been silent as the Obama Administration has consistently taken positions that threaten the very survival of our closest ally Israel.”

Asked to be more specific on his criticism of the Obama’s Middle East policies Zeldin stated, “ President Obama is the first President to explicitly endorse the pre-1967 borders as a basis for negotiating the future contours of a Palestinian state. Discussions based upon such borders is, he should know, a nonstarter for Israel, which would be unable to defend herself within such narrow borders and would have to uproot hundreds of thousands of its citizens from their homes.

“And this position”, Zeldin elaborated, “ seems to be consistent with the policies of a President, who, in my opinion, views the world in general, and the middle east in particular, from an upside down perspective. In this upside down Middle East world, President Obama calls {Palestinian Authority President} Mahmoud Abbas, who celebrates suicide bombers as martyrs, a man of peace, and suggests that {Israeli} Prime Minister Netanyahu, who continues to plead, without any response, with Abbas to sit down in one to one discussions with him without any preconditions to reach a fair and lasting peace agreement, is the real obstacle to peace in the Middle East.”

Zeldin was also very critical of how the Obama Administration has handled the Iranian Nuclear threat. He stated, “ The President’s answer to Iran’s growing program to develop nuclear weapons was to reduce the sanctions against Iran. This was done in an interim deal reached this past November in Geneva…. I strongly oppose this deal. Beyond all logic and reason, it allows Iran to continue nuclear enrichment and does not require this terrorist sponsoring state whose goal is to wipe the state of Israel off the face of the map to destroy its already enriched uranium. This very uranium can be used to build nuclear weapons…While it sometimes seems that the Obama Administrations is prepared to accept a nuclear armed Iran, such an occurrence would be a nightmare to the entire world…. Iran must never be allowed to possess nuclear weapon.”

Zeldin who from 2003-2007 served as an Active Duty officer with the U.S. Army, including a deployment to Iraq as a member of an airborne unit in 2006 currently holds the rank of major in the Army Reserves. “ I joined the military ”, he said, “ because I understand that the freedom and liberties we enjoy can never be taken for granted…9/11 taught us we have enemies who seek to take that freedom and liberty from us and seek to murder Americans and destroy America…I feel the greatest honor is to help protect our country and its people. That is why I served as a United States Paratrooper in Iraq and that is why I serve as a Major in the United States Army Reserves today.”

Zeldin, a Jewish Long Island native who together with his wife Diana is raising their seven year old twin daughters, Mikayla and Ariana, told me that his children are the most important reasons behind his decision to run for Congress. “ Just like all parents”, he said, “ I love my children with all of my heart and soul. I want to be elected to Congress to help insure that my two daughters and all children throughout our beautiful land will continue to enjoy the freedom and opportunity that has made America the greatest nation in the history of the world.”

Maybe that is the real reason the NRCC placed him on their radar list.