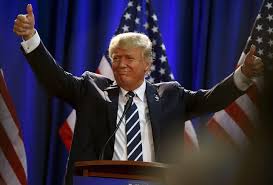 The most unlikely candidate for president, President-Elect Donald J. Trump, has achieved a monumental upset against Hillary Clinton. He now has won the most powerful position in the world. And added to the fact he never ran for public office before. Yet he has done so because of his love for the America and the American people. President-Elect Donald Trump ran for the highest office in the nation because he believes America could do better for the hard working people who he believed were forgotten. Hillary Clinton lost in part because she ran against a man who had a greater vision and a dream for all Americans. Now is the time to unite America, regardless of what divides us with so many problems that need to be addressed. I believe President-Elect Donald J. Trump is the personification of his slogan which is,” Make American Great Again.” That is because he has a dream that he believes can be achieved. In closing let me wish President-Elect Trump success, for  “We the people are counting on you!”

« PreviousAll Politics is Local – Get Out and Vote!
Next »Remember Our Veterans