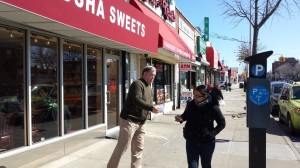 Calling it his “Small Business bill tour,” Rep. Steve Israel was campaigning on March 18 at Usha Foods Inc. on Hillside Ave in Floral Park.  Joseph R Concannon and Phil Orenstein were there to protest. Concannon talked with reporters and passersby asking when will Rep. Israel repeal the Affordable Care Act which is destroying jobs and harming businesses across America. A reporter from the Queens Tribune smeared Concannon with the following online and hard copy news report:

Posted on March 27, 2014 by tribune in QConfidential

A former Northeast Queens City Council candidate stuck his head in to an event that had nothing to do with what he complained about.

The Congressman was touring the area to announce a bill that would let businesses with less than 50 full-time employees deposit up to 10 percent of their gross profits per year into a special savings account.

While on the tour, Concannon popped into one of the stops to complain to Israel about the Affordable Care Act. He told Israel to repeal the ACA because it’s decreasing jobs in America, calling it “the biggest job killer in America.”

Concannon quickly left after sticking his head in the tour, but still handed out pamphlets while the event was ongoing. Israel quipped back with a comment of his own, though, saying there are anger management classes offered not too far from where the tour was.

Nice comeback Congressman. As for Concannon, you may want to take up Israel’s suggestion. It might help you mellow out just a bit.

Mr. Concannon replied and his letter was published the following week:

Posted on April 3, 2014 by tribune in Letters with 0 Comments

This letter is in response to the article “Northeast Queens Face-off” (Queens Tribune – March 27-April 2) on my message to Congressman Steve Israel on his small business tour.

I want to thank Congressman Steve Israel for the headline and his quick comeback. But regrettably he’s missing the main point.

While his legislation is helpful, it’s like bailing out the ocean with a thimble, since small businesses have been hit especially hard by the financial crisis. The elephant in the room is the Affordable Care Act, aka Obamacare, an issue which Congressman Israel avoids like the plague. I tried to bring it up when I called it “the biggest job killer in America” in order to shed light on the crippling federal legislation and mandates that are hurting small businesses the most.

« PreviousA Wake Up Call to all New Yorkers
Next »Tony Lo Bianco: More than Just a Great Actor