A Wake Up Call to all New Yorkers

“The battle for zoning in Westchester County [will be] the battle everywhere. This is about changing every block, every neighborhood to the viewpoint of federal bureaucrats at HUD.” 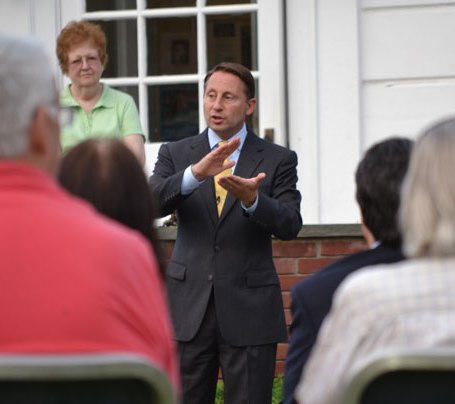 Early in March, Westchester County Executive Rob Astorino announced he is running for governor. The Republican Astorino easily won his second term as County Executive by a wide margin in a heavily Democratic County, due in large part to voter outrage about the overreach of the federal government regarding the county’s 2009 affordable housing settlement  with the U.S. Dept. of Housing and Urban Development (HUD). Westchester County was singled out as a suburban community symptomatic of alleged racial abuses in housing and was sued by HUD for housing discrimination. The 2009 settlement required Westchester to build 750 affordable housing units in high-income, white neighborhoods and “market them aggressively” to minorities.

HUD and Westchester County have been embroiled in the ongoing housing discrimination battle for years, over the federal government’s efforts to dismantle local zoning and force the upscale suburban neighborhoods of Westchester to accept Section 8 and low-income housing. Astorino warned: “The battle for zoning in Westchester County [will be] the battle everywhere. This is about changing every block, every neighborhood to the viewpoint of federal bureaucrats at HUD.”

According to Astorino, Westchester has been in compliance with the HUD decrees, but HUD has not been holding up its end of the bargain. The social engineers at HUD still see statistical evidence of racial discrimination, and are now pushing for the County to build 10,000 more affordable housing units. They are pressing Westchester landlords to accept Section 8 vouchers (public assistance) for rentals, which residents warn will usher in housing crime, drugs and lower property values. HUD sees Westchester’s zoning laws as exclusionary and discriminatory.

However, Astorino asserts that there is no racial discrimination or exclusionary zoning in Westchester. Anyone from any minority group can live anywhere they want in the County, the only hurdle being economics. People live where they want to live and where they can afford to live. A home is the cornerstone of the American Dream and people who work hard all their lives for their own property and put their life’s equity into their homes, should not have to experience their property values plummeting due to Section 8 rentals next door because of the decrees of some unelected bureaucrats. Federal agents are stealthily seizing our property, our rights and our liberties.

Here in New York City, HUD does not have to bother with a lawsuit against the City of New York, because Mayor de Blasio is already doing the work of the federal zealots at HUD right here at City Hall. The Mayor unveiled his utopian dreams for NYC when he recently vowed to create 200,000 affordable housing units within 10 years, and has put together a team of three dozen affordable housing and welfare advocates who met behind closed doors to implement his bold new plan. De Blasio also announced a cash infusion of $52.5 million to the New York City Housing Authority as a major step towards his goal. Additionally, the Domino Sugar refinery redevelopment deal was a victorious affordable housing deal for the de Blasio administration since it increased to 30% the proportion of luxurious waterfront view affordable housing units that the developer has to build, subsidized by the taxpayers.

An active player in the radical housing agenda for NYC is City Councilman Jumaane Williams, whom you may remember as the leading sponsor of the Community Safety Act, the City Council’s legislation that handcuffed the NYPD and curtailed “stop, question and frisk.” He is the newly anointed chair of the City Council Housing Committee and will be intimately involved in Mayor de Blasio’s goal of 200,000 affordable housing units. In fact Williams believes that 200,000 would not be enough units to satisfy the growing population.

It is impossible to build 200,000 new units of housing in NYC. Mostly, the city will be shuffling low-income Section 8 renters into middle class communities. They will be shuttled into existing co-ops, homes and foreclosed properties in Bayside, Middle Village, Forest Hills, Bellerose, Floral Park and many other peaceful, safe residential communities throughout the city.  Our communities will become underserved and overcrowded as our schools, hospitals, police, sanitation and fire services are taxed to the limit to serve the burgeoning new socially engineered population in the outer borough neighborhoods. Congestion, crime, violence, drug use and neighborhood deterioration will ensue, as the characteristic unintended consequences of government welfare programs gone off track.

The failed progressive wealth redistribution policies to funnel the prosperity of the middle class to the poor, in order to help them afford housing have been implemented over the past 50 years with the appropriation of trillions of taxpayer dollars and have failed miserably. This welfare agenda has never helped the poor people it was intended to help in the first place. Fifty years after President Johnson launched the War on Poverty, government assistance in the form of cash welfare, subsidized housing, food stamps, Medicaid and more, soared to over $20 trillion. Poverty still remains at nearly the same statistical levels it was at in 1964. Johnson’s War on Poverty promised to lift the poor out of poverty and into the middle class, but it never happened.

The New York Post editorializes on the only common sense solution to help people rise out of poverty: “The problem is that poverty is not about a lack of money. It is about the lack of the life skills people need to rise in society and provide for themselves and their families. No army of bureaucrats spending trillions in tax dollars can ever substitute for the only real path to a middle-class life: hard work and personal responsibility, combined with a growing economy creating jobs and opportunity for all.”

This is the defining issue that will mobilize the voters as Mayor de Blasio’s destructive policies take effect. The way to counteract this looming disaster is to build the Republican Party from the grassroots up. I invite each and every concerned New Yorker to do the tireless work of developing a new demographic of registered voters and talking about our shared values of freedom, hard work, education, personal responsibility and the pursuit of the American Dream. The next step is finding capable community leaders who uphold these values, grooming them to be persuasive candidates, and finally, winning elections in order to stop the ultra progressive agenda from destroying our city.

« PreviousCLUB WILL MARCH IN THE MEMORIAL DAY PARADE ON MAY 26
Next »Avoiding The Subject, Congressman Israel?