Evil thrives when good people do nothing!

The following letter by Queens Village Republican Club member Fred Bedell are heartfelt words that must be said. It was sent out to our local Queens weeklies and regional newspapers.

Evil thrives when good people do nothing!

This truly is a most sad time for the City of New York and the country, as two police officers were executed in cold blood while in their patrol car serving the community. They were officers Wenjian Liu and Rafael Ramos. This took place in Bedford-Stuyvesant, Brooklyn and this heinous act was perpetrated by a most deranged individual who hated police, named Ismaaiyl Brinsley. My heartfelt prayers go out to their fellow officers, friends and families as they grieve for two fine officers. There is, however an atmosphere of hate generated by certain community leaders like Al Sharpton and others like him at protests across the country. Mayor de Blasio and certain members of the city council have further fueled the fire of mistrust, disrespect, and a complete disregard what our brave men and women do every day. The members of the NYPD risk their lives each and every day protecting and serving the community with honor and distinction. And yet there are those in these communities who seek to harm them. It’s time to stand up for the NYPD in their support. I’m a member of the Republican Club of Queens Village, which is the oldest in the country and was started in 1875, and we will be holding a rally in their support. This will take place on Tuesday January 13th 2015 at 12:00 noon, in front of Queens Borough Hall. This is located at 120-55 Queens Boulevard, Kew Gardens. For more information contact Captain Joseph Concannon at jconcannon@joe4ny.org. Let all concerned law abiding citizens show up in support of our Finest on that day. These attacks upon our Finest must stop.

Remember this too: Evil thrives when good people do nothing! 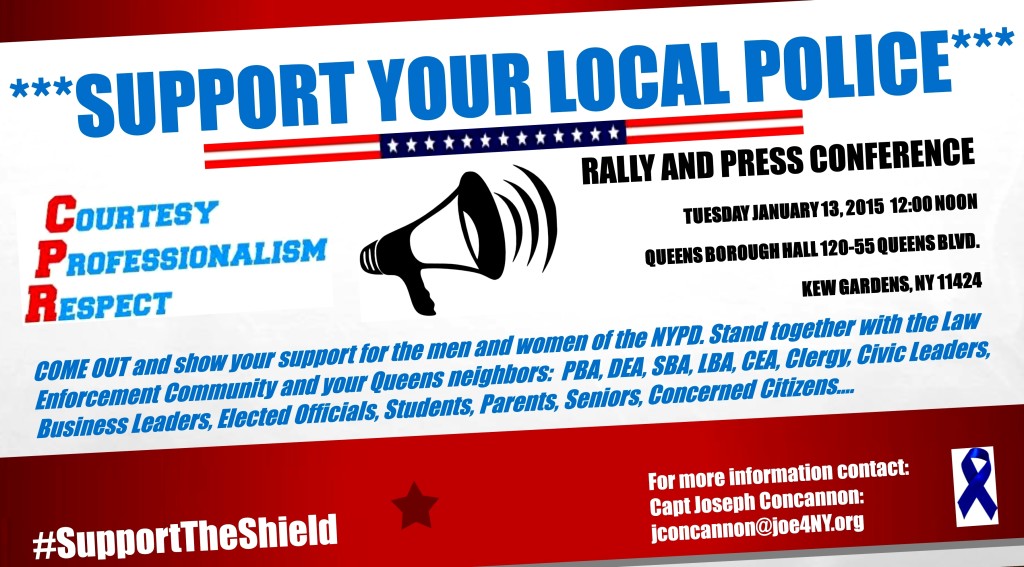