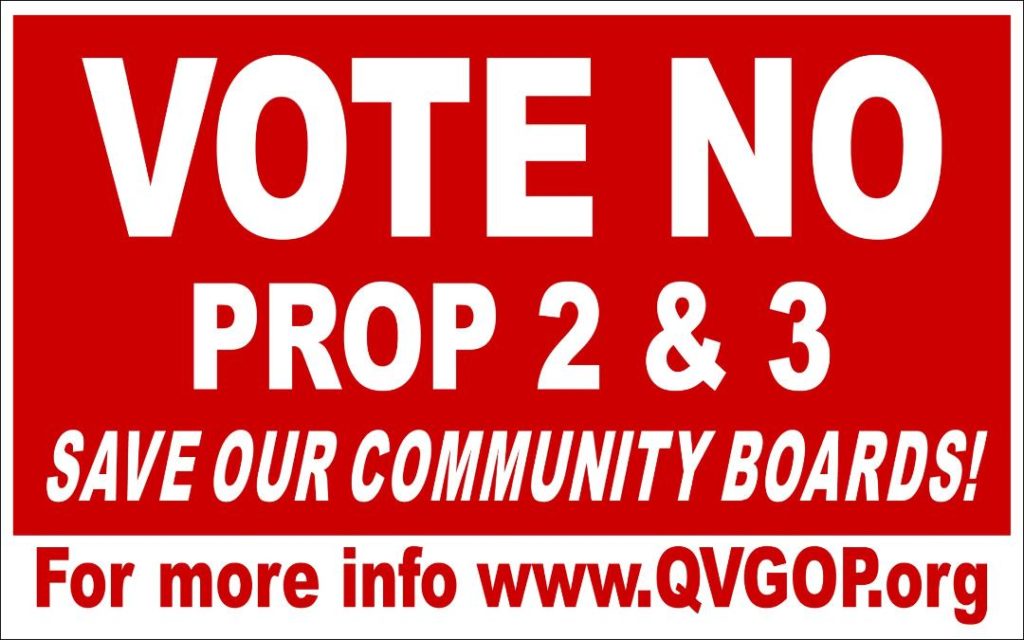 What do you think of the 2018 ballot proposals?

The New York City Campaign Finance Board invites New York City voters and interested organizations to submit statements on the three proposed amendments to the City Charter that will appear on the back of the ballot on November 6. The statements should advocate for either a “yes” or a “no” vote on the proposals. Statements will be published in the city’s official online Voter Guide.

City voters will decide three ballot questions proposed by the 2018 Charter Revision Commission.  In addition to the abstracts linked below, more information about these questions and the Commission is available by reading the Commission’s final report.

How to submit a statement: Open our submission page and, in 200 words or less, clearly state your support or opposition to one of the proposals. Be sure to include specific reasons why New Yorkers should vote either yes or no. Anonymous statements will not be considered. All accepted statements will be posted on our website as part of our voter education efforts for the 2018 general election.
Statements received by 5 p.m. on Friday, September 28th will be published in the Guide when it goes live.

1) Campaign Finance (Read the abstract for this question)

This proposal would amend the City Charter to lower the amount a candidate for City elected office may accept from a contributor. It would also increase the public funding used to match a portion of the contributions received by a candidate who participates in the City’s public financing program.

In addition, the proposal would make public matching funds available earlier in the election year to participating candidates who can demonstrate need for the funds. It would also ease a requirement that candidates for Mayor, Comptroller, or Public Advocate must meet to qualify for matching funds.

2) Civic Engagement Commission (Read the abstract for this question)

This proposal would amend the City Charter to:

Create a Civic Engagement Commission that would implement, no later than the City Fiscal Year beginning July 1, 2020, a Citywide participatory budgeting program established by the Mayor to promote participation by City residents in making recommendations for projects in their communities;

Require the Commission to partner with community based organizations and civic leaders, as well as other City agencies, to support and encourage civic engagement efforts;

Require the Commission to establish a program to provide language interpreters at City poll sites, to be implemented for the general election in 2020;

Permit the Mayor to assign relevant powers and duties of certain other City agencies to the Commission;

Provide that the Civic Engagement Commission would have 15 members, with 8 members appointed by the Mayor, 2 members by the City Council Speaker and 1 member by each Borough President; and

Provide for one of the Mayor’s appointees to be Commission Chair and for the Chair to employ and direct Commission staff.

3) Community Boards (Read the abstract for this question)

This proposal would amend the City Charter to:

Impose term limits of a maximum of four consecutive full two-year terms for community board members with certain exceptions for the initial transition to the new term limits system;

Require Borough Presidents to seek out persons of diverse backgrounds in making appointments to community boards. The proposal would also add new application and reporting requirements related to these appointments; and