Judicial Watch & the Fight Against Corruption in New York

Judicial Watch & the Fight Against Corruption in New York 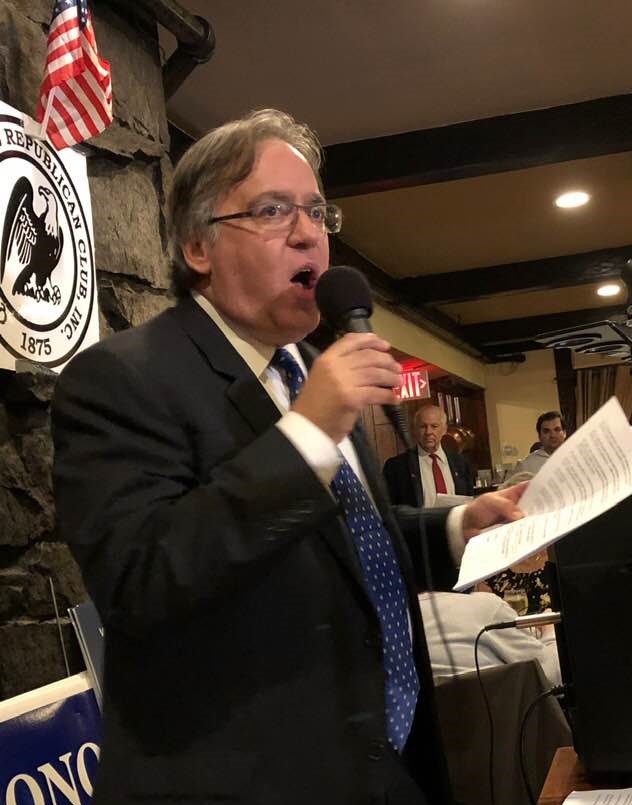 On October 4, I had the pleasure of speaking to the Queens Village Republican Club about Judicial Watch’s fight against corruption in New York. We’ve been fielding requests for copies of the speech ever since, so we’re reprinting an edited version here:

Judicial Watch takes a lot of heat in the public arena, but in fact we are not a partisan group. Our mission is public education. We educate through investigations, litigation, journalism and public outreach. Increasingly, our public education efforts include the rapidly expanding world of social media.

We use national and state transparency laws to fight corruption and malfeasance in public office. Our weapon of choice is the Freedom of Information Act, or FOIA. We lead the nation—including all the major news organizations—in filing and litigating freedom of information actions. These are powerful tools for holding public officials accountable.

New York is the financial and media capital of the world and deserves special attention in the fight against corruption. New Yorkers take corruption seriously. Poll after poll shows that corruption ranks among the top concerns of New Yorkers.

That same month, a Quinnipiac poll showed that 45% percent of New Yorkers ranked corruption as a “very serious” concern.

Corruption has a long history in New York. It includes the notorious Tammany Hall, a corrupt political machine that dominated city politics for more than a century. Judicial Watch has raised questions about whether the city has entered an era of a new, more sophisticated Tammany Hall, with sketchy financing from international players, power brokers in Albany ruling with an iron fist, and influential non-profit entities like the Clinton Foundation making an end run around the law.

With a new generation of corrupt enterprises, new challengers have begun to emerge as well.

But who are the corruption fighters of tomorrow and how will they do?

In this regard, the case of an obscure corruption expert with the wonderfully musical name Zephyr Teachout is worth considering.

Teachout put the fear of political death into New York Governor Andrew Cuomo in the 2014 gubernatorial primary, gathering 34% of the vote. She ran on an anti-corruption platform. She went on later to lose to Republican John Faso for a seat in the House of Representatives. Earlier this year, she lost again, this time to Democratic machine favorite Letitia James in a race for New York attorney general.

But in each case, Teachout did surprisingly well.

Teachout is a Democrat, but when it comes to corruption, conservatives and Republicans in New York often find themselves cheering her on.

New York City is a Democratic stronghold, and so much of the corruption we see comes at the hands of Democrats. The list of corrupt Democrats is long. It includes:

Sheldon Silver, the powerful former speaker of the New York State Assembly, who went down on corruption charges earlier this year.

Joseph Percoco, one of Gov. Cuomo’s closest allies, sentenced last month to six years in prison for accepting bribes in a sweeping corruption case that also netted other Cuomo associates.

The governor himself, lest we forget, disbanded his own corruption inquiry, the Moreland Commission, in 2014.

Former state assemblyman William Scarborough of Queens was convicted of abusing over $70,000 in state and campaign funds.

Former state assemblyman Eric Stevenson of the Bronx was convicted of taking bribes.

Former state senator Shirley Huntley of Queens admitted to embezzling more than $80,000 from an educational non-profit she controlled.

The list goes on. And Republicans are no angels either. The Republican Hall of Shame includes:

In Albany, the assembly speaker and the senate majority leader, along with the governor, are known as the “three men in a room.”

“Three men in a room” is New York political shorthand for how ultimate power is wielded in the state capital.

The three men in a room control the levers of power in state politics. It’s one of the reasons that corruption is such a problem in New York.

No dissent, no debate, power concentrated at the top. Corruption flows down from the top. The fish rots from the head.

What is to be done?

Let me tell you what Judicial Watch does.

We’re lately famous for several investigations: the Hillary Clinton emails case; the Benghazi affair; and most recently, inquiries into the controversial activities of President Trump’s opponents inside and outside government. But we are an equal-opportunity offender. We’ve gone after Republican and Democratic presidents and a long line of public officials from both parties.

We wage our campaigns through a combination of investigations, freedom of information litigation in federal and state courts, and raising public awareness through media appearances and our own social media efforts.

Ohr is a Russian organized crime expert and an associate of Christopher Steele, the former British intelligence official who compiled a salacious dossier on Mr. Trump. Our investigative team recognized that there could be valuable information in those 302s. We filed a FOIA request with the Justice Department. They turned us down. We sued them.

In another recent Judicial Watch case, we sued the Secret Service after they denied us records related to the costs of president travel. The president is a public servant. When he spends our money, we have a right to know how much he spends. Judicial Watch calculates that President Trump has spent more than $17 million for travel to his Mar-a-Lago estate and elsewhere. But the Secret Service is withholding some travel records.

Litigation is one of the secrets of Judicial Watch’s success. Thanks to our devoted donors, we have the financial and legal firepower to take on the government through complex and often expensive litigation.

But how does this apply to the fight against corruption in New York? How can New Yorkers fight corruption?

I think four key points can be gleaned from the Judicial Watch experience.

Point One: Invest in Investigations. Because New York City is the financial and media capital of the world, it always will deserve special attention. In Judicial Watch’s case, they invested in an on-site investigative reporter (me) and provided resources to investigate credible allegations of corruption. Investing in investigations, when it comes to freedom of information laws, also means investing in litigation: if you can’t sue, you need to find someone who will do it on your behalf.

Point Three: Be Open to the Other Side. Right here in Queens, the Democratic Party has just imploded. Party boss Joe Crowley was unseated in a primary by a 28-year-old activist. The Democrats in New York are in turmoil. What can conservative and Republicans learn from the tumult in the Democratic Party? Do liberals feel the same way about corruption as we do?

I can tell you, the answer to that last question is yes.

Point Four: Be Open to New Ideas. Earlier, I mentioned the New York anti-corruption crusader Zephyr Teachout. Sure, she’s a lefty Democrat, but she has some really good ideas. Her positions include re-opening the anti-corruption Moreland Commission, strengthening legal units prosecuting public-corruption, taking on lawmakers and lobbyists, and being tougher on powerful interests abusing their positions. Those are ideas conservatives can agree with.

Investing in investigations. Litigating FOIA. Making the media, particularly social media, your friend. Practicing watchdog journalism even if you’re not a journalist. Being curious about the other side and open to new ideas. That’s a recipe for fighting corruption in New York and elsewhere.