Our Schools, Our Future, Our Failure

Our Schools, Our Future, Our Failure

Today I participated in a non-partisan rally to protest the co-location of another school inside the I.S. 109 school building in Queens Village, NY. Our children’s education is the gateway to the American Dream and freedom. Present at this rally were: 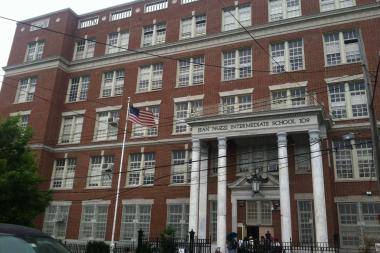 Members of the community that were present asked me what could they do. Voter registration is of course job one I explained. Every one needs to be registered to vote and vote in each and every election. Next I explained that the school’s parents must be engaged not only with their children, but the school itself. An engaged school family community will reap great rewards and enrich the school experience for our children in innumerable ways.

I stated today that the school had lost the confidence of the surrounding community and as a result the school has a vacancy rate which the Panel For Educational Policy (PEP) of the NYC Board of Education is looking to take advantage of. I looped back to Senator Comrie’s comments that for 18 years the school had been neglected by the City of New York. I agreed with Senator Comrie who stated that when the Mayor and his team come to Albany seeking Mayoral control of the schools, IS 109 is not a good example of what happens when the Mayor has control. IS 109 is an abject example of a school community that is academically successful, but failing to win the confidence of the surrounding community, thus increased vacancy, and BOE attention to place a charter school inside to fill the gap. Communities need to invest time at these million dollar structures which lay in the very heart of where we all live.

The elected officials passionate plea to have the parents meet with PEP in Long Island City on May 18th was repeated by all. I pointed out as the last speaker that PEP is not royalty, nor are they a body so profound that they can’t come out to Queens Village. Members of the community need to understand that PEP and the rest of the government agencies work for us. That the Board of Ed officials should come to IS 109, sit in the broken chairs and come to appreciate the decay which they are responsible for. The PEP meeting scheduled for the 18th should be postponed until such time as PEP can accommodate the parents at their local school IS 109. I reminded the parents as well as the students that the government officials – elected and otherwise are their to “Serve” the people and not the other way around. So if the meeting needed to be rescheduled, then so be it. In six weeks IS 109 will be empty as school vacations start and the entire summer can be used so that the impacted parents can have a voice in what is going on at this school. The PEP meeting on the 18th is scheduled during the work week at 6PM at night in Long Island City in an area that is difficult at best to park a car nearby. Working parents would find it nearly impossible to attend a meeting in Long Island City, Queens especially if they work in Manhattan, Brooklyn or Long Island. Once again, the government is placing the burden on its clients, its customers for whom they serve instead of the other way around.

In conclusion I spoke to the Times Ledger and Courier newspapers neither of which had an education reporter following the story. Both reporters seemed interested and I tried to remind them that IS 109 didn’t happen overnight. That children shouldn’t be dealing with Science Labs used as storage bins, that classroom doors shouldn’t be boarded up. That broken furniture and other items need to be maintained and upgraded on schedule. That this school with a history of problems in past years has come along way. That the fact that NYS Senator Comrie is talking about the lack of a capital program for 18 years speaks volumes in terms of neglect for resources for this school.

I pointed out that our schools in Eastern Queens are seeing a trend. The trend started with Martin Van Buren High School, a school I attended as a child. The prior leadership in the school was not attentive and as a result the school went downhill. The community lost confidence and the vacancy rate went up. As soon as the BOE saw an opening, in they ran taking kids from Far Rockaway and Brooklyn, put them on buses and trains and shipped them to MVB. These students are doomed to failure because of elected officials and City policy failures. Then they brought in PTECH and spent more money. I attended another meeting at PS 18, the Winchester School only to find that this school too is facing overcrowding and terrible conditions and now IS 109. Mind you, these schools were built so the local community could appreciate the schools, not the entire City of NY. The NYC Board of Education has proven it is incapable of managing our schools. This is a trend, a pattern of failure for both the community and more importantly, the children. The New York City Board of Education should be broken up and managed borough by borough and held accountable for its own budgets. The New York City Board of Education is too big and incapable of handing its affairs from a central bureaucracy. Case in point, IS 109. This is a disgrace to the community and a tremendous disservice to the children of the area. Let our voices be heard!