The Streets of New York

The Streets of New York

Today those who live in NY have ceded all authority to the elected officials.  This is wrong. Government officials are supposed to represent us and not rule over us. 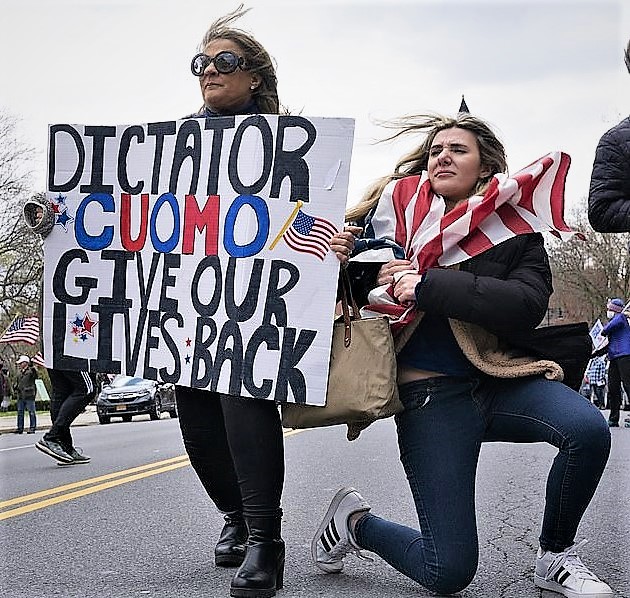 Where else but in the City of New York could you find a group of artists, second amendment advocates, free speech firebrands all have their right to assembly swept away in a heartbeat and absolutely no one is talking about it.  The Constitution of the United States of America is suspended in the City of New York, in broad daylight while oligarchs like de Blasio and Cuomo, his brother, and other big and small elected officials laugh behind closed doors.

What good is an alarm if no one is ringing the bell? Right here in Eastern Queens, not a word about how elected government officials have abused their power.  Why aren’t these city and state officials standing up and shouting that a Governor or a Mayor cannot suspend the U.S. Constitution?  It is our right to make those decisions and not have them made for us.  In good times and in bad, we as a nation have weathered many storms and this virus is not the first and not the last.  Let the government advise and let the citizens decide.  Not one newspaper, not one reporter, not one group of freedom loving people brave enough to stand up and say this is still the USA and we have a right to be heard.  It is my right to demonstrate whenever and wherever I choose.  The government does not give us this right, nor does any politician. The U.S. Constitution resolves those powers. Never forget it.  It is our right unless we cower to the very people who would have us locked up in chains in our very homes.  This is nuts!

What kind of America is this? Today those who live in NY have ceded all authority to the elected officials.  This is wrong. Government officials are supposed to represent us and not rule over us.  New Yorkers have gotten it all wrong and it is way beyond time to fight back.  New York, the land of handouts, and weak leaders, needs to move on and get this state and city back to fighting strength.  The men and women must stand up in the face of this fading pandemic and take the safeguards but get on with life.  Stop this craziness.

We live in a state where the most vulnerable living in nursing homes were fed to the lions as Governor Cuomo ordered COVID patients into those buildings.  No greater loss of life was felt in any other sector than in those very institutions.  The helpless, the frail, the weak, many left alone suffered the fate of the infection so ordered by the Governor of New York.  What do we hear about it – crickets, just crickets!

People are scared to death to wander outside their homes. What wisdom is there in creating a culture and atmosphere of fear, uncertainty, and doubt?  Yet this is exactly what New York officials have done with the help of friends in the media.  The young and old are literally afraid to leave their homes. Locked out of our public parks, storefronts closed, supermarkets barren, and small businesses folding up quicker than you can say ouch.  People are scared to death and no one owns that message more than the elected zealots in City Hall and the NYS Legislature.  Not one of them standing up for the normal average everyday New Yorker.  It is a disgrace, we have lost all reason, logic, and common sense in our “Sanctuary City”.

Voting matters and elections have consequences. I have said in many forums and during many political discussions that voting matters and elections have consequences and it has never been truer, than today.  Each of us owns a stake in New York – call it an investment.  Our shares should be a tremendous value, unless we squander every opportunity, we must change the course of history.  Our founders have warned us, they have prepared the road for us and it is upon every individual to take that step forward with flag in hand and exercise our charge.   Lest we’re ready to set the stage for a second revolution, voting is the sole solution to what ails the Empire State.

« PreviousSay NO to Governor Cuomo’s plan to reimagine our school system!
Next »Democrats like the Mensheviks will go into the Dustbin of History