Democrats like the Mensheviks will go into the Dustbin of History

Democrats like the Mensheviks will go into the Dustbin of History

All it took was a spark, the tragic police killing of George Floyd in Minneapolis, to trigger the explosion of anger and frustration that the radical left exploited to orchestrate the violent insurrection across America they had been planning for months. 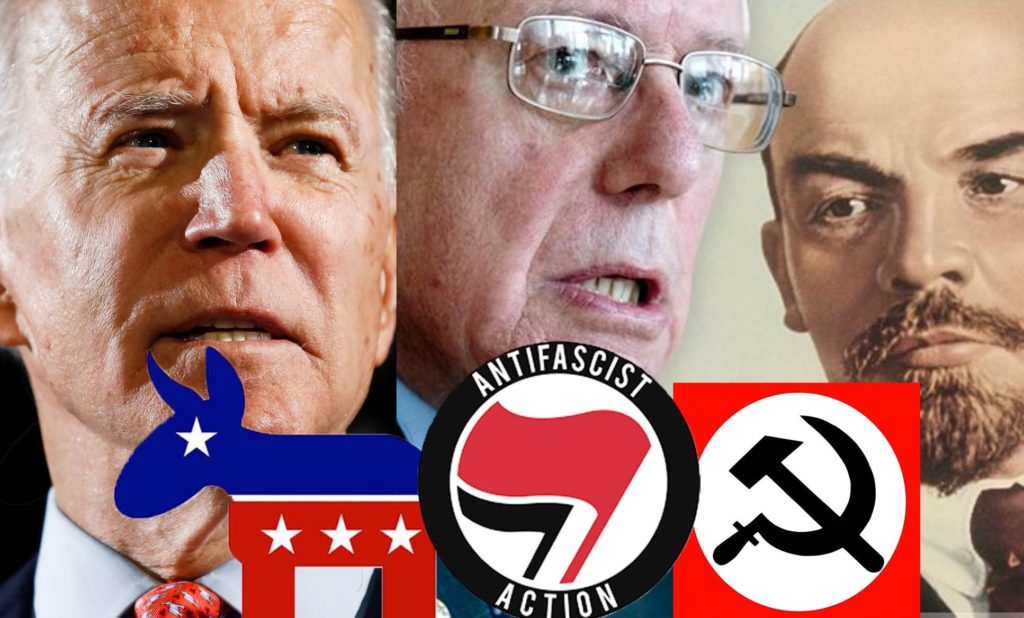 The radicals strike when then see weakness, and that is what they saw in the largely Democrat run cities where the major riots broke out. These professional agitators have a well-planned strategy for the violent takeover of America which they can never accomplish peacefully through elections.  Hours after the video of Floyd began circulating the internet, militant Antifa, Black Lives Matters cells and other radical socialist groups began deploying to Minnesota to riot, according to Andy Ngo, an American conservative journalist who studies the revolutionary tactics of the radical left. The anarchist-communist group, Antifa has perfected the art of rioting and chaos, first breaking store windows, calling in the looters, and then burning the place down. It is encouraging news that Antifa, whose stated goals are to abolish capitalism and law enforcement in America, will be designated as a terrorist organization as President Trump announced on Sunday May 31st.

Antifa and an amalgam of radical leftist movements in America including Black Lives Matter (BLM), Democratic Socialists of America (DSA), Party for Socialism and Liberation (PSL), and the Bernie Bros, have taken a page from Lenin’s playbook of the Bolshevik Revolution. They follow in the footsteps of murderous dictators such as Lenin, Castro, Mao, Pol Pot, and Maduro, who exploited the poverty, chaos and turmoil of their societies to take over through violent insurrections, since they could never achieve power through a peaceful election process.

History is repeating itself now as we are witnessing the battle of the moderates versus the radical left within the Democrat Party. Lenin’s totalitarian Bolsheviks split from the more moderate democratic Mensheviks, who were the popular establishment party, violently seized power, overthrew the Tsarist regime, and ultimately established the Soviet Union. Lenin hated the Mensheviks more than the Tsar, whom he had executed along with his entire family. Along with capitalism and democracy, Lenin annihilated the Mensheviks and sent them, as Trotsky chided “… into the dustbin of history!”

These radical socialist movements, all enthusiastic supporters of socialist Bernie Sanders during the Presidential Primaries, will not be supporting Joe Biden, as DSA and others stated. Similar to Lenin and the Mensheviks, the radical socialists hate the establishment Democrats more than the president. The political war the establishment Democrat-media complex waged against the Sanders presidential campaign and the system rigged against him to defeat him the second time, pushed them over the boiling point to set off “the powder keg that is growing all over this country,” in the words of Nina Turner, former top aide for Sander’s presidential campaign, inciting the flames of riot and revolt across the nation. 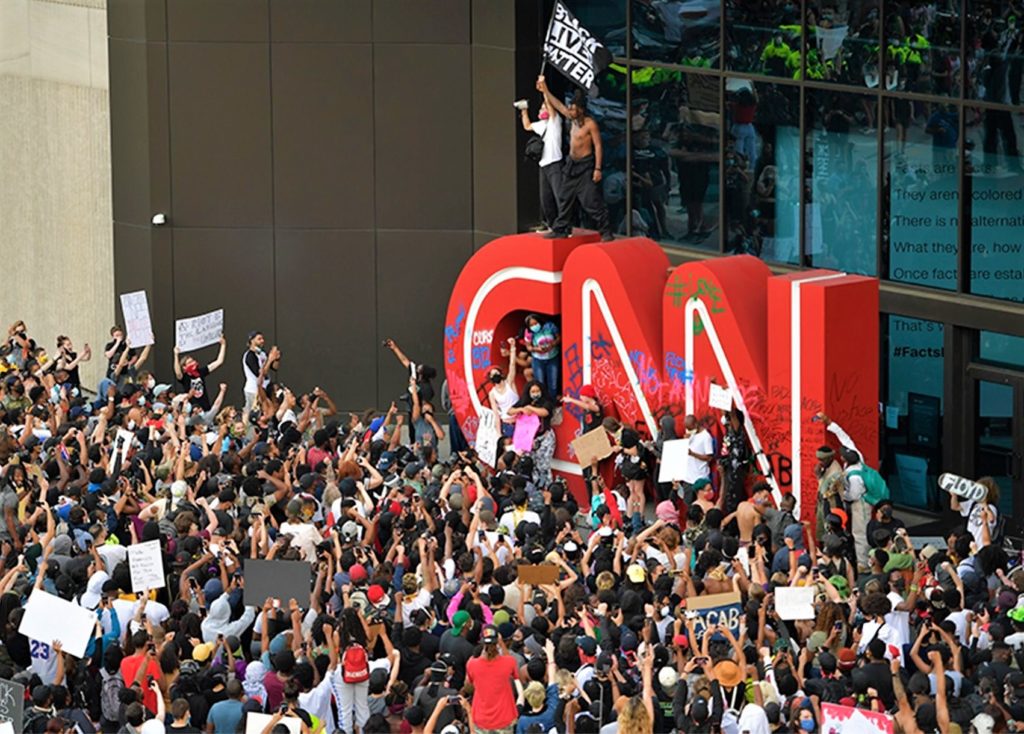 It’s ironic that the rioters attacked CNN Headquarters in Atlanta, since CNN promoted the righteousness of the riots. But CNN, the media arm of the Democrat establishment, played a major role in the defeat of Sanders. After his Nevada victory, Sanders was poised to sweep the nation and win the Democratic nomination.  Biden was dead in the water. This frightened the Democrat-media establishment, and CNN conspired with them to undermine the Sanders campaign, blasting his age, his health after a heart attack, his way too expensive Medicare and tuition reforms, his far leftist leanings, and alleging “sexism” at the CNN debate. It was a full court press to defeat Sanders as Super Tuesday was approaching. So former rivals united around Biden who all exited the race giving their endorsement, as the fear and trembling of a Sanders victory took hold. The leftists vowed that if the nomination was stolen, wait for the riots to start.

Most of the rioting is happening now in Democratic strongholds, as payback for their offences against the left. Chicago, Detroit, Baltimore, Minneapolis, St Louis, Washington DC, Cleveland, some of the most dangerous cites in America, now hotbeds of rioting and unrest have been totally controlled by the Democrat Party for 50 years or more. The radical socialists doing the looting, burning, and causing chaos, do not care about the poverty, unemployment, the failing schools, the crumbling infrastructure, over-regulated businesses, or the black, the poor or minority populations living there. Their aim is to create chaos and take over when the people are sufficiently cowed and afraid. Democrat mayors and governors are giving them carte blanche to create havoc and destroy property and human life, as did leftwing Minneapolis Mayor Jacob Frey who surrendered the Third Police Precinct to the rioters. On top of that, the son of Minnesota AG Keith Ellison, and City Council member, officially declared his support for Antifa. Voters throughout America need to rise up and kick out these soft-on-crime political has-beens.

Democratic governors and mayors have been weak and spineless as the riots have consumed their cities and the people were left terrified and hopeless. The riot at the Barclays Center in Brooklyn was a well-organized attack orchestrated by radical socialist groups throwing bottles, bricks, Molotov cocktails and other debris at police. Police were injured, some almost killed, but that didn’t prevent Governor Cuomo, Mayor de Blasio as well as other elected officials from taking the side of the rioters and calling for an investigation into police responses, and Senator Gounares (D-Brooklyn) blaming the police when they were trying to defend themselves. Senator Michael Gianaris (D-Astoria) and many other New York City Democrat elected officials, said they will no longer accept campaign contributions from police unions and declared, “we deserve a police force that is held accountable for racist behavior.” Setting the stage for lawlessness and mayhem, New York City with its bail reform laws releasing criminals to the streets and emptying city jails, welcomes the professional agitators expediting their plunder.

In contrast, the mayors and governors of Republican cities and Trump strongholds, who refuse to placate the rioters, who are not afraid to stand up to the criminals and thugs looting and rioting in the streets of their cities, have set curfews and declared state of emergency orders early on and rioting has been curtailed. While Democrats have failed to protect American lives or property, Republicans have protected this country from foreign adversaries and domestic foes since 1861, when Abraham Lincoln, the first Republican president emancipated the slaves and won the Civil War. In 1864 he defeated the Democratic nominee, former General George McClellan who wanted to make peace with the South and discard the victory that Lincoln and the Union was about to achieve. Teddy Roosevelt saved this country with “big stick” diplomacy, built up our military, and made America a superpower. Eisenhower defeated the Nazis and stood up to the Soviet Union. Ronald Reagan defeated communism and the Soviet Union and won the Cold War.

The Republican Party is historically the Party of law and order and strong defense. They have always championed the protection of the people and always will.  In 1968, the chaos and storming of the Democrat National Convention and the riots that shook the nation, paved the way for the victory of Richard Nixon who ran for president on a law and order platform. History is now repeating itself. On Monday June 1st, President Trump called himself “the president of law and order” and promised to restore security and safety and mobilize the United States military to American cities to stop the rioting and looting and protect the rights of Americans. When chaos happens, people seek law and order, and will vote for Republicans. Rudy Giuliani recently said: “Don’t elect progressive Democrats if you want to be safe.” Just like the Mensheviks, the Democrat Party is headed for the dustbin of history.

Phil Orenstein is the president of the Queens Village Republican Club. Established in 1875, it is America’s oldest Republican Club. www.QVGOP.org. Historian, Jerry Matacotta was the advisor for this article.