Ed Mullins, President of the NYC Sergeants Benevolent Association spoke out as a result of the recent NYS Supreme Court ruling. Here’s what he had to say: 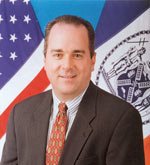 On Wednesday June 18, 2014 State Supreme Court Judge ruled members of the NYPD who engage in Stop, Question and Frisk can now be sued in accordance with the provisions of Local Law 71 as passed by City Council. Once again I remind each of you, this law impacts your career, family and overall well-being. As you go to work each day, your only assignment is to return home to your family. The POLITICIANS and the PEOPLE of this city are NOT SUPPORTING you, make no mistake about it! Shootings are on the rise and gun arrests are down. DO NOT jeopardize your safety, careers and pensions! We are currently exploring an appeal.

Public Policy debate isn’t just for those looking to run for office or those hiding from the harsh realities of living in some of the poorest sections of our city. The public debate belongs on the outside decks, stoops and summer barbecues, as well as parades, Deli’s, shopping centers, camps, bar stools and bus lines. This past election cycle we observed what happens when 76% of the voters stay home. Public Safety has been put back on the front page of every newspaper in the nation. The impact of public policy in NYC is far reaching to every corner of our nation. Mark Weprin deserves credit when he is right and is called out to own harshness of the results of his actions when he is dead wrong. This is no little deal – people’s lives are at stake.

Pick up a newspaper, read about the stinging ring of shots fired into a hospital room injuring a patient. Read about how shooting incidents are up some 1800% in Brooklyn North’s 75th Police Precinct and ask yourself this….how far away is East New York from Bellerose? Shootings city wide are up 13% and GLA’s (grand Larceny auto) are creeping up in every corner of our great city after years of declines. The foil here is Mr Weprin insistence that the law needed to be changed and in so doing put individual police officers in the crosshairs of every single nutcase or gang member who would chose to sue him/her. That no longer would the city of New York shield police officers from acting within the course of their duty. Mark Weprin tore down that wall of protection for NYC Police Officers and made them civilly liable for every action they take during their tour of duty (not just Stop, Question and Frisk). This point which Mr Weprin then disputed was put to rest yesterday as NYS Supreme Court Judge Singh upheld the law as constitutional and singled out the fact that now police officers could be individually sued. So no surprise that the head of the largest supervisory police union in the nation would tell its members to pull back, protect yourself, your careers, your families, “the People of this City do not support you”.

Mark Weprin may not be enjoying the sharpness of my persistent and deeply penetrating criticism concerning local law 71, The Community Safety Act, but he certainly owns the results. The blood of the poor child in a Brooklyn public housing development whose only desire was to get an ice cream cone and gets stabbed to death in an elevator is a direct result of bad law, bad public policy advocated by none other than YOUR City Councilman Mark Weprin. Mr Weprin owns it, why? Mr Weprin told every police officer in NYC that he would vote against the bill, then later last summer did a 360 degree turn and voted for it – lying to a police officer is not just extremely poor judgement to get a political endorsement its down right dangerous for the people of this city. When it comes to lying our elected officials in NYS of either party seem to have no limit. Mark Weprin is now tarred a liar and not to be trusted. Ask any Police leader in NYC and please ask the head of the greatest Detectives in the world at the DEA. Weprin is a liar.

Police officers are dearly concerned with saving lives, upholding the law providing a blanket of security so that we can all live work and play with the assurance that we will be safe. It is up to the City Council and Administration to ensure that the administration of justice is managed correctly. That’s a management issue, not a legal one. Stop, Question and Frisk is legal and apart of the NYS Criminal Procedure Law. Mr Weprin, still doesn’t get it. Its a management issue and his job as a City Councilman is to call out NYPD and report to the public when things go afoul, not to change public policy so drastically as to endanger the public.

The tide is predictably turning six months into a new administration we see nothing but crime, fear and disorder returning to the streets of NY and violence escalating. Today, police officers on patrol do so in fear that you in the Creedmoor Civic are looking to sue them personally. The fear is with the cops, the fear no longer rests with the criminals. The City Council is now pleading for an additional 1,000 police officers to be added to the streets. Why? Because they too are picking up on the fear residing in the streets of NY. Who bears the costs of poor public policy? You the taxpayer and to what avail or sense does it make to add police officers to the payroll when you hire them with their hands handcuffed?Maybe, I’ll see you at the next Creedmoor Civic, Bayside Hills Civic Association meeting or Bowne Park Civic Assn or Bellerose meeting, homeowners, PTA meeting. But I will be keeping a watchful eye over our community.

Until then, be safe and enjoy your summer.
Joseph R. Concannon

« PreviousVideo: The Growing VA Scandal and its Implications
Next »Stop the Elmhurst Homeless Shelter Now!