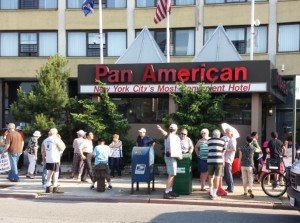 Queens was always the quiet, unnoticed and unheralded borough of New York City throughout most of its history. Its residents characteristically have been hard working citizens, who paid their taxes, obeyed the law, and sent their children to the best schools in order to do better than their parents.

However in recent weeks we awoke to find our beloved communities beginning to be transformed by a newly elected city administration which has violated its own laws and regulations.

The communities of both Elmhurst and Glendale are the first but not the last, to be affected. The Elmhurst community found out through the media that the Pan American Hotel has been converted into an illegal homeless shelter without community notification, open hearings, proper facilities and without even properly informing the local public officials. Glendale has suffered a similar fate. 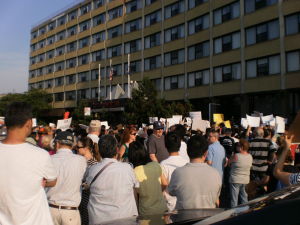 The sleeping giant, Queens County has awakened. The recent spontaneous protest of over 1000 residents in front of the hotel included a preponderance of the normally reserved Chinese community, although the protesters represented a cross-section of the borough’s inhabitants. The attendance at the rally represented the best of Queens – over 100 different cultures, languages and every age group – a true melting pot.

Your community is next. We must stop it now.

The mission of the Queens Village Republican Club is to continue to advance the basic Republican principles of maximum personal freedom and limited government. Doing that from the environment of a Club that traces its ancestry to almost the beginning of the national Republican Party itself gives us not only great pride but also an awesome sense of connectedness to the great leaders of the past raised up from our beloved Queens Village community who similarly fought to preserve the same ideals that we cherish today.