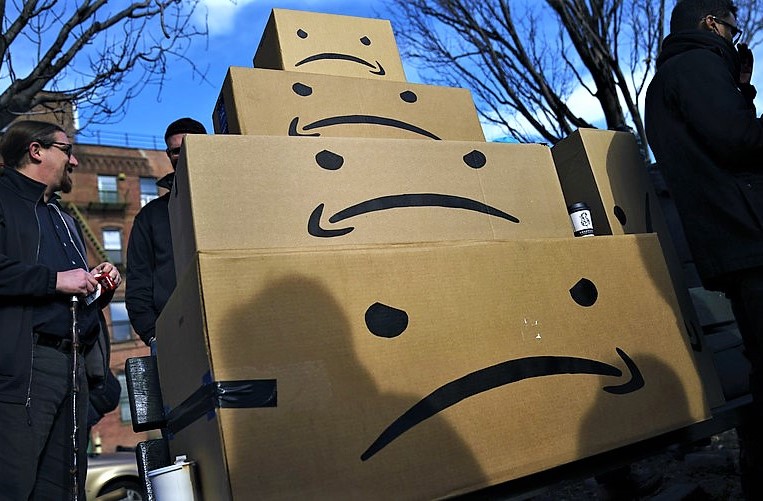 The Amazon HQ2 sweepstakes is over and the winner is Queens, New York. And some place in Virginia called National Landing. And Nashville, Tennessee.

But that future is about to get a massive stress test.

Deals like HQ2 are a magnet for corruption. Amazon claims the new Long Island City site will create 25,000 jobs with an average wage of more than $150,000 per year. Ditto Virginia. In exchange for this fairy tale, New York Governor Andrew Cuomo and Mayor Bill de Blasio ponied up more than $1.5 billion in tax breaks and grants to be overseen by Albany’s famously corrupt political culture. The state will seize control of the land. Amazon’s construction costs will be reimbursed. Jeff Bezos gets federal tax breaks for “distressed” property, a helipad, and a partridge in a pear tree. Instead of property taxes paid to the city, Amazon says it will contribute to an “Infrastructure Fund” for local improvements “developed through input from residents during the planning process.”  Watch for Amazon-aligned groups to magically appear to game this process. Watch for Albany-aligned special interests to start putting their hands in the pie.

As for oversight, forget about it. The governor and mayor agreed on a plan to cut out the New York City Council, which is specifically tasked to examine large land-use projects. City Council Speaker Corey Johnson is apoplectic, excoriating the deal as “extremely troubling” and “done behind closed doors, with zero community input.” Freedom of information requests about the project have been stonewalled and denied.

Now, there’s no doubt that HQ2 offers lots of good jobs — though I’ll believe 25,000 for New York at $150k when I see it — but it’s also true that Queens is about to get a lesson in Schumpeter’s law of creative destruction. The gale force wind of capitalism, Schumpeter wrote, “incessantly revolutionizes the economic structure from within, incessantly destroying the old one, incessantly creating the new one.” The Internet, digitalization, and smart phones are all part of the wave of job-creating creative destruction reshaping the world economy. Amazon is part of it. So is Google, which just announced its own New York deal.

It’s best to be on board for that ride. But the toll will be steep. Amazon continues to decimate retailers in New York and around the country. Johnson and other community leaders have raised concerns about the impact of HQ2 on local streets, sewers, subways, and schools. Housing prices took off on news of the deal — a harbinger of things to come, threatening to drive longtime residents from the area.

“I seen my opportunities and I took  ’em,” the corrupt Tammany Hall politician George Washington Plunkett declared in 1905. Plunkitt was a practitioner of what he called “honest graft” — essentially, gaming the system to benefit the powerful and well-connected. Times have changed, but they haven’t changed that much: honest graft — better known these days as crony capitalism — is still with us, as well as outright crime. HQ2 presents a wealth of opportunities for New York and Virginia, but there is little accountability, transparency, and oversight built into the deals. That’s a sign of trouble ahead.

« PreviousPresident’s Message: America is Worth Fighting For
Next »Lincoln Dinner 2019: Celebrating the Greatness of America