“Mort Pomerantz was a gift from God, to me personally, and to the veterans he served, and to all who knew him.” 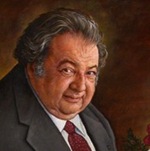 A prominent New York rabbi who was a strong advocate of conservative and veterans causes and a longtime friend of the late Cardinal John O’Connor has passed away.

Rabbi Dr. Morton H. Pomerantz died May 2 at Winthrop Hospital in Mineola, New York, at age 76 after a short illness.

Pomerantz, a Douglaston, New York, resident had retired recently as chaplain for the state of New York, working with disabled children and adults at Melville’s Long Island Developmental Center.

For several decades, Pomerantz had been a fixture in New York City and suburban Nassau County, supporting Republican causes and several veterans groups he belonged to.

The son of Dr. Max Pomerantz, the former city surgeon of Cleveland, Ohio, and Gertrude Pomerantz, he attended Hebrew Union College in Cincinnati, where he was ordained a rabbi.

He was a member and assistant rabbi at Cleveland’s Temple Tifereth Israel, led by the late Rabbi Abba Silver. Silver had become the nation’s most influential Jewish leader and served as a spiritual mentor for young Pomerantz.

In 1964, during the beginning of the Vietnam conflict, Pomerantz joined the Navy and served as a Marine Corps and Navy chaplain with the rank of lieutenant. He served during this time with the late Cardinal John O’Connor, then a Navy chaplain, and the pair became lifelong friends.

After the Navy, Pomerantz served at several congregations in New York state.

He also was active in numerous veterans organizations, including the Jewish War Veterans, where he served as national chaplain.

He was also an active member of the Vietnam Veterans of America and the Navy League. The Hebrew Union College-Jewish Institute of Religion awarded him an honorary doctorate upon the 25th anniversary of his ordination as a rabbi for his long public service.

Pomerantz chaired “Democrats for LeBoutillier” and played a key role in LeBoutillier’s surprising victory that year.

After the election of Ronald Reagan that year, disenchanted by the Democratic Party’s tilt of the left and President Jimmy Carter’s ambivalent support of Israel, Pomerantz decided to join the Republican Party.

“Mort Pomerantz was a gift from God, to me personally, and to the veterans he served, and to all who knew him,” LeBoutillier told Newsmax.

“From the day he walked into my Queens campaign headquarters in 1980, he became a political soulmate and a lifelong friend. He was wise and funny and politically astute. But most of all, he saw what was wrong in our society and wanted to help fix it.”

Former Queens Republican state Sen. Frank Padavan, a friend of Pomerantz’s, described him as “a beautiful human being, dedicated to his country which he served with distinction.”

Pomerantz, a member of the Reform movement of Judaism, was an unusual advocate for pro-life and pro-family causes, and joined with New York’s Cardinal O’Connor in undertakings to support their shared beliefs.

Catholic League President Bill Donohue issued a statement upon the rabbi’s death, saying, “Rabbi Pomerantz worked very closely with Monsignor John Woolsey and the late Jack Swan in interreligious affairs. He was a great friend of traditional moral values, and of the Catholic church.”

“It is fascinating that most of the friends of this Jewish rabbi were Gentile, and yet despite differences in background, they all exhibited mutuality of love and caring,” said his friend and personal attorney, Robert M. Unger of Great Neck, New York. “Mort had a considerable level of erudition and a sound intellect. His expertise ranged from Torah to opera to political issues. He could speak with authority on these matters.”

Friends also spoke of his great sense of humor. Phil Plascencia, former treasurer of the Depository Trust Company, recalled the rabbi being questioned by a paramedic after a health episode. To test the rabbi’s mental acuity, the paramedic asked him, “Who is the president of the United States?”

Christopher Ruddy, CEO of Newsmax Media, Inc. said he considered the rabbi “among my closest friends.”

“I don’t think I ever met a man with more integrity, a man who loved his country more,” Ruddy said. “He was truly a universal person – a scholar, a military officer, a musician, and, most importantly, a man of faith.”

Unger recalled a conversation he had with Pomerantz shortly before he died.

“He remarked to me, ‘Isn’t it amazing what true friends I have.’ He was referring to all the people who pitched in to take care of him in every aspect of his life. Very few have that level of blessing when they meet their maker,” Unger said.

The rabbi is survived by his brother Barry Pomerantz of Newton, Massachusetts, and his nephews Noah and Daniel; his cousin Barton Brier of New York and Betty Nichol of Columbus, Ohio.