Oldest Republican Club in the Nation to Honor Pamela Geller 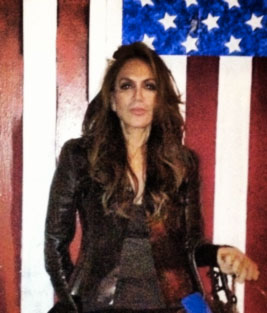 QUEENS VILLAGE, January 21, 2013: The Queens Village Republican Club, will be honoring Pamela Geller as the “American Patriot of the Year” at its 138th Anniversary Lincoln Dinner on February 10th. Ms. Geller is an author, investigative journalist, activist, captivating speaker and founder, editor and publisher of Atlas Shruggs.com a breaking news blog, and executive director of American Freedom Defense Initiative (ADFI) and Stop Islamization of America (SIOA). She is perhaps best known for spearheading the protest against the Ground Zero mosque, organizing several mass rallies to halt the construction of Park51, the Islamic Cultural Center near Ground Zero, which according to Geller, the majority of Americans, 70%, find deeply insulting.

She has been hailed as a “dynamo of energy and a paragon of courage and fearlessness” (Robert Spencer, author) and “one of the nation’s most vigorous opponents of bigoted violence” (John Hinderaker, Powerline).  She has been the subject of a profile on 60 Minutes, and of a cover story in the Sunday New York Times. A frequent guest on talk radio, she has appeared on numerous radio and TV shows and her articles and op-eds have been published in publications throughout the country.

The GOP Club’s annual dinner will be held on February 10, at the famous Antun’s of Queens Village, where almost every New York State governor, mayor, and president of the United States has been present since the 1950s. A lavish cocktail hour with an abundance of food and open bar starts at 3 PM, and the sit-down dinner starts at 4 PM along with the award ceremonies and keynote address, and goes to 8 PM with a Viennese Table of delectable and exotic deserts accompanied by patriotic music and dancing at the end.

Every year the historic Club, which was founded in 1875, when Queens was mostly farmland, honors unique and outstanding individuals who have made significant contributions to the community. Pamela Geller’s award for patriotism is due to her courageous and unwavering stance as a major proponent of free speech. Whether we agree or disagree with her ideas and opinions, true patriotism is having the guts to speak out and champion our First Amendment rights without surrendering to intimidation, threats, and violent acts. Ideas can change the course of history and the Freedom of Speech protects all ideas, whether we like them or not, and if this freedom was lost, someone else will dictate what’s right and what’s forbidden for us.

Geller claims that America’s free press, the bulwark against tyranny, has been compromised and people have been silenced by the threat of Islamic terrorism. With over 20,000 deadly terrorist attacks since 9-11, this, she asserts is the gravest threat that civilization faces. Geller has simply been calling attention to the perpetrators of these terrorist attacks, church bombings, honor killings, bus bombings, and the ideology that inspires them. For this, she, rather than the perpetrators of these acts, has been the focus of outrage from many media outlets.

However, Ms. Geller has courageously stood her ground and continued to tell the truth. Truth, she says “is the new hate speech “and it’s even come to the point where “telling the truth is a radical act.” Exercising her fundamental rights, she has recently been in the news for a massive campaign of subway ads calling for support of civilization against the savagery of jihad: “In any war between the civilized man and the savage, support the civilized man. Support Israel. Defeat Jihad” The MTA rejected her ads, while she noticed many negative anti-Israel ads were accepted. She sued the MTA and won in court with the judge ruling that the MTA violated her First Amendment rights.

We agree with Michael Coren, Sun TV host who said “I honestly think that one day historians will write about the defense of Western values and virtues in the 21st Century and speak of heroes. And one will be Pamela Geller.” Another hero, Lt. Col. Allen West, former congressman from South Florida, was honored at a past Lincoln Dinner and delivered a fiery keynote speech. He said that it is the duty of the Queens Village Republican Club, the oldest continuously active Republican Club in America, to carry the torch for the Republican Party and its core principles for the whole nation. That’s a tall order, but one that the Club takes seriously and carries out proudly. For her heroic defense of freedom of speech and Western values, the Queens Village Republican Club is proud to present Pamela Geller with the American Patriot of the Year award.

There are 5 comments. Add yours.