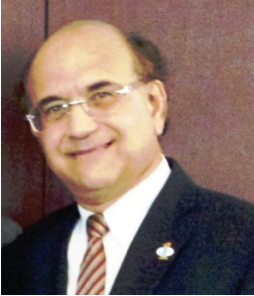 Raj Mehta, Chairman and CEO of Infosys International Inc., will be honored at the Queens Village Republican Club’s Lincoln Dinner on February 10th at Antun’s. Mr. Mehta will receive the “Businessman of the Year” award for his great success in achieving the American Dream, beyond all expectations, from his humble roots as an Asian American immigrant. The award will be presented by Club board member, Hemant Shah from Laffey Fine Homes, Inc., and former Lincoln Dinner honoree.

Mr. Mehta came to our shores from India with only six dollars in his pocket, seeking the vast opportunities that the land of liberty and freedom of enterprise provides. His career spanned more than 30 years in the information technology industry. In 1986, he founded Infosys International Inc., headquartered in Plainview, NY, which has become one of the leading information technology companies on Long Island and was listed in INC 500, as one of the fastest growing companies in the United States.

Mr. Mehta has been recognized throughout his career for his business leadership, his commitment to the community, and his support and mentoring of not-for-profit organizations in order to create economic and social opportunities for others. Some of the numerous honors and awards he has received include “Top 10 Asian/American Business” Award in New York at the New York Times Conference Center, “The 50 or so Around 50 Award” from Long Island Business News, Network Magazine’s 2008 David Award, “Fifty Influential Entrepreneurs in Business Award” by the Minority Enterprise Executive Council in Washington DC., the “Minority/Women Owned Business Enterprise Trail Blazer Award” from Nassau County Office of Minority Affairs, and many others.

Mr. Mehta is also producer and host of a talk show called “Interviews That Matter with Raj Mehta” which airs on ITV/ITVGOLD on Saturdays at 8:30 a.m. He interviews policy makers, business leaders, dignitaries, and elected officials including NYS Senate Majority Leader Dean Skelos, Nassau County Executive Ed Mangano, and Nassau County Comptroller George Maragos, who in fact started his political career as a member of the Queens Village Republican Club.

Raj Mehta is being honored as a shining example of the American Dream which any citizen can achieve if they are willing to take a chance, follow their dreams, and work hard to realize their goals, as he eloquently stated in his acceptance speech for the Trail Blazer Award: “No matter what the color of your skin is, no matter what language you speak or no matter how different your name is, nothing can stop you achieving your goal, if you have the determination and the desire coming from your heart”

« PreviousOldest Republican Club in the Nation to Honor Pamela Geller
Next »The 138th Anniversary Lincoln Dinner, a spectacular success!