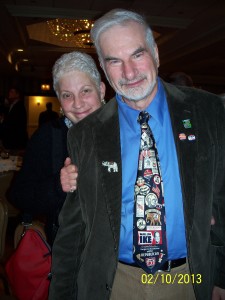 It was a sold-out crowd for the 138th Anniversary Lincoln Dinner that was a spectacular success and an unforgettable experience for all of the nearly 200 attendees. The event was a unique combination of inspiring speakers, patriotic friends from all nationalities and backgrounds and Antun’s world famous cuisine and catering. The most significant upshot was the inspiration to be optimistic about the future of America and the motivation to take action on our founding principles.

Raj Mehta the Businessman of the Year honoree inspired the attendees with his personal story of success and a message of freedom and unlimited opportunity in America if one is determined to achieve his dreams. Professor Gerald Matacotta delivered the Lincoln address admonishing the GOP to focus on education to combat the “four monsters” of multiculturalism, social justice, anti-Americanism and moral relativism in our school system. 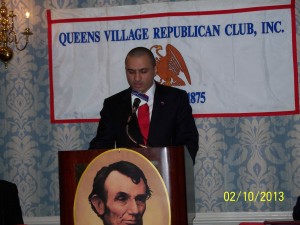 The Educator of the Year honoree, Principal Khurshid Abdul-Mutakabbir spoke about the promising new classical education curriculum his instituted at Maspeth High School.

The entire crowd was on their feet when the Ultimate Sacrifice Award was presented to the family of Marine Lance Corporal Greg Buckley Jr. who gave his life for his country in Afghanistan. When the father, Greg Buckley Sr. spoke tearfully and emotionally about his son’s “green on blue” murder at the hands of the Afghanistan police he was training and demanded justice for his son, there was not a dry eye in the room.  Pamela Geller’s honors as the Patriot of the Year for the courage to stand up for her 1st Amendment rights, and her take-no-prisoners speech excoriating the liberal left and the “enemedia” for discarding the truth in their cowardly submission to the perpetrators of global jihad, was interspersed with cheering and standing ovations.

Feedback from the guests tells the story that “the entire production came across as a class act” and it was a “great program Sunday evening.  A job well done!” and “the speakers were really great and the Marine’s father was unbelievable. What a story” and “I will do all I can to help you spread the word about what happened to your hero Marine son.”

For more info and photos of the event, see the article in the Times Ledger online.

« PreviousRaj Mehta, Leading IT Entrepreneur Honored at GOP Gala
Next »Michael Cutler on nexus between immigration and national security