Some say the glass is half full, some say half empty. I choose the positive. I say it’s half full, we are on track to winning elections, and our actions, words and prayers to elect strong Republicans, are making a difference!

Republicans are a minority group in New York City.  Outgunned, outnumbered, and hunkered down in our foxholes, we Republicans forgot what winning is all about. We are engaged in a battle for the soul of America, and winning the battle of ideas means winning elections.

This battle of ideas, which in our history took the form of the slave system versus a free market society, began when the founders of the Republican Party met in 1856, in Philadelphia. They met where the U.S. Constitution was written, in order to restore it, return to its foundational principles, and to abolish the deep-rooted slavery system of the South, championed by the Democrats, which was spreading North and to new territories in the West.

They resolved to save “the last best hope of earth” in the words of Lincoln, our first Republican President. A bloody Civil War ensued, and Lincoln and the North ultimately triumphed, abolishing slavery, saving the Union, and ushering in “a new birth of freedom.” But the battle of ideas continues relentlessly.

The battle reached a crescendo eight years ago, when over one million Americans flooded the US Capitol for the “Million Taxpayer March on Washington.” One million patriotic Americans, dismissed by the fake news media as corporate-funded rightwing extremists, vowed to return our country to our constitutional roots and exceptionalism, and stop the dangerous plunge into socialism. They came united in one voice against the government takeover of healthcare, bank bailouts, energy taxes, trillion-dollar spending bills, and the rest of Obama’s socialist policies. 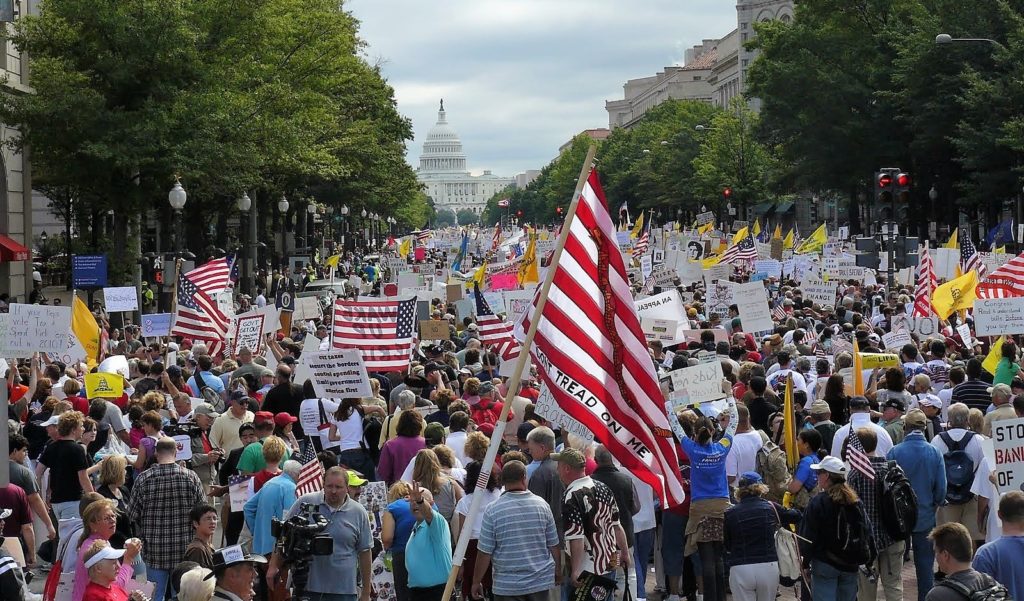 At rallies, townhalls and street protests, the wrath of everyday citizens, who love America, was expressed publicly against inept politicians. A middle-age mother who spoke out at a townhall meeting held by then Senator Arlen Spector, articulated the nationwide outrage: “I don’t believe this is just about health care. It’s not about TARP. It’s not about left and right. This is about the systematic dismantling of this country. I’m only 35 years-old. I’ve never been interested in politics. You have awakened the sleeping giant.”

The sleeping giant, or “Silent Majority” was silent no more. A new grassroots political movement was born with the watchword, “all politics is local,” as millions of Americans, turned their frustration and anger into effective political action.  Republicans started winning elections like wildfire. A great Republican tidal wave swept across America taking back our country.

The first major victory was in the 2010 Midterm Elections, when more than 60 new Republican Members of Congress were elected, becoming the majority in the House. That was the year that Bob Turner, our present Queens GOP Chairman, won the congressional election in a central Brooklyn and Queens district. Many voters of all parties, including Democrats, voted Republican for the very first time. Democrats nationwide suffered their greatest loss, and Republicans rejoiced in our greatest gain, since the Great Depression.

The Republican wave continued as our victories reached historic levels giving Republicans full control of Congress in the 2014 midterm elections.  After the 2016 elections, our Party gained over 1000 seats including House and Senate seats, state legislative seats, governorships and the presidency!

The wave continues as we turn our focus to the citywide and City Council elections coming up on November 7th, and the battle of ideas intensifies as the national debate over “symbols of hate,” comes home to New York City. The city’s statues and monuments are being threatened with elimination, including the iconic Christopher Columbus statue at Columbus Circle, since Mayor de Blasio formed an advisory commission to “address monuments seen as oppressive.” Now a throng of vandals has appeared defacing our monuments, including the destruction of the statue of Francis Scott Key, who wrote our beloved National Anthem.

History Professor Gerald Matacotta will speak at our Columbus Day Dinner on October 5th to fight back and score a victory in our battle of ideas. His talk entitled, “The legacy and history of Columbus in the United States,” will address how Columbus is important as a symbol in American history. The anti-American history faction is not just trying to tear down our statues, but they want to obliterate all institutions and symbols they deem offensive.

We hope to see you at our upcoming Columbus Day Dinner to celebrate Columbus Day, to fight for our American values, and all that we cherish in the greatest nation in the history of the world. We welcome you to join our club and get involved in our campaigns to win the battle of ideas, and win on Election Day. Get involved, volunteer, and make a difference. Most of all, come out and vote on November 7th and spread the word to all your friends and neighbors!

« PreviousCITY COUNCIL: EVEN THOUGH I’VE LOST FRIENDS HERE’S WHY I’M RUNNING AS BLACK REPUBLICAN
Next »Vote NO on the ConCon Con!