Carrying the Torch for the Republican Party!

Carrying the Torch for the Republican Party! 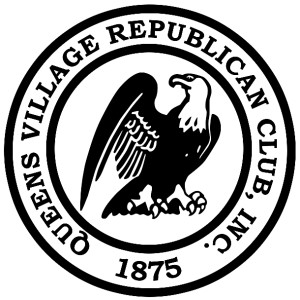 For the past year, the Queens Village Republican Club has been leading the charge, on the forefront of the New York City and State political landscape. We’ve not only been in the news, but making the news. One year ago we stood on the steps of Queens Borough Hall in a freezing snow storm and declared our indignation against the outrageous remarks of Governor Cuomo, when he said conservative Republicans should leave New York. A few months later we were back at Borough Hall challenging the “Status Cuomo” and we haven’t stopped challenging it to this day, even as Cuomo recently commiserated, surrendering to the corruption of politics in New York, saying: “You’ve always had and you probably always will have some level of corruption.”

This has been the greatest year for our Club in our overall trajectory toward Republican victories in future elections. We’ve been genuinely involved in the political, policy and civic issues of our community, our city and state. When our local community was in danger of possibly losing the largest Memorial Day Parade in America, we were there at the American Legion Post #103 planning and organizing together with the United War Veterans Council in order to revive the annual tradition of the Little Neck Douglaston Memorial Day Parade to honor our soldiers who have paid the ultimate price of freedom. On Memorial Day we marched in the grand parade with dozens from our Club. We’ve been intimately involved with the Homeless Shelter issue, the scandals at our VA Hospitals, saving the Specialized High School Admissions Test, rallies supporting our Law Enforcement community, and Homeland Security issues as reflected in the theme of our March Club Meeting: “Could New York City be the Next Paris?”

We’ve been reaching out to the many immigrant communities in Queens and discovering the truth of the words of Senator Frank Padavan when he said to them, “You’re Republicans; you just don’t know it yet!” We have been the organizers of grassroots campaigns to support our outstanding Republican candidates in the state and national races for governor, comptroller, attorney general and congress. We collected over 1000 signatures on the Stop Common Core ballot line. We organized teams of volunteers for a massive ground and phone-banking operation reaching out to thousands of Eastern Queens Republicans to get out and vote!

The crown jewel of all our accomplishments is an annual gala event, which this year we call our 140th Anniversary Lincoln Dinner. We’ve been living the words of Col. Allen West, former Congressman from South Florida, who as our keynote speaker at a past Lincoln Dinner gave us the vision for our Club: “As the oldest GOP Club in America, it is your duty to carry the torch for the Republican Party and its core principles for the whole nation.”

Our Lincoln Dinners have become known as the most lavish Republican political event of the year. On Sunday, March 22, come and enjoy the GOP’s most exciting dinner party with a full cocktail hour, open bar all evening, sumptuous sit-down dinner, music, dancing and grand finale Viennese table of delectable deserts accompanied by patriotic music and indoor fireworks. The event is held at the famous Antun’s of Queens Village, where almost every New York Governor, New York City Mayor, and President of the United States has been in attendance since the 1950s. Last year over 200 guests attended the Lincoln Dinner with Congressman Peter King. This year we expect to surpass it with hundreds more enjoying the encouraging words of our keynote speaker, Bill Kristol, the editor of the Weekly Standard, our Master of Ceremonies, Steve Malzberg, the great national conservative radio and Newsmax TV personality, Staten Island District Attorney, Daniel Donovan who is running for Congress in the 11th CD Special Election, and Republican elected officials from all throughout the state and some big surprise speakers.

We are expecting a very large crowd and tickets and journal ads are selling fast. Get your reservations in without delay because seating needs to be arranged in advance with the caterer. Seats are $100 per person or $1000 for a table of 10. This is a bargain by today’s dinner-dance standards. Take an ad in our Lincoln Dinner journal, a beautiful memento of the historic event, to show your support for the club and the principles of the Republican Party. Some of the big ad spots have been taken, but some prime advertizing space is still left. You are also welcome to support the Lincoln Dinner by donating a gift certificate or prize for our raffle baskets. All the details are on the enclosed flyer. You may also make your reservations online at www.QVGOP.org.

As America’s oldest continuously active Republican Club, we believe in and have been living the principles of the Republican Party since the days of Lincoln. Come and celebrate the Party of our great Presidents Lincoln and Reagan, and our awesome future victories here in New York, at the Lincoln Dinner. As President Ronald Reagan said: “America’s best days are yet to come. Our proudest moments are yet to be. Our most glorious achievements are just ahead.”