Corruption and Wasted Taxpayer Money
is the Norm in Albany

As published in the Readers Write column of the Bayside Times, Aug. 17-23. 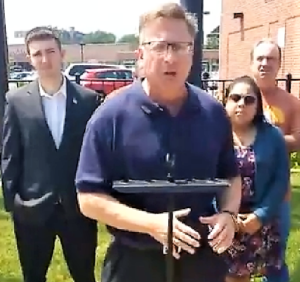 Press Conference on the
sentencing of Sheldon Silver

As Sheldon Silver, the former NYS Assembly Speaker was sentenced to 7 years for kickbacks, I was appalled by the state that the Albany legislative body is in today. All the corruption and wasted taxpayer dollars seems not to anger the incumbent elected officials. I know there are some that are upset, but not enough politicians are speaking out on the rampant corruption that Albany is faced with.

My opponent, Ed Braunstein did not issue any statement in the sentencing of disgraced Speaker Sheldon Silver. This is upsetting to me and the constituents in our District. I never hear Assemblyman Braunstein ever speak out on corruption or wasted taxpayer dollars.

Since Governor Cuomo took office in 2010, he has doled out more than $10 billion in public funding and tax breaks for economic development. He promised job creation and economic growth, neither of which came to fruition. Some projects have bankrolled graft and corruption that led to convictions of two former Cuomo aides and three developers, all of whom now face decades in prison. Not one word from Ed Braunstein on these disgraceful ventures.

According to State Comptroller Thomas DiNapoli, between January 2012 to September 2017, NYS needlessly spent $1.28 billion on wasted Medicaid payments and most of it is unrecoverable. DiNapoli said in a statement “Glitches in the State Department of Health’s payment system and other problems led to over a billion dollars in unnecessary spending. The department needs to improve its procedures and stop this waste of taxpayer money.” Where is the outrage from our elected officials? When elected as NYS Assemblyman of District 26, I will promise to be the caretaker of the taxpayer’s dollars. I have great experience in the budgetary process, and I will work tirelessly to insure taxpayer dollars are spent wisely and not wasted like the Cuomo projects and the Medicaid premiums.

Another scandal is the corruption and wasted taxpayer dollars of NYCHA. NYC agreed to spend more than $2 billion dollars over a decade to settle a federal investigation into health and safety issues at NYCHA. The city will spend an additional $1 billion dollars over the first 4 years as well as $200 million annually for each of the following years over the 10-year period. NYCHA needs an estimated $25 billion in repairs, up from $6 billion in 2005. A report from the city’s Department of Investigation found that NYCHA had failed to do lead paint inspections for years that were required by federal rules and city laws. This forced the resignation of former NYCHA Chief Executive Shola Olatoye. Mayor de Blasio defends his handling of this agency. If I handled my business in this manner, I would have been terminated immediately. Again, no response on this egregious issue by our elected officials. I will not tolerate the continued corruption or incompetence from our government; therefore, I will introduce term limits as my first legislative bill as Assemblyman.

Another concern is how our political posture has gone so radically left. Socialist principles and disdain for Israel puts us all in a state of trepidation. America’s economy is based on a capitalist system, and to give all services free would bankrupt the country and put the economy on a decline.

We also have to fight sanctuary state policies, closing of Riker’s Island that would put jails in our neighborhoods, and we need to put a stop to legal drug injection sites. Also, Governor Cuomo pardoned felons and cop killers. These are policies that jeopardize the safety and well-being of the people.

If the government can operate efficiently, we could spend on much needed infrastructure and lower taxes and reform the property tax assessment. We also can spend on much needed school safety programs. We need to train ex-military and police personnel and station them at every school with metal detectors and limited entry points. Keeping our children safe is my top priority and worth every dollar. Keeping the SHSAT entrance exam to specialized high schools is a must because those who study hard and get the best scores should be allowed admission to these schools. It should be based on merit and not racially based. If you want all students to gain entrance to these schools and be better prepared, expand the tutoring programs. Do not sacrifice our educational standards.

David Bressler is the Republican, Conservative and Reform Party candidate for State Assembly in District 26

« PreviousMarch with Our Club in the 3rd Annual India Day Parade!
Next »‎#WalkAway Campaign