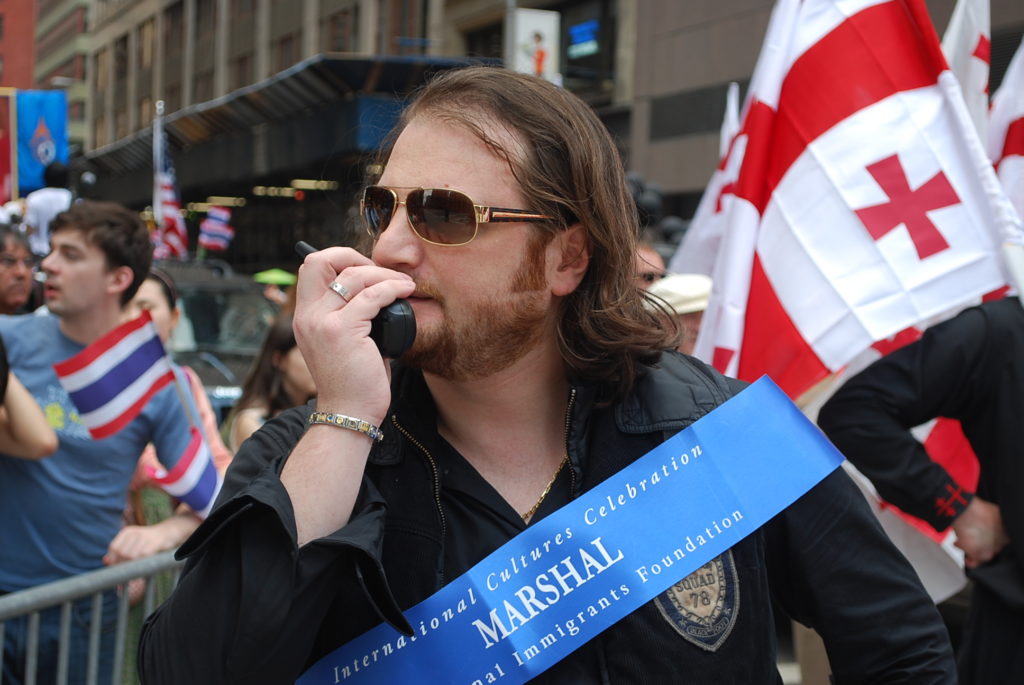 The day April ninth, 1989 will always remain fixed in the mind of Nikoloz Chkheidze. On that day in his native nation of Georgia, 50,000 peaceful protesters from this eastern European country of almost four and a half million people assembled in the capital city of Tbilsi, calling for their independence from the Union of Soviet Socialist Republics (USSR/ Soviet Union). Soldiers from that communist nation, which had held an iron fist rule over Georgia since 1921, used brute force to disperse the crowd; the  result was the deaths of 20 protesters and the injuries of hundreds of others.

Chkheidze, 46, whom I interviewed last week, was there that day witnessing the slaughter. “ I will never forget the faces of those martyrs who were killed and the hundreds of others who were injured. I will especially never forget the injured people being beaten while laying prostrate in   ambulances by Soviet soldiers.” he told me.  It was through the lens of a video camera that Chkheidze, then a 19 year-old sophomore in a six- year medical school program, had covertly taken with him to Tblisi that was to put a face on those victims for the world to see. Chkheidze, who had volunteered for this mission through a Georgian resistance group to which he belonged, chillingly described the events of the day.

“I was standing on a truck provided by the resistance group looking down at the crowds and soldiers on the avenue. My goal was to take videos without being spotted by Russian soldiers”, he explained.  But it didn’t  turn out as he had planned.  Recalling what happened, he told me, “ A soldier placed a machine gun to my head and another grabbed the camera from my hand…. I was full of shock and disappointment as I realized the video was gone.”

The story might have ended there, with the video, about four reels, nine minutes in all, lost to the world.  But something of a miracle was to occur. As Chkheidze was to later learn, the video somehow wound up in the hands of a Soviet appointed Georgian intelligence officer whose sympathies remained with his native land. That intelligence officer, whose identity still remains unknown, smuggled the video to legislators in the Georgia delegation of the Soviet Parliament in June of that year.

While that delegation was then but a token body which could have at the will of the Soviet Union been easily dissolved, dozens of its members took a courageous action. Defying the country which had so unjustly ruled their beloved nation for 70 years, they reached out to their Western media contacts and arranged to have Chkheidze’s videos broadcast on televisions throughout the western world.

These videos, playing throughout the summer of 1989, were considered by many experts in the region to be an enormous public relations disaster for the Soviets, whose communist system was beginning to crumble at the time. Reflecting on the role he and his video played exposing the events of April 9th, 1989, “ Those videos turned out to be a huge awakening to the world. But videos can only accomplish so much. There was much more that still had to be done.”

Much more was in fact still to be done.  One day later, citizens throughout the entire nation went out on strike, followed by the declaration of a forty day period of mourning.  In the ensuing days, months and couple of years there were to be more strikes as well as days of national protests.

With their backs now to the wind, 1991 was to be a big year for the people of Georgia. In a referendum held on March 31st,  99% of its citizens voted to become an independent state. Nine days later, on April ninth, the second anniversary of the slaughter (today universally known as the Tblisi Massacre or the Tblisi Tragedy), the newly formed Supreme Council of Georgia proclaimed the nation’s sovereignty and independence from the Soviet Union.  Its citizens soon thereafter elected their first democratically  chosen president, Zviad Gamasahurdia.  And on December 26th  Georgia’s  historical  nemesis, the USSR,  formally dissolved, and every one of the 15   former Soviet Republics, which included Lithuania, Estonia and Latvia,  became independent nations.

Seeing this new reality, the United States began to develop key political ties and important economic influence in Georgia; in addition, many Georgians, to the dismay of Russia, fearlessly expressed their desire to join NATO and the EU.  And in 1995, thanks to an independent national radio and television station founded by Chkheidze, Georgians were receiving their news from a free press for the first time in the country’s history.  “ All seemed to be going in the right direction….  Our citizens were filled with euphoria and optimism”, Chkheidze recalled.

When, however, Vladamir Putin came to power in Russia in 2,000, that euphoria and optimism were to soon end.  Alarmed at the growingly close  relationship developing  between Georgia and the West, Putin began to view Georgia as a threat to Russian interests in the area. As a result, over the next eight years the Russian and Georgian relationship steadily worsened, eventually deteriorating into an actual cold war type struggle. 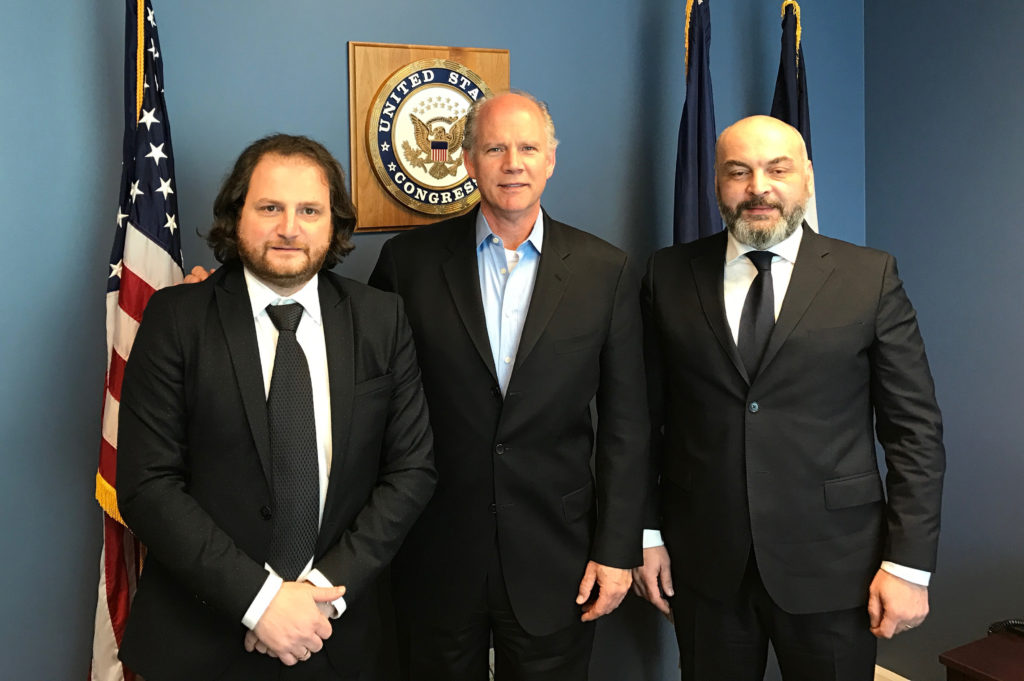 It was his wish to assist Georgia in this struggle which later that year motivated Chkheidze, who had graduated from medical school in 1995, to immigrate to America and settle in NYC.   “ It was not an easy decision for me to leave my country and my family and put my medical career on hold. But I had a great fear that the Russians under Putin might sometime in the future decide to take military action against my homeland…. I became convinced that I would have greater ability to work on behalf of Georgia by living and being based in the freest country in the world”, he explained.

Eight years were to pass before his “ great fear” became a harsh reality.  On August 1 2008, Russia launched an air, sea and land invasion of Georgia. Their goal was not to seize control of the entire nation, but rather to annex the large provinces of South Ossetia and Abkhazia; that goal was accomplished within a few days of battle, leaving Russia with 20% of the land mass of Georgia with a combined population of 400,000.

“ This was an outrage, analogous in America to a foreign nation taking   control of California and Texas.  It was so outrageous that the annexation was not recognized by any sovereign nation. So I was convinced that America and the west would apply pressure to coerce Russia to allow our two stolen provinces to be reunited with Georgia”, stated Chkheidze.

That pressure was never to come. Today, eight years later, Russia, whose dominance of Georgia appeared to have ended forever on December 26th 1991, controls two great provinces.   All of which leaves Chkheidze wrestling with a numerically modified form of the proverbial question-  – Is the glass half full or half empty?  “ Are we far better off than we were before we gained our independence in 1991?  Of course, we are. But with Russia now controlling two of our historic provinces, we have suffered a terrible setback”, he bemoaned.

Much has changed in the life of Chkheidze since coming to America.  He is now married with two young children and, while not currently practicing medicine in the United States, he works in a high level position in the health care industry.  But much has also remained very similar for him. In 2003, he founded and became president of Tvistomi Association, a Georgian /American tri-state community organization. As its president, he has kept a careful eye and at times been directly involved with the political development of the current 80% independent sphere of Georgia. Since electing its first president, Zviad Gamsakhurdia, (1991-1992), Georgia has changed presidents three times: Eduard  Shevardnadze (1992- 20003); Mikhal Saakashvili (2004- 2013); Giorgi Margvelashvili  (2013- present).

It was to be a leader in the campaign to replace the former with the latter that brought Chkheidze temporarily back to Georgia in 2013. “ It was his   weak leadership that emboldened the Russians to invade in 2008 that made it imperative to replace him”, he asserted.  And there was another reason for Chkheidze to oppose Saakashvilli:  in 2007, the latter deployed the Georgian military to breakup a series of peaceful protests directed against his government. During one of these protests several people were killed and scores of others were injured. “ Blood on the streets. Murder. Mayhem.  It was like the Russians all over again”, he lamented. “ It was a great victory for the people of Georgia to be able to in a democratic election replace him and his regime with Margvelashvili.”

If you assumed, though, that Chkheidze was fully satisfied with that new president, you would be wrong. “ There is still much more his administration needs to do on the international political front to convince the west to use their influence to coerce Russia to return South Ossetia and Abhhazia to Georgia. His administration also must make a greater effort to create a robust market economy, similar to that of America under John Kennedy, Ronald Reagan and now Donald Trump”, he stated.

There is one thing of which President Margvelashvilli can be assured:  A video maker/doctor/ patriot will be in New York City carefully monitoring the events in Georgia from 5,500 miles away.

Robert Golomb is a nationally and internationally published columnist. Email him at MrBob347@aol.com and follow him on Twitter@Robert Golomb

« PreviousMother Nature: The Great Equalizer
Next »Video: Heather Mac Donald Presentation on “The War on Cops”