“Swacch (clean) Bharat”, a highly publicized national campaign spearheaded by Prime Minister Modi a year ago, to clean and restore streets, roads and highways throughout more than 4,000 Indian towns….On a Consulate level, Swacch Consulate applies the same fundamental principle Prime Minister Modi used in his comprehensive Swacch Bharat national cleanup campaign. That principle is simply that a clean environment is essential to the physical and spiritual health and well being of every human being. 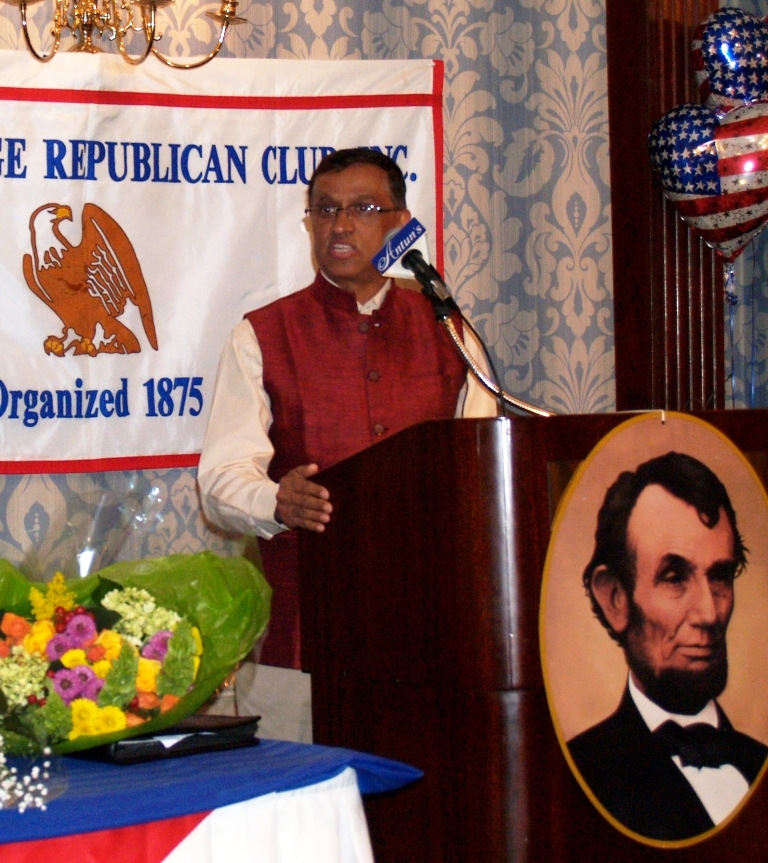 When then fifty three year old Dnyaneshwar Mulay was inducted as Consul General of India in New York City on April 23, 2013, it was said to come as little surprise to the people of India. Mulay had become well known throughout that nation of one and a quarter billion people for his governmental service during his thirty- year career. On an international level, that service included assignments to a variety of key diplomatic positions in locations as diverse as Tokyo, Moscow, Port Louis, Maldives and Damascus. And on the domestic front, his assignments covered an array of mostly major financial posts, including the high profile position of Director of the Ministry of Finance.

In addition, Mulay had become celebrated in India for his accomplishments in another field – that of literature. His fifteen non-fiction books, in which   he analyzed often complex educational, social, environmental, theological, technological and international issues, had won him national and international critical acclaim, along with a host of prestigious literary awards; also critically heralded were his one book of poetry, which describes the dilemma of young men and women trying to find meaning in post independence India, and his one novel, which was based on his own life story: that of rising from a humble childhood to his current prominence.

If you guessed, however, that with such an impressive resume, Mulay’s first initiative as Consul General, back in 2013 would be directly connected to his prior impressive public and private career, you would be wrong. “ In fact”, Mulay informed me when I interviewed him in the historic Consulate General Building in mid- town Manhattan last week, “ My first task when I took over eighteen months ago was to try to clean unnecessary papers stored in the building.”

Cleanliness Drive at the Consulate

Actually the papers he was referring to, some of which were past travel documents of Indian visitors to America going as far back as to just a few years after the turn of the 20th century, need to be cleaned. Citing the age of the building, Mulay explained, “ When I first toured the Consulate, which is one hundred and eleven years old, I saw that the basement, subbasement and passageways were jumbled with stacks of countless cupboard and documents, many very old”.

Mulay added that beyond his initial alarm about the unkempt appearance of the building, he feared the clutter presented a serious fire hazard; he also noted that he was concerned that this disarray would make it unnecessarily difficult for the Consulate’s twenty member staff to effectively organize current documents, including visa applications and passports of Indian citizens visiting America today. 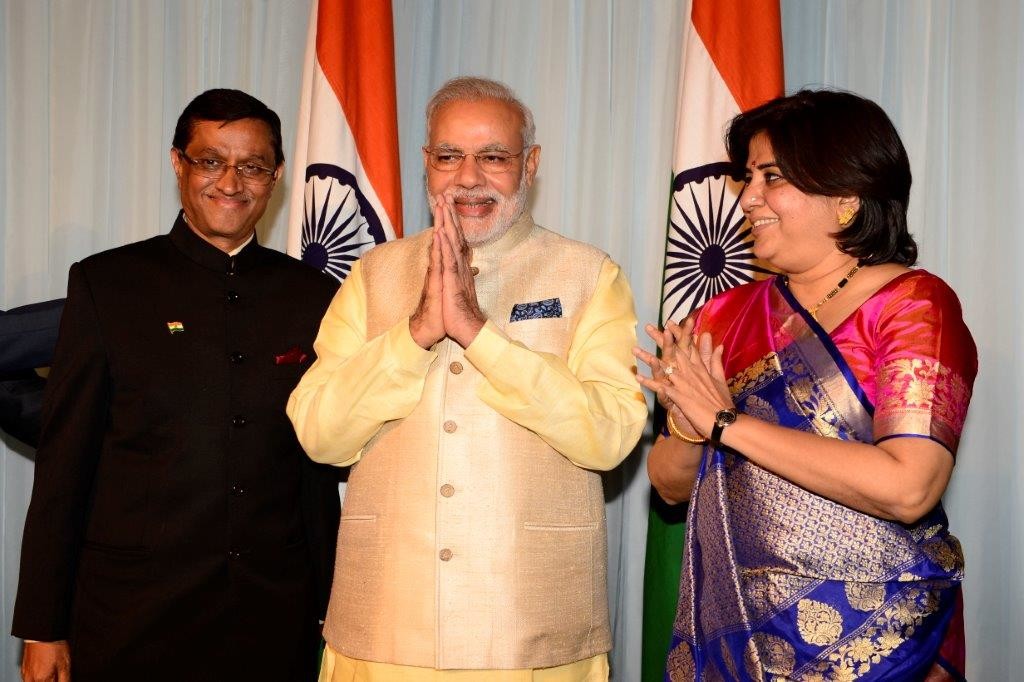 To address these concerns, Mulay said he applied the basic philosophy of     “Swacch Bharat”, a highly publicized national campaign spearheaded by Prime Minister Modi a year ago, to clean and restore streets, roads and highways throughout more than 4,000 Indian towns. “ We have attached the word Swachh {clean} to our own campaign which we call ‘Swacch Consulate’’’, Mulay explained. “ On a Consulate level, Swach Consulate applies the same fundamental principle Prime Minister Modi used in his comprehensive Swacch Bharat national clean up campaign.”

“ That principle’, Mulay elaborated, “ is simply that a clean environment is essential to the physical and spiritual health and well being of every human being…. For us, of course, cleanliness and, in turn, orderliness were prerequisites to achieving our goal of being able to safely store and accurately track the more than two hundred thousand documents entrusted annually to us by temporary and long term visitors from America to India and Indian passport applicants. ” 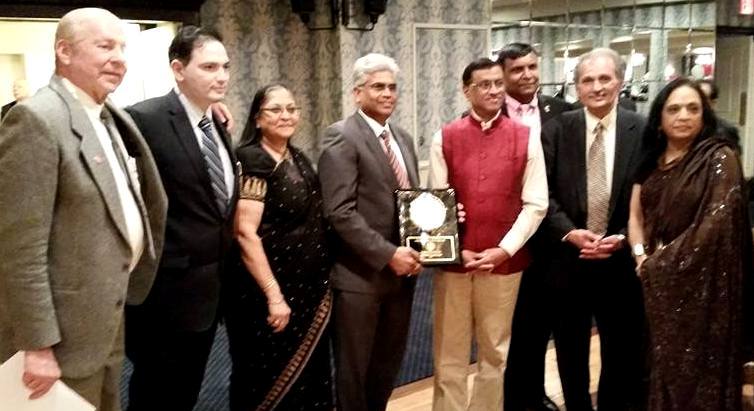 Consul General Mulay with Harshad Patel, Businessman of the Year at 2015 Lincoln Dinner

However, just as Mulay was reportedly receiving high marks from his superiors in New Dehli for achieving that goal, they assigned him to oversee another environmental related project in the Consulate. “ The Government of India and the Metropolitan Museum of New York partnered in a plan to modernize and renovate the Consulate Building, just about as we were completing the initial clean up. This modernization involves conservation of this landmark building, its interiors, woodwork, ceilings and fireplaces”, he stated.

“ The project” he continued, “ also involves the complete renovation and modernization of all of the visitor areas; this is extremely important because, in addition to people of Indian backgrounds, many of the visitors to our consulate are ordinary Americans, tourists coming from a variety of nations, foreign and American dignitaries, government officials and business leaders, and, also, members of the worldwide media. For them, our building is like a first glimpse of India itself. We all now feel proud that the clean, modern, beautiful ambience of the Consulate presents to all {of them} the image of a country that is emerging as a world leader.”

While this project consumed a great deal of his time and energy, Mulay  said he understands that such work is an essential part of the job. “ Improving upon and maintaining the physical condition of the consulate building has historically always been one of the two basic responsibilities assigned to the Consul General of every nation”, he explained.

Mulay, however, made it a point to emphasize that the time and effort he  continues to devote to performing this first responsibility does not interfere with his ability to perform the second of the two jobs traditionally associated with the position of the Consul General – which is to promote and increase trade between the home and host country. With trade between America and India trending upwards in recent years, reaching nearly 100 billion dollars this past calendar year, a historical high constituting a 60% increase from Pre- Modi India, Mulay said he feels exhilarated to be working in a position where he can help further develop this already burgeoning financial relationship between these two nations.

“ I feel extremely fortunate at this exciting time to be Consul General in America and thus to be able to work for implementing the vision of Prime Minister Modi who has re-invigorated the economic relationship between our two great nations”, Mulay stated. “ There has been under Prime Minister Modi a steady rise in the exchange of goods, services, labor and capital between America and India. And the main beneficiaries from both nations have been the consumer and the worker.”

The married father of 2 sons and one daughter, all young adults, Mulay, a    self described optimist, added that he believes, “ The close relationship now developing between India and America will be the bridge to a better economic future for every adult and every child from both nations, and, in these days of a global economy, the entire world.”

Robert Golomb is a nationally published columnist. Mail him at MrBob347@aol.com and follow him on Twitter@RobertGolomb

« PreviousAre the Lights Going Out on New York?
Next »March for Justice