Editor’s Note: This is syndicated columnist Bob Golomb’s latest column as published in the news and media outlet, The Published Reporter 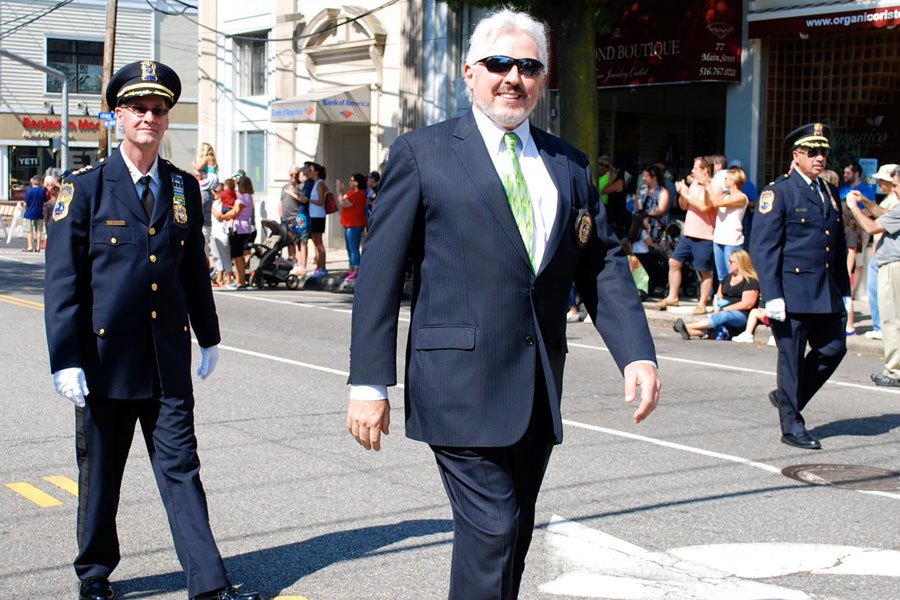 NEW YORK, NY – David Franklin, the Republican candidate in this coming November’s election for NYS State Senate in the empire state’s 7th Senate District, which encompasses Nassau County’s entire town of North Hempstead and reaches into small portions of the towns of Hempstead and Oyster Bay, credits his opponent, one term incumbent Democratic Senator Anna Kaplan, for initially motivating him to run for that office.

First focusing on what he contended was Kaplan’s anti-public safety voting record, Franklin, who served in the elected civilian position as 1 of 3 commissioners of the Port Washington Police Department from 2011- 2019, explained to me in a recent interview,

“When I saw that Senator Kaplan had voted in favor of bills, which, when signed into law by Governor Cuomo, jeopardized the safety of people in this district and, in fact, across Long Island and the entire state, I felt I had to do more than just complain. So I decided to run to defeat her, and then work with Republican and moderate Democrats to pass legislation to repeal what actually amounts to be pro criminal laws.”

Franklin, 63, the married father of two adult sons, cited Kaplan’s vote in favor of the Bail Reform Law as the most egregious example of what he asserted was her past support for “pro criminal” legislation. One of the most controversial provisions of the law, which was passed on April 1, 2019 and became effective on January 1, 2020, eliminates a judge’s power to set pre-trial bail for all misdemeanors and most non-violent felonies.

“There are more than 40 serious criminal offenses which judges are no longer permitted to set bail for” stated Franklin. “Those offenses,” Franklin elaborated, “include resisting arrest, selling a firearm to a minor, failing to register as a sex offender, and, as hard as it seems to believe, even defendants charged with possessing child pornography no longer are required to post bail.”

Franklin also attacked another provision of the law, which requires a judge to waive the bail of any defendant who the court determines does not possess the financial resources to pay it. This provision, as Franklin lamented, covers robbery, rape and murder defendants, who, paradoxically, even the under the new law would otherwise have had bail imposed on them. The Republican challenger was equally critical of still another provision of the law, which prohibits a judge from considering a defendant’s past record of criminal convictions when setting bail.

“This horrendous Bail Reform Law which my opponent voted for eliminates a judge’s authority to set a bail amount which reflects both the seriousness of the crime and the accused’s past criminal history,” stated Franklin. “As a result, some very dangerous people, who under the old law would be in jail awaiting trial, are now freely roaming the streets of our state endangering the safety of us all.”

While acknowledging that Governor Cuomo and the state legislature (which Democrats currently control by a 39-24 majority) have recently enacted some minor modifications to the bail law, Franklin contended that it remains essentially unchanged. “While a few superficial changes were made, what it amounted to is rearranging the chairs on the Titanic,” Franklin charged.

Continuing to focus on his opponent’s record on public safety, Franklin also criticized Kaplan for what he argued was her failure to condemn the violent criminal activities of such radical groups as the Black Lives Matter Movement and Antifa.

“Bands of rioters led by Black Lives Matter and Antifa have looted, ransacked and burned stores in mid-town Manhattan, and far beyond, where millions of Long Islanders along with their counterparts throughout the state once shopped and worked, as part of their ordinary lives,” stated Franklin. “These same groups of anarchists have attacked and injured more than 350 NYC police officers and disabled dozens of police vehicles. And yet Senator Kaplan appears oblivious to all of this.

“You would think,” Franklin added,“that Senator Kaplan would use the political power and moral force of her office to condemn these violent thugs for destroying property, stealing merchandise and attacking New York City’s brave and embattled police officers. However, just like the governor and her Democratic senate colleagues, she has remained deafeningly silent.”

While Franklin’s criticism of Kaplan focused mainly on public safety, he also slammed the incumbent for voting against a recent business- related amendment sponsored by the New York State Senate Republican Conference. The amendment, which had it been enacted would have provided relief to small business owners, who, since the covid-19 massive employee layoffs began across the state 6 months ago have been paying significant increases for unemployment insurance – was also opposed by Governor Cuomo and the Democratic majority in the state senate.

“This amendment, without, it is essential to understand, reducing the actual amount of unemployment insurance paid to the unemployed, would have cut the rate paid by small business owners who were devasted by the covid-19 pandemic and are now fighting to reopen their businesses and rehire their employees. Why Governor Cuomo, Senator Kaplan and her Democratic senate colleagues opposed this pro- small business amendment is a question I would like all of them to answer,” chided Franklin, who in addition to his 9-year tenure as Port Washington Police Commissioner, had worked in private industry for more than 35 years.

Referring to Kaplan’s position as Chairperson of the Senate Committee on Commerce, Economic Development and Small Business, an entity which offers financial aid and other forms of assistance to small businesses and starter-up companies, Franklin added, “As the chairperson of a committee set-up to support small businesses, Senator Kaplan’s  vote against an amendment designed to help small business owners would be difficult to understand under any circumstances, but especially incomprehensible during this challenging time when as a result of the corona virus caused shut-downs, many business owners need assistance from the state to once again be able to serve their customers, rehire their employees and earn a good income for themselves and their families.”

Franklin’s final criticism of Senator Kaplan related to the severe population decline in New York State, which, according to U.S. Census Bureau, as of the end of 2019, had more citizens that same year moving to other states than any other state in the nation- a trend which based on some current estimates, appears to be increasing in 2020.

Franklin attributed this exodus to what he asserted were the failing tax and earlier discussed criminal justice policies of Governor Cuomo, Senator Kaplan and her Democratic senate colleagues.

“Governor Cuomo with the support and votes of Senator Kaplan and her fellow Democrats has imposed a heavy tax burden on business owners, workers and home owners. That, I believe, is 1 of the 2 main reasons why New York State is losing so many of our citizens to other states. The other major reason,” Franklin continued, “as we discussed before, is the surge in crime caused by the Bail Reform Law and other misguided and dangerous Democratic initiated criminal justice laws, which have made many people afraid to continue to live and raise their families in the state. If I am elected, I will work to undo the harm created by the entire Democratic machine.”

Whether or not the voters of the 7TH District give Franklin that opportunity is, in the absence of reliable polling data in this contest, very difficult to predict. While the district’s registered Democrats currently outnumber registered Republicans by a 40.4 % to 28.4% margin, prior to Kaplan’s impressive 55% to 45% victory over then one term incumbent Elaine Phillips, Republican Jack Martins had been elected first elected to the seat in 2008 and re-elected in 2010, 2012, and 2014, with Phillips winning in 2016.

Still, when asked whether he was encouraged by the prior to 2018 success of Republicans in the district or discouraged by both Kaplan’s decisive win 2 years ago and the significant advantage Democrats hold over Republicans in registered voters, Franklin responded that while he was aware of these facts, he finds them to be unimportant.

“I am aware of but not influenced by the outcomes of past elections or by voter party affiliation. Rather, all of my energy is spent on working as hard as I can along with my excellent campaign team, so we can win this election and help make New York State become great once again.”

He and we will have to wait until after all the votes are counted in the late evening of election day, November 3rd, to learn whether or not that hard work paid off.

Robert Golomb is a nationally and internationally syndicated columnist. His work has appeared in The South Asian Times, The Epoch Times, The Long Island Jewish World group of papers, the Muslim Community Report, the Messenger and more. You can email him at MrBob347@aol.com.