The Other Forgotten Heroes of 9/11

There were approximately 40,000 responders who came to ground zero the day of and the days, weeks, and months following the attacks of 9/11. These too often unremembered heroes included those in uniform—police officers, correction officers, firefighters, EMS workers, military personnel—and also civilian responders—electricians, plumbers, maintenance workers, demolition operators, Red Cross volunteers, and so many others.

This column by Robert Golomb appeared in the June 30, 2014 issue of The Epoch Times 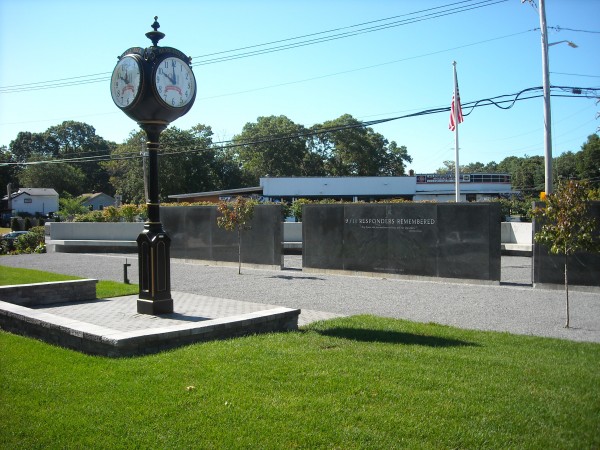 “My son didn’t die on 9/11, but it was 9/11 that eventually killed him,” said Stephen Grossman when I spoke with him recently at the 9/11 Responders Remembered Park located in the town of Nesconset in Suffolk County, N.Y.

The late son he remembered was named Robert Grossman. Robert, I learned, was a NYC police officer assigned to the 28th Precinct in Harlem—a precinct in which he served since the day after he graduated from the NY Police Academy in February 1994 until the day in April 2006 that his illness forced him to leave the job and eventually resulted in his death on Oct. 9, 2009, at the age of 41.

The illness that took the life of Robert Grossman—who left behind his wife Carla and son Noah, now 11, and who in 2010 was posthumously declared “A Hero of 9/11″ by the NYC Police Department and later was honored with a Distinguished Service Medal from NYPD and a Medal of Valor from the state of New York—was a form of cancer called brain cell glioma.

And his father, as were his doctors, is certain of its cause. “Robert was sent to ground zero after 9/11 and spent three weeks there among the rubble, disease, and devastation,” he said. “It was during that time that his exposure to deadly toxins eventually resulted in the cancer that was to take his life five years later. … Yet, even when he knew he was dying, he never once said he was sorry he went down there. As a police officer, he knew it was his responsibility.”

Robert Grossman’s fate, it is known, was neither rare nor unique. There were approximately 40,000 responders who came to ground zero the day of and the days, weeks, and months following the attacks of 9/11. These too often unremembered heroes included those in uniform—police officers, correction officers, firefighters, EMS workers, military personnel—and also civilian responders—electricians, plumbers, maintenance workers, demolition operators, Red Cross volunteers, and so many others.

There is a general consensus within the medical community that most if not all of these responders were exposed to deadly toxins that emanated from debris, dust, and plastic that caused the illnesses that eventually claimed the lives of many.

A Growing Toll
How many still remains an open question. The difficulty, I learned, involved in identifying, recording, and analyzing the death certificates of post-9/11 responders—many of whom came to ground zero as volunteers from states across America and from nations throughout the world—makes it extremely hard to come up with clear estimates of the number of these heroes who have died as a result of their exposure to these toxins. However, there have been estimates placing that number to be in the range of 2,000.

Of those, Grossman told me the names of approximately 300 of the dead are engraved in the granite wall standing within the park’s 4-acre parcel. Grossman explained why he provides an approximate rather than an exact number.

“The count,” he lamented, “is always going up, and it is not the type of addition that you want to do and remain sane. … Last week we received the names of two more responders who passed away. Their names will be added to the memorial at our next ceremony. … And we know that the names we receive are but a fraction of the actual number of deceased responders. Also,” he added, “rather than as a hard, cold number, I want to think of each one of these heroes as a unique individual who once lived his or her life upon this earth and died too early. Just like my son.”

As we paused at the wall to view the listings of these heroes, Grossman pointed to the names firefighter Richard Mannetta and Police Officer Cory Diaz. These two 9/11 responders, he informed me, had died within the same week as his son.

“For those who deny the connection between all of these people dying or battling illnesses and their service at ground zero,” he stated referring to some lawmakers who have expressed doubts about the connection between the responders’ service at ground zero and their eventual illness or death, “I implore you to come here and look at the names engraved in stone on these walls forever and explain why these responders, all of whom worked in the same place and in the same environment within the same period of time, are dying in clusters. It simply cannot be a coincidence.”

9/11 Responders Remembered Organization
Grossman, a 73-year-old retired NYC high school teacher, told me that he devotes his time now to honor the memory of his son and other 9/11 responders who have passed away by serving on the board of the 9/11 Responders Remembered organization. The organization was first created in 2009 by small-business owners, union members, community leaders, local elected officials, ordinary Suffolk County citizens, surviving 9/11 responders, and the widows, parents, children, and siblings of deceased responders. Its goal to build a privately funded park that honored the service and sacrifice of 9/11 responders, the first at the time of its kind, was fulfilled three year later with the unveiling of the First Responders Remembered Park on Sept. 10, 2011.

As we continued to talk, Grossman proudly told me that from start to finish the park was totally privately funded, receiving contributions from many of the same people and groups that first helped found the organization. The work of the board, which currently meets once a month, involves the day-to-day maintenance of the park, which Grossman said is paid for with private funds.

The board also focuses upon planning for the twice-yearly official ceremonies held on or around Memorial Day and on or around Sept. 11 when the names of recently deceased 9/11 responders whose deaths were determined to be caused by their work at ground zero are added to the park’s sacred walls. This past May, Grossman informed me, 92 names of America’s still unsung heroes were added.

Grossman stated he rarely misses a board meeting. “It is my way of showing my appreciation, admiration, and respect for all the 9/ 11 responders,” he said, “and of saying to my son Robert that I miss you every moment of every day and will always love you.”

Robert Golomb is a nationally published columnist. Contact him at MrBob347@aol.com