Christians under fire in the Middle East 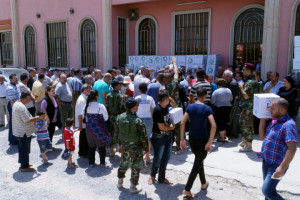 Displaced Christians wait for humanitarian aid
at a church in Hamdaniya, Iraq

In a recent editorial the New York Post bring much needed attention to “Iraq’s abandoned Christians” asking the question: “Does innocent human life matter in the Middle East if it is Christian?”

Since Israel has been defending itself from deadly Hamas rockets and terrorist tunnels, we have heard nothing but worldwide condemnation. But when it comes to the ethnic cleansing of the historical Christian community in Iraq and the “conversion or death” ultimatum to all Christians living in the newly declared caliphate, the Islamic State of Iraq, the world is silent.

Our own QVGOP Club member and prolific political writer Fred Bedell wrote the following reply which was published in the Sunday New York Post:

Christians in the Middle East and elsewhere are suffering a tremendous amount of prejudice, bigotry, and intolerance for practicing their faith. This includes the burning of Coptic Churches in Egypt, the imprisonment of a pastor in Iran and the exodus of Palestinian Christians. Now in Iraq Christians are ask to convert or pay a heavy tax or die. The nations of the world including our own under the Obama administration don’t seem to be too concerned about their plight. In the Western World and that includes the United States those of different faiths are protected under the law without prejudice. Yet in some Muslim countries those of different faiths are not tolerated and are ask to convert or to leave or die. As a Catholic and as Grand Knight of St. Anastasia Knights of Columbus council #5911 in Douglaston.

I pray for my fellow Christians in their hour of need. Remember this too: Evil thrives when the nations of the world do nothing !

« PreviousChris Moss: The Sheriff Running For Lieutenant Governor
Next »Tribute to our Finest