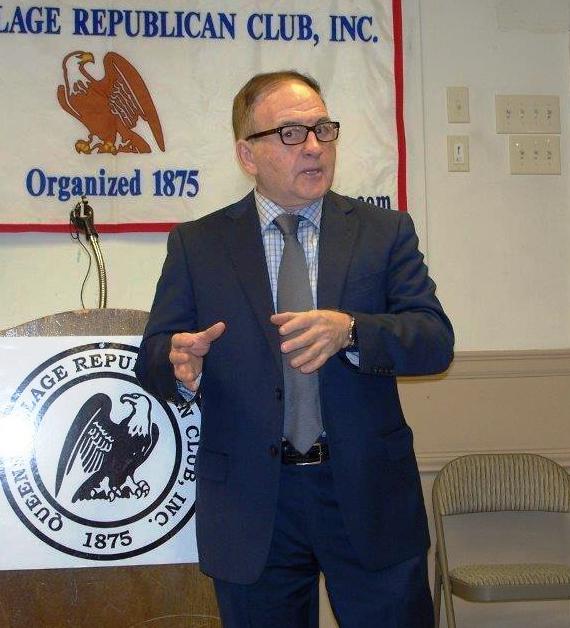 “….his “radical proposal” to wake our neighbors and send an army of Mr. Smiths to Washington to cut programs and close agencies may be the only way to save our country.”

Dr. Jerome Huyler didn’t know what to expect from his presentation at the General Club Meeting of the Queens Village Republican Club. However, most of the attendees at the November 13th meeting of America’s oldest Republican Club at the Knights of Columbus hall in Glen Oaks, agreed that his “radical proposal” to wake our neighbors and send an army of Mr. Smiths to Washington to cut programs and close agencies may be the only way to save our country. His proposal raised many questions and provided everyone with ample food for thought about the size and scope of government.

Dr. Huyler, assistant professor at Seton Hall University in NJ and author of “Everything You Have: The Case Against Welfare,” teaches a freshman orientation class that serves as a moral guide to personal responsibility in life and avoiding peer pressure for young adults finding their way in a complex world. He said that we all need to ask the fundamental questions of “what” and “why” government exists rather than repeating the standard Republican talking points of “limited government” and “cutting taxes.”

He explained that all the current proposals for a flat tax, fair tax, term limits, balanced budget amendment and so forth, are merely treating the symptoms. They are not actual solutions. To get to the root of run-away spending of our hard earned tax dollars, we need to distinguish legislation for legitimate spending from illegitimate spending. 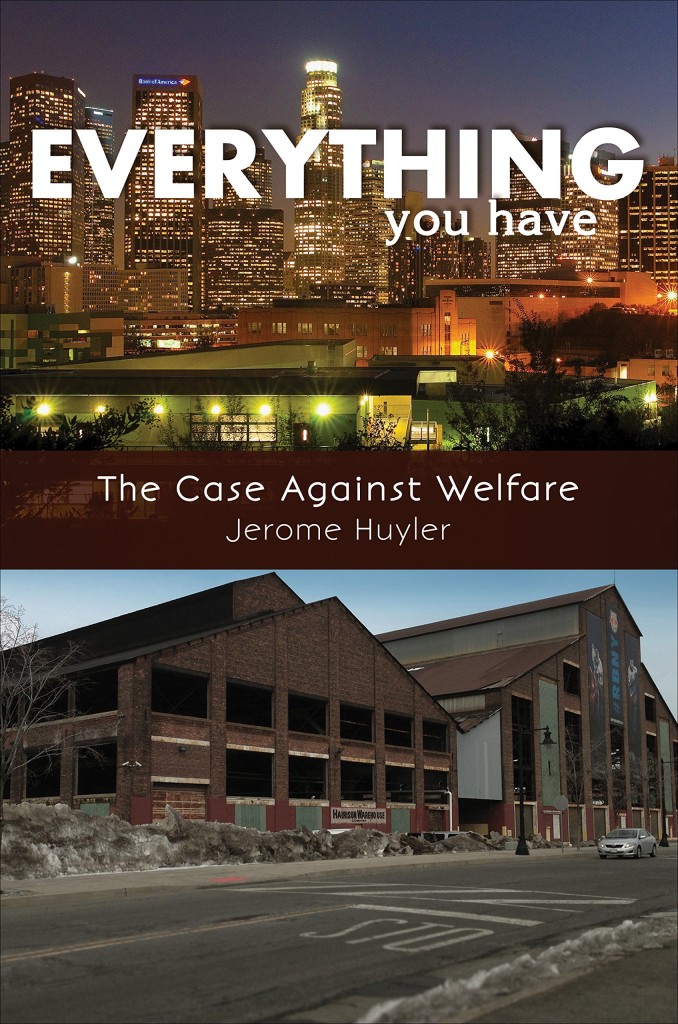 To make this distinction, we need to ask “what is government for?” and “what is government supposed to do for us?” Dr. Huyler stated that government has no power until we delegate it; the government gets its power from the people.  Thus, all other government powers are in essence illegitimate. He spoke of the four fundamental rights of the people expounded by John Locke, who laid the ideological foundation for the American Republic: 1) The right to life; 2) Liberty; 3) Property; 4) The right to defend our other three rights. We cannot practically defend ourselves, which would lead to a state of anarchy if we did. It’s government’s job to defend us and to protect our rights.

Government should be our protector, he declared. We need the strongest armed forces, the strongest police forces to protect our streets and homes, strong jails, incorruptible judges, as well as our FBI and CIA.  But government should not be our provider. Giving to some at the expense of others is not the role of government. All forms of welfare and anti-poverty programs such as food stamps, farm subsidies, member items, bailing out companies that are “too big to fail,” and housing subsidies, are all about politics and not about governing, because the more the supply of benefits, the more the demand, and the more the votes and campaign contributions will go to those imprudent politicians promising the hand-outs. Huyler said we see that the current administration works against business interests and prosperity and provides benefits like a “gravy train.” By the time Barack Obama is out of office our country will have a $20 trillion debt.

Huyler posed the question, “When did it all start?” and traced the American welfare system all the way back to the second bill of George Washington’s administration, the Tariff Act of 1789, where tariff protection raised prices on imports to protect Northern manufacturers. This helped them make a profit by policy, not free markets. All forms of welfare, whether welfare for manufacturers or individuals, take money from some and gives it to others. Once a nation decides not to go out and get, but to sit and be given, we are in trouble. Today we see a great demand for benefits and that the more the people get, the more they want.  This is the “door of disaster” he stated.

Huyler called for the “Great American Welfare Revolt.” There is no painless way to wean us off of welfare.  Once welfare ends, taxes will come down.  He said “a nation is as great as it is free.”  Americans are the most generous and compassionate people in the world. The annual Jerry Lewis Telethon shows the compassion of ordinary Americans for their fellow citizens who need help.  The American people, their churches, synagogues, clubs and associations will step up and provide for their indigent neighbors. African American author Jason L. Riley wrote a book called, “Please Stop Helping Us” about the well-intentioned welfare programs that harm their intended beneficiaries, and in Chicago, ex-cons are trying to get people off welfare.

Practically speaking, Huyler said that if the welfare programs would suddenly end, the whole country would be in chaos. The transition, like the treatment for heroin addiction, must take time. Today there are competent think tanks such as Heritage Foundation, Cato Institute and American Enterprise Institute, the leading voices of liberty at work advising on policy and making recommendations for the orderly transition away from government-sponsored welfare.   Since most everyone at the meeting and also the majority of Americans wholly agree that our country is headed in the wrong direction, Dr. Jerome Huyler’s “radical proposal” for ending welfare gives us pause for thought and makes a lot of sense.

« PreviousRequest for an apology and retraction of false statement about Republicans
Next »The Homeless Crisis Hits Queens!