At nearly $4000 per month that the city pays for a prison-like cubicle to house a homeless family, the landlords and operators have found that capitalizing on the property as a shelter is much more profitable than maintaining the building as a hotel. Homelessness has been exploding in NYC, because it is such a lucrative enterprise at the taxpayers’ expense. Another example of a government welfare program run amok. 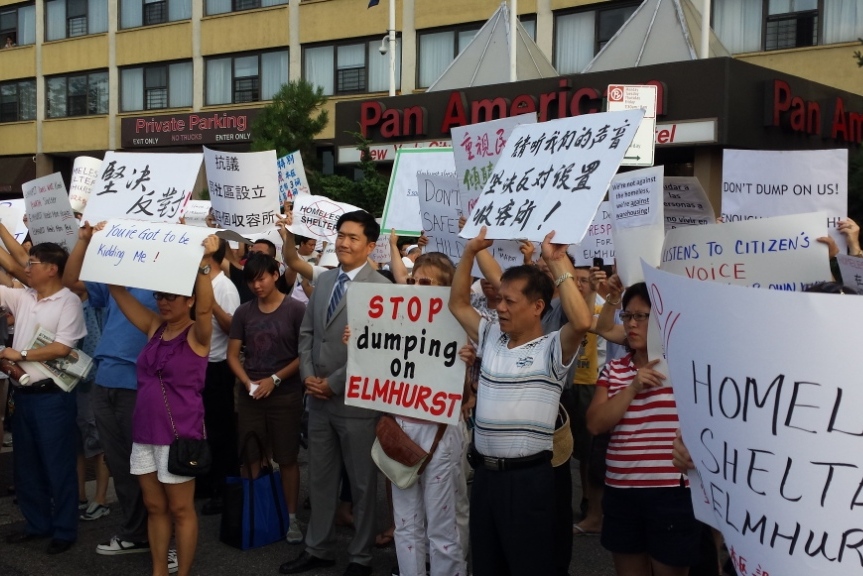 New York City has a “right to shelter” law which affords shelter to everyone, and is the only city in the United States to have this unique legal protection for the homeless.  In the last five years, the city’s homeless population has soared by over 50%, with many flooding in every week from Florida, Puerto Rico and from every other part of the country and from across our borders. As thousands of New York business owners and taxpayers flee the high taxes, oppressive regulations and high cost of living, many thousands more homeless and illegal immigrants pour into the new mecca of progressivism for the best welfare entitlement deal offered anywhere else in the country at taxpayers’ expense. 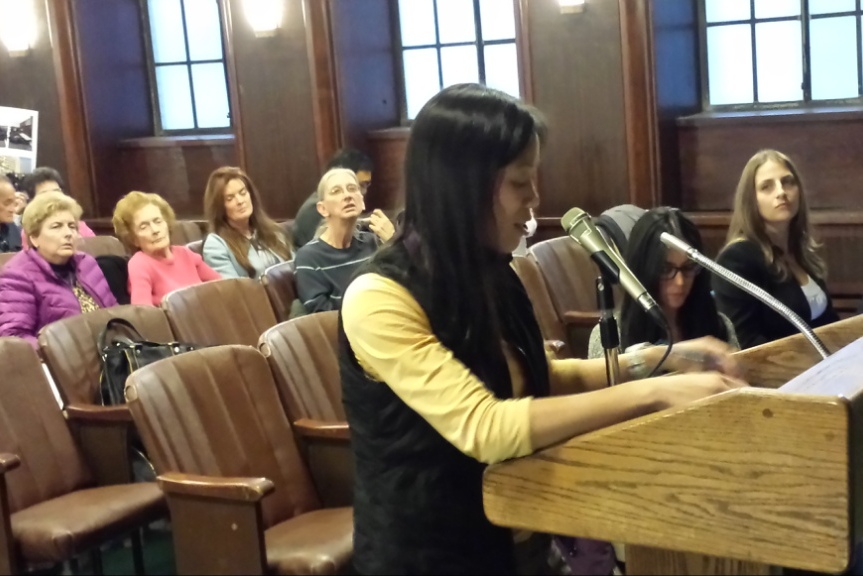 Jennifer Chu, organizer of the umbrella group, Elmhurst United
testifies against the DHS contract award of $42 million
to Samaritan Village to operate a homelss shelter
at the former Pan American Hotel

If this crisis isn’t bad enough, City Council Speaker Melissa Mark-Viverito called for the city to provide shelter to the illegal alien children from Central America, 60,000 of whom recently crossed our border, and over 3,000 landed in NYC. State Senator Adriano Espaillat is pushing for the city take in 10,000 of these children and grant them protected immigrant status.

Since Mayor de Blasio took office in January, he has added three new shelters in Queens including the overnight conversion of the Pan American Hotel in Elmhurst into a mammoth homeless shelter, without proper community notification. He plans to add many more shelters to address the homeless crisis and has mentioned adding more than a dozen in Queens alone. As he rolls out his ambitious plans, he is oblivious to the protests of homeowners and community residents who fear the likelihood of rising crime, plunging home values, and homeless students burdening the already overcrowded schools. 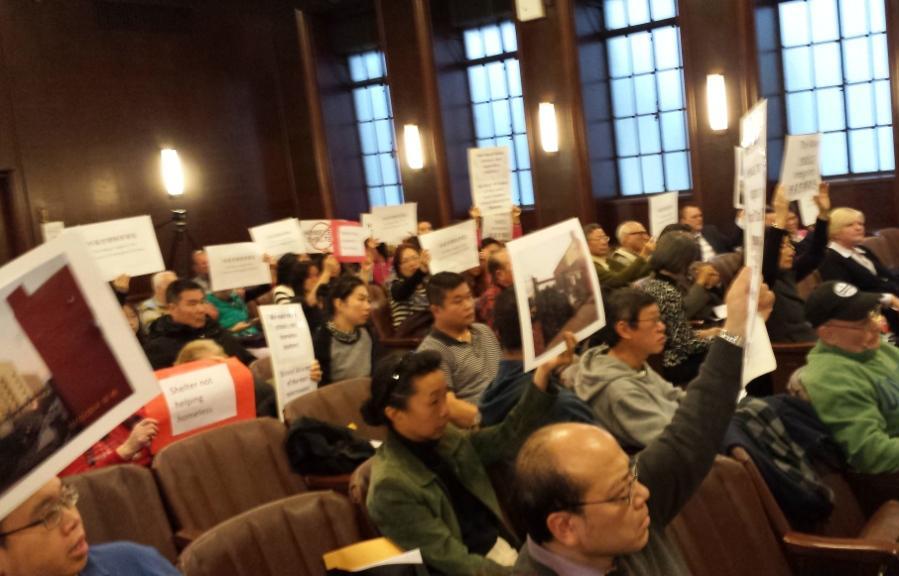 Elmhurst residents come out in force to protest
the proposed Samaritan Village contract at the
Public Hearing on Contract Awards, Nov. 13, 2014

NY City Councilman Daniel Dromm has welcomed his “new constituents” of over 600 new homeless residents in the former Pam American Hotel and denounced the members of the peaceful hardworking Asian immigrant community who are protesting the shelter, as “racist.” This is good for him politically because the new residents of the homeless shelter in his district will likely register as Democrats and will help guarantee him another term of office. This is also good business for the operators of the new homeless shelters who contribute generously to Democrats’ campaign coffers. At nearly $4000 per month that the city pays for a prison-like cubicle to house a homeless family, the landlords and operators have found that capitalizing on the property as a shelter is much more profitable than maintaining the building as a hotel. Homelessness has been exploding in NYC, because it is such a lucrative enterprise at the taxpayers’ expense. Another example of a government welfare program run amok. 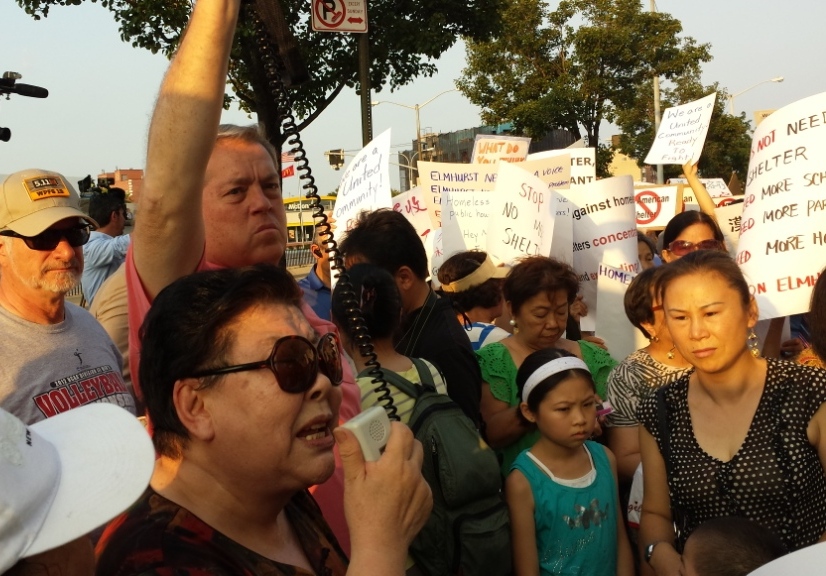 Some Queens Village Republican Club members have been involved with the Elmhurst community for the past six months since the Department of Homeless Services started secretly transferring homeless families into the Pan American Hotel after a representative of the DHS promised the community that the hotel would not be used as a facility for the homeless.  We participated in mass protests in front of the new shelter which the DHS soon filled to capacity, without addressing the needs of the community. At a series of protests and hearings we joined the community in challenging the DHS’s secretive process, the lack of transparency and utter disregard of the community boards and the residents, fears of a rise in crime, as well as misappropriation of funds, malfeasance and illegality of the process itself, and that the shelter is an unfit facility for suitable living.

“The crowd of 500 included grandmothers and small children, Chinese immigrants and the president of a local Republican club, all shouting that the mayor had trampled their rights….Several Chinese people at the protest on Tuesday said they believed that the city had intentionally targeted their neighborhood. “Government always picks on an easy area,” said Edward Fung, 62, saying that historically the residents of Elmhurst had not been politically organized.”

The most effective way to fight back is with political power. Now is the time for the neglected immigrant communities of Queens that share our Republican values of hard work, merit, free markets, personal freedom, family values, and pursuit of the American Dream, come and join together with us, register as Republican voters and find great leaders from within your own communities to run as Republican candidates against the jaded Democrat elected officials who have taken you for granted. The Queens Village Republican Club welcomes you to the Republican Party!

Join us! Everyone is welcome. We hope to see you and your friends as we celebrate our Holiday Party on December 4, and celebrate a glorious New Year of freedom and prosperity!