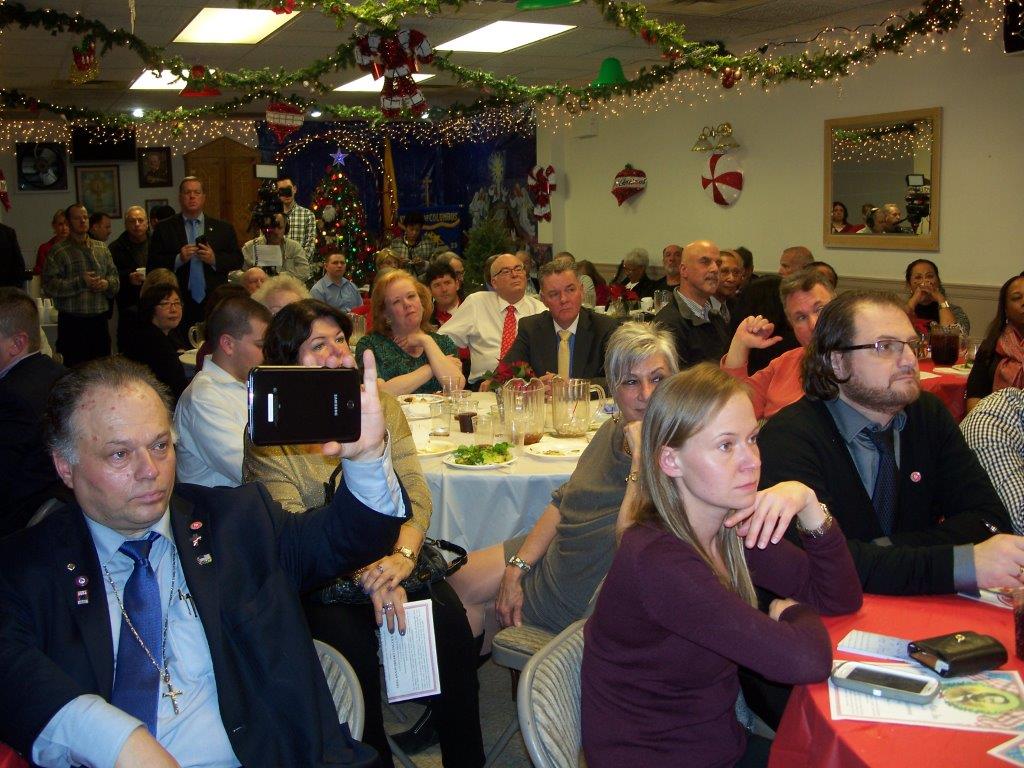 The Queens Village Republican Club kicked off the holiday season early with our New York State Republican Party Chairman, Ed Cox’s call for GOP unity. A delicious hot buffet dinner was served and there was a toy drive to benefit orphans and children of domestic violence, sponsored by the NYPD 104th Precinct.  Over 100 people celebrated together at the St. Anne’s Council meeting hall at the Glen Oaks Knights of Columbus on December 4th for the annual QVGOP Holiday Party to partake in the holiday joy and spirit of camaraderie and giving. 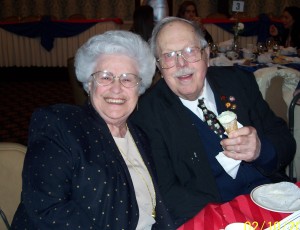 Mary and Harvey Moder at a past
Lincoln Day Dinner Celebration

The program began with a brief tribute to NYC Republican heroes who recently passed away. Harvey Moder, who was the beloved past president of QVGOP and a long time board member died peacefully on Monday evening. Harvey was the human dynamo responsible for rebuilding the Club over 20 years ago, reviving our Lincoln Dinner celebrations and our newsletter, the Queens Village Eagle. The QVGOP is alive and growing strong today because of Harvey Moder’s pioneering efforts. Harvey was a WWII Veteran, A NYC Fireman, A NYC Public school science teacher and Commander of the American Legion. 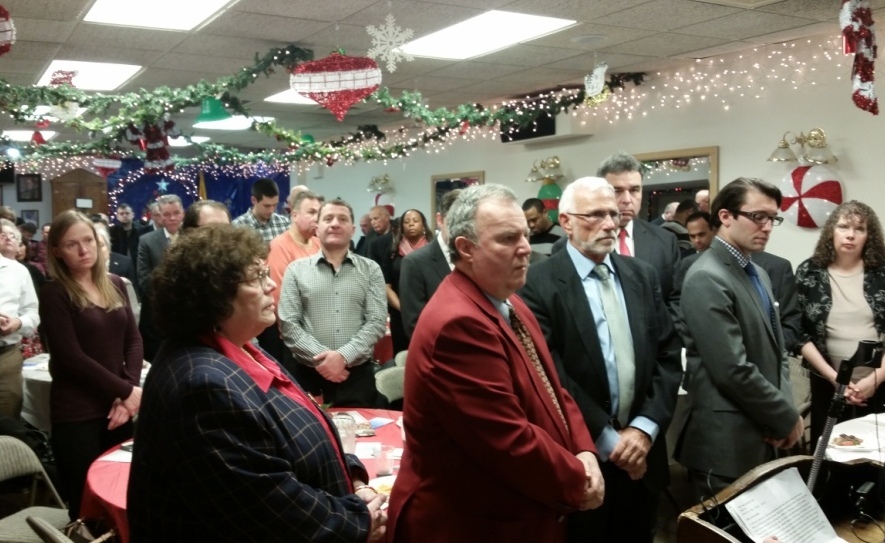 Everyone stands for a moment of silence for our dear departed
Harvey Moder, a “real life American Hero.”

He was honored in Congress for his advocacy for our missing American soldiers, and organized rallies in front of the White House and the UN for our POW’s and MIA’s. He was called a “real life American hero” in the congressional record. A moment of silence was called for Harvey as well as our dear deceased board members, Rose Daddario and Rabbi Morton Pomerantz, who passed away earlier this year, and a great NYC Republican, Herman Badillo who restored high academic standards to the City University of New York and was honored as our Educator of the Year at a past Lincoln Dinner. 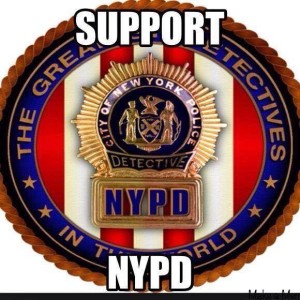 It was an occasion to celebrate, eat, drink and be merry with Chairman Cox, local Republican candidates Grant Lally, Doug Lee, Frank Scaturro, Michael Conigliaro, as well as Senator Jack Martins and Congressman Bob Turner. Club President Phil Orenstein said “We all came together because of politics, because we all believe in the same core Republican principles of limited government, individual freedom, free markets, pursuit of the American Dream and the rule of law. Everyone has been jumping on the cop bashing bandwagon in the aftermath of the recent grand jury verdicts, but we stand solidly behind the NYPD who put their lives on the line every day to keep us safe and secure. ‘Support Your Local Police’ is our mantra. But tonight we’re here to celebrate our friendship, unity and diversity as America’s oldest and perhaps most diverse Republican Club.” 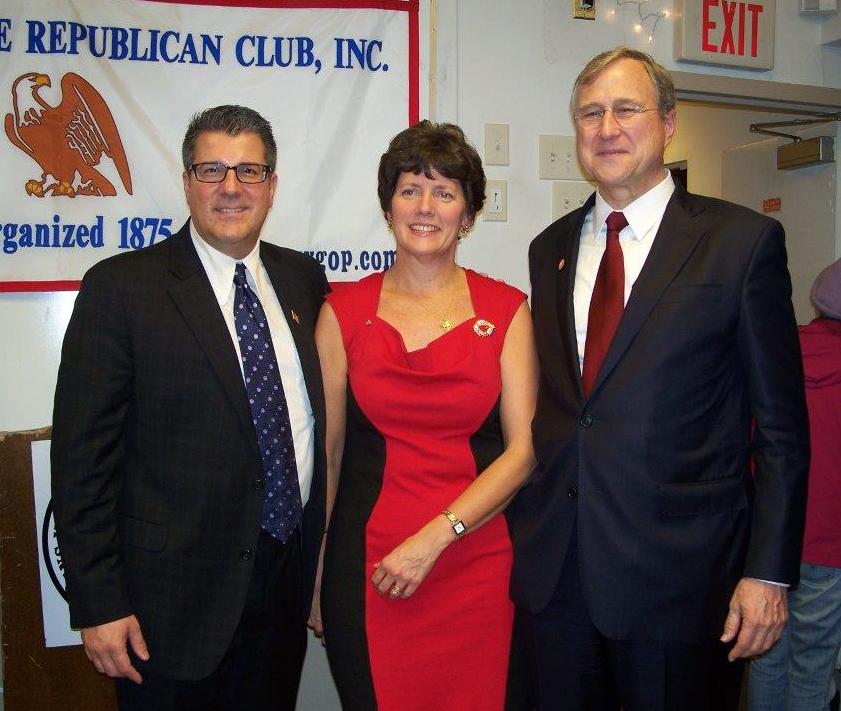 New board member Catherine Donohoe, President of the “Bridge to Life,” spoke of the spirit of Christmas and her work with the “Celebration of Hope,” helping the city and community with issues of crisis pregnancy and pro-life causes. She said “where there is life, there is hope,” and unlike Governor Cuomo who notoriously said that pro-life New Yorkers have no place in the state, we welcome people of all opinions and beliefs.

New Faces of the Republican Party 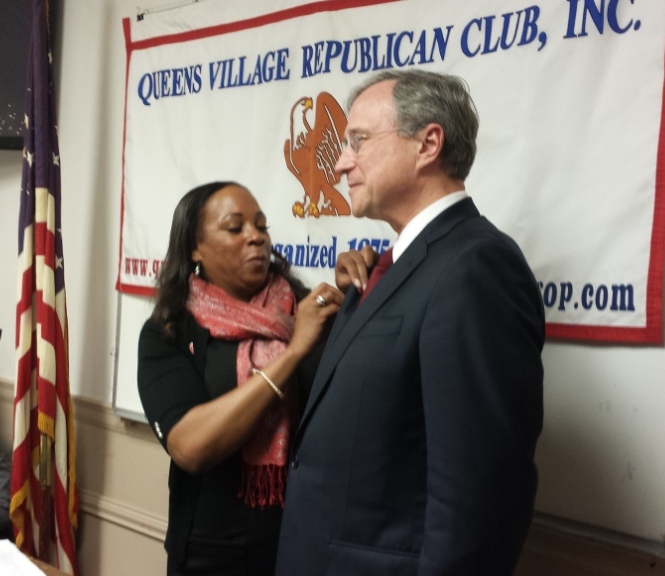 Our newest registered Republican and Club member, Bernadette Semple came up to the podium to “pin” State Chairman Cox with the official QVGOP Club pin. She recently ran as a Democrat in a State Senate Primary in Southeast Queens. She proudly showed off her Board of Elections registration approval she just received in the mail. As a minority, she felt she has been warmly welcomed and supported with open arms in the Republican Party. She said she shares our core beliefs which most all minorities embrace, saying that “they are all Republicans, they just don’t know it.” 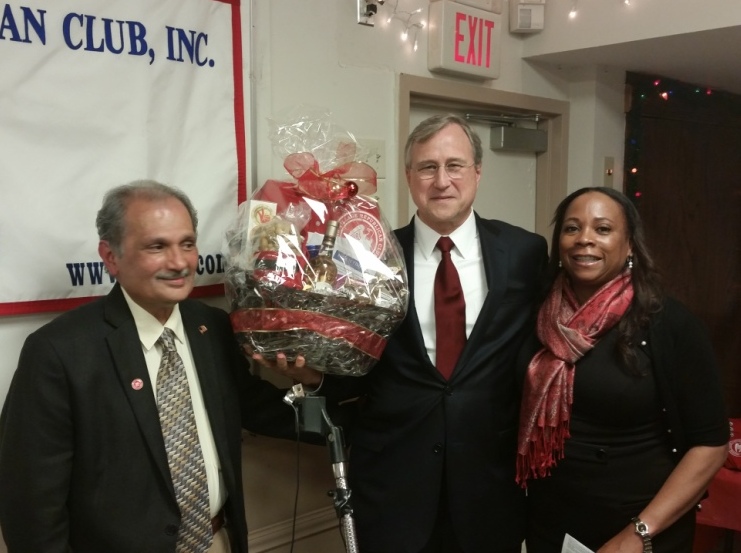 A presentation of a special hand-made gift basket was given to State Chairman, Edward Cox, by Hemant Shah, our new Club Vice President and past president of the Jain Center of America. He quoted Ronald Reagan who said “all great change in America begins at the dinner table” and declared that “tonight, this evening, right from our dinner tables, the change begins.” Welcoming our chairman, he said that Chairman Cox is here to make changes in Queens, in order to “win back this borough, this city, this state, and this country.” 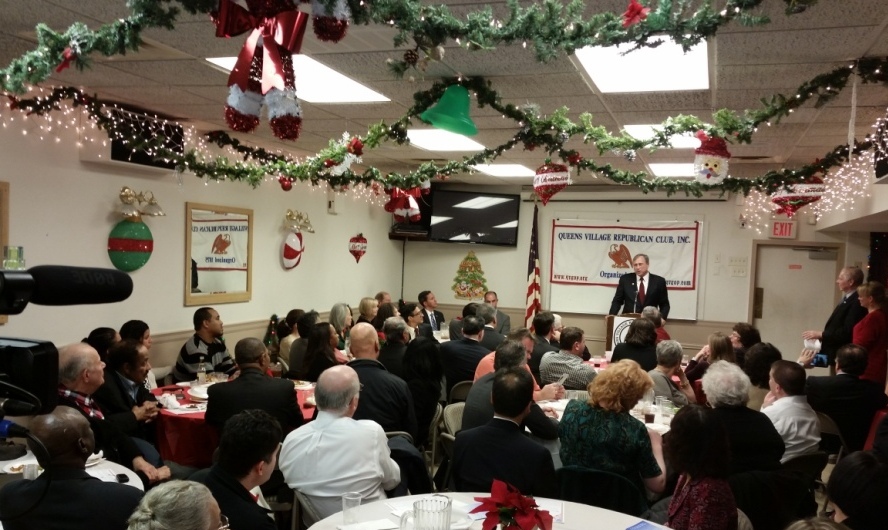 Chairman Cox calls for unity to defeat de Blasio in 2017

Chairman Ed Cox, son-in-law to former President Richard Nixon, served as an advisor to the three former Presidents Nixon, Ronald Reagan and George H.W. Bush and helped Nixon to establish a geopolitical relationship with China which dramatically altered the Cold War balance of power in the region. Cox, state GOP chairman since 2009, commented that good things will now be happening in Albany since we won the State Senate in the November elections. But the past four years have been a disaster for the Empire State with the entire state legislature in the hands of Democrats. With the Republican wave that swept the state and the nation, we picked up three additional congressional seats in New York totaling nine congressional seats, the highest number we had in over a decade. These new Republican representatives include Elise Stefanik, the youngest woman ever elected to Congress in history and Lee Zeldin from Suffolk, a veteran with an esteemed record of cutting taxes. 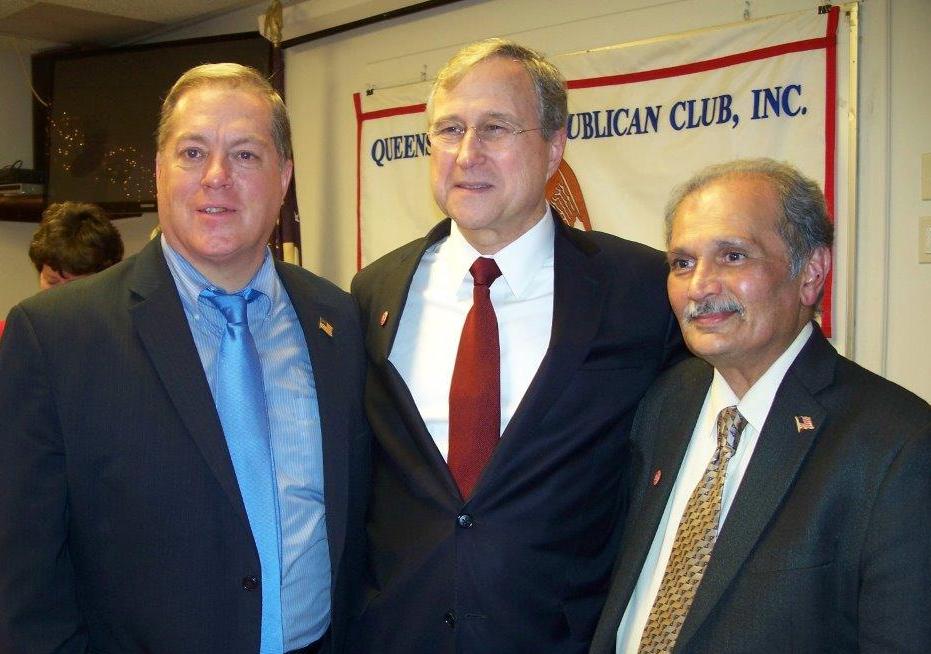 Cox called for unity in our Party in Queens County. A united Party will bring victories in local elections. He predicted that we will win the presidency in a landslide in 2016. But we also need to focus on 2017. After 20 years of Republican leadership in NYC, starting with Giuliani, we saw crime and welfare payouts drastically reduced, and safety, security and prosperity restored, and Bloomberg followed suit. Now with Mayor de Blasio’s progressive agenda, we are seeing the return of crime, chaos, huge deficits, entitlement expansion, and financial irresponsibility. We need to defeat de Blasio in 2017, and for that our Party must unite!

New 2015 QVGOP Club Officers and Board of Directors

The usual Club business was suspended, except for the floor vote on the new slate of Club officers proposed by the Nominating Committee. Committee Chairman and new Club Vice President, Joseph Concannon conducted the vote for the new slate, which was approved without opposition.

Toy Drive and Spirit of Giving 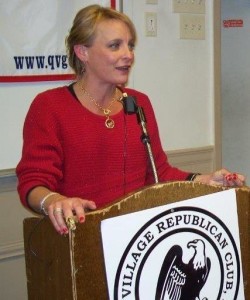 Coordinating with Captain Manson and Police Officer O’Toole of the 104 Precinct, Toy Drive organizer, Janet Maderik was overwhelmed by the outpouring of love and generosity. In addition to three large bags full of toys collected, including everything from Teddy Bears to Super 3-D Dartboards, cash donations came pouring in from nearly everyone present, in order to purchase more toys to help these kids have a joyous and magical Christmas! This spread to the custodial staff of the Knights of Columbus who refused their accustomed gratuities in the spirit of giving the Knights are known for. QVGOP Republicans have now cemented their reputation as generous, caring and benevolent people as well. 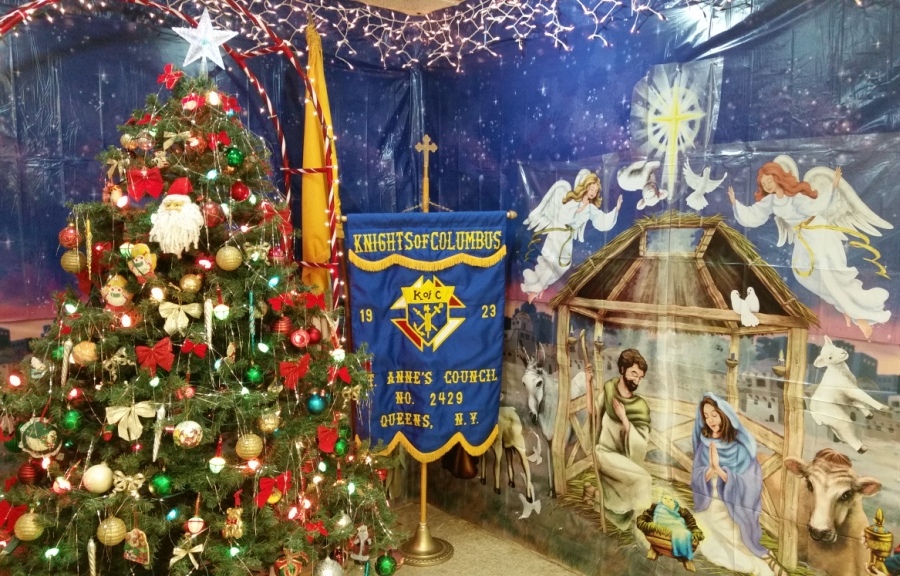