I want to wish a happy, healthy and prosperous New Year to each of you and to the Republican Party! To make a fresh start at the beginning of the year, it’s important to repeat our mission statement as it appears in part on our website www.qvgop.org:

“The objectives of the Queens Village Republican Club are to promote the principles and purposes of the Republican Party, the civic welfare of the community, and to endorse and elect Republican candidates at the local, state and national levels.”

Lt. Col. Allen West, former Congressman from South Florida who was keynote speaker at our past Lincoln Dinner put it this way: “As the oldest GOP club in America, it is your duty to carry the torch for the Republican Party and its core principles for the whole nation.”

We have truly lofty goals to set for our club. The beginning of the year is the time to do it. It’s also the time to reflect on our own lives and make our resolutions for the new year. It’s an opportunity for each of us to begin anew and make a fresh start. I hope everyone makes serious resolutions and sets goals for themselves in the new year.

This is going to be an amazing year! Donald Trump is President of the United States and the nightmare of the last eight years is finally over. He was elected president against all odds, opinions and prognostications. He faced overwhelming obstacles to his victory from a nation in chaos, further divided into hostile factions by his predecessor. Nearly all institutions in America, the media, pundits, entertainers, academia, the Democrats, even some elite Republicans and Conservatives, who at first didn’t take him seriously, were all aligned to destroy him and usher in his downfall. But he triumphed over all adversity! 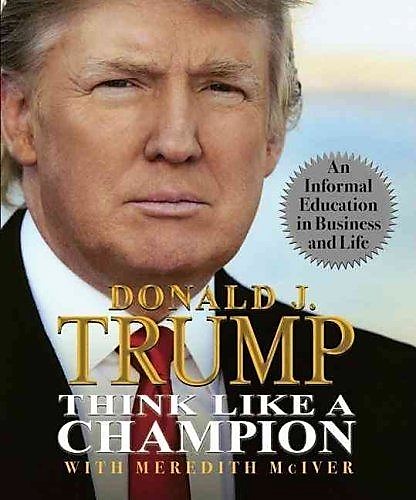 Today, President Trump is still facing the same culprits who will never stop plotting and planning against him, but he will win again and again!  He will triumph, because he is the quintessential positive thinker. He thinks like a champion, and wrote a book of encouraging essays by that name. He is a great leader who “can cut through nonsense quickly and get to the core of things.” He is a shining example to all of us to apply these positive principles to our own lives and succeed in everything we do.

Amazing things are going to happen in our country and in our lives in 2017 because of the leadership of President Trump and his positive approach to life, whether it’s reclaiming millions of lost American jobs, rebuilding our military, defending our borders, protecting our veterans and our police, and making America great again!

Let’s watch him work and learn from him. Let’s support him, let’s advance our country and the Republican Party together with him in this historical year. We can overcome all odds and obstacles in our own life if we are positive and set high goals for ourselves following the lead of our President. No one is too old, too young, or has too many impediments to set lofty goals and achieve great things in his or her life! Whether it’s losing weight, overcoming illness, getting married, starting a business, running for public office, electing outstanding men and women of integrity, you can accomplish it, if you set your mind to it, pray hard, and work hard toward your goals. Turn off the flow of negative thoughts in your head, turn up your energy, unleash your greatest potential and achieve your goals!

Let’s set huge goals and achieve great victories in 2017. As president of the club, I have set lofty goals for our organization. The first is for our annual Lincoln Day Dinner to be our biggest and best celebration to date, which will be held on Sunday, March 19th. Last year we had over 300 attendees, and this year we’ll shoot for 500! Please see the enclosed flyer and buy your tickets now to our most exciting gala dinner party event ever!

I also want to welcome 100 new members into our club, more than doubling last year’s new member count of 46. I am also determined to achieve great victories for Republicans to get elected to local offices in this year’s elections. We have our own club vice president, former NYPD Captain, Joe Concannon, who is running for NY City Council in this area in CD #23. Let’s resolve that he wins the election and we can all celebrate the sweetness of victory in November. It’s a fight against the Democratic stronghold of Eastern Queens. But we can overcome all odds, if we set our minds to the challenge of total victory, work hard, campaign hard, pray hard and then we will win. We can accomplish amazing things together in this year of President Donald Trump!