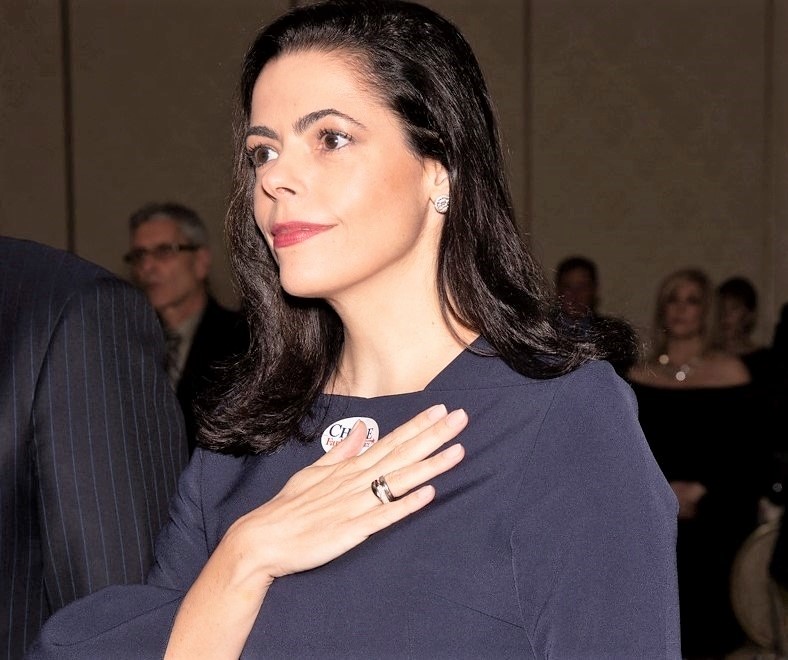 “ I am looking forward to my debate with Senator Gillibrand”,  Chele Farley, the Republican, Conservative, and Reform Party candidate running to unseat New York State U.S. Senate incumbent Democrat Kirsten Gillibrand (2009 – present) in this November’s election, told me last week in an interview conducted in Manhattan.  Farley was referring to the recent announcement that Senator Gillibrand has accepted her request to hold a debate. The debate, which will be aired live on Spectrum stations including NY1, will take place at Skidmore College in upstate New York on Sunday evening, October 21st.

I wasn’t surprised that Farley had chosen to begin the interview by mentioning the debate. For Farley, who holds a Bachelor of Science (BS) and 2 Master Degrees(MS) in industrial  engineering from Stanford University and has worked for the past 28 years in the financial industry in NYC,  a good showing in the debate could change the calculus in this election in her favor.

Several recent independent polls show the Republican challenger trailing Gillibrand by on- average 15%, with 9% listed as undecided. However, a number of my Republican sources have told me they have reason to hope, and a few, albeit a minority of my Democrat sources, have conceded they have reason to worry, that a decisive Farley over Gillibrand triumph in a debate could potentially turn this currently uphill race into a winnable contest for the Republican challenger.

Farley, who together with her husband, Richard, is raising three sons, told me that she has read the same polling data and has heard similar analysis from Democrats, Republicans and independents alike. “I fully understand that the October 21 debate is important to my campaign,” Farley said. “I believe that Senator Gillibrand’s lead can be overcome once voters see the contrast between our positions on issues ranging from Israel, to taxation to President Trump.  I intend to highlight Gillibrand’s flip- flops on immigration and her embrace of radical policies like abolishing ICE {Immigration Customs Enforcement agency}.”

Farley attributed Gillibrand’s turn to the left to the senator’s widely conjectured plan to run for president in 2020- a presidential run the senator has neither denied nor confirmed. “ Senator  Gillibrand is not being honest with voters about her plan to run for president in 2020.  She has moved to the left of her party in order to satisfy the growing radicalism of the national Democratic base”, stated Farley.

When I asked Farley to cite two examples of Gillibrand’s radical policies she plans to bring up in the debate, Farley again referred to Gillibrand’s past statements calling for the elimination of ICE. Noting that ICE was formed in the aftermath of 9/11, Farley stated, “ Senator Gillibrand is the first sitting senator to call for abolishing ICE.  I will ask her how she could justify eliminating an agency charged with counter-terrorism, busting sex-traffickers, and serving as the frontline force against the MS-13 gang on Long Island and elsewhere. Bottom line: Senator Gillibrand ‘s dangerous scheme to abolish ICE would make New Yorkers less safe.”

Farley referred to her earlier statement concerning her opponent’s position on Israel as the second example of Gillibrand’s supposed turn to the extreme left.  Farley, who visited Israel last May and has been a long-time supporter of the Jewish state, said she will use the debate to expose what she contended to be the senator’s transformation from a friend to an antagonist of Israel. “Kirsten Gillibrand turned her back on Israel.  First she supported the disastrous Iran deal. Then she removed her name from the anti- BDS {Boycott, Divestment, and Sanctions movement} legislation after pressure from the anti-Israel left”, stated Farley.

“She’s voted against the Taylor Force Act, a measure which stops US tax dollars from flowing to families of terrorists “, continued Farley as she further criticized Gillibrand’s record on Israel. “Most recently she’s been praised as ‘another one of our people who works on the inside’  by Linda Sarsour, an anti- Israel zealot who has tweeted warmly about the Muslim brotherhood.”

Farley was less passionate, but still critical, when during the final 20 minutes of this 1-hour interview, our discussion shifted from Gillibrand’s stance on national security and foreign policy issues to the Senator’s record representing the citizens of New York State.

The GOP candidate charged that Gillibrand has done little to advocate in the senate for the interests of the citizens of the state, promising to confront her on this supposed failure in the debate. “I will ask Senator Gillibrand to explain exactly what she has gotten done for the people of New York State”, she stated. 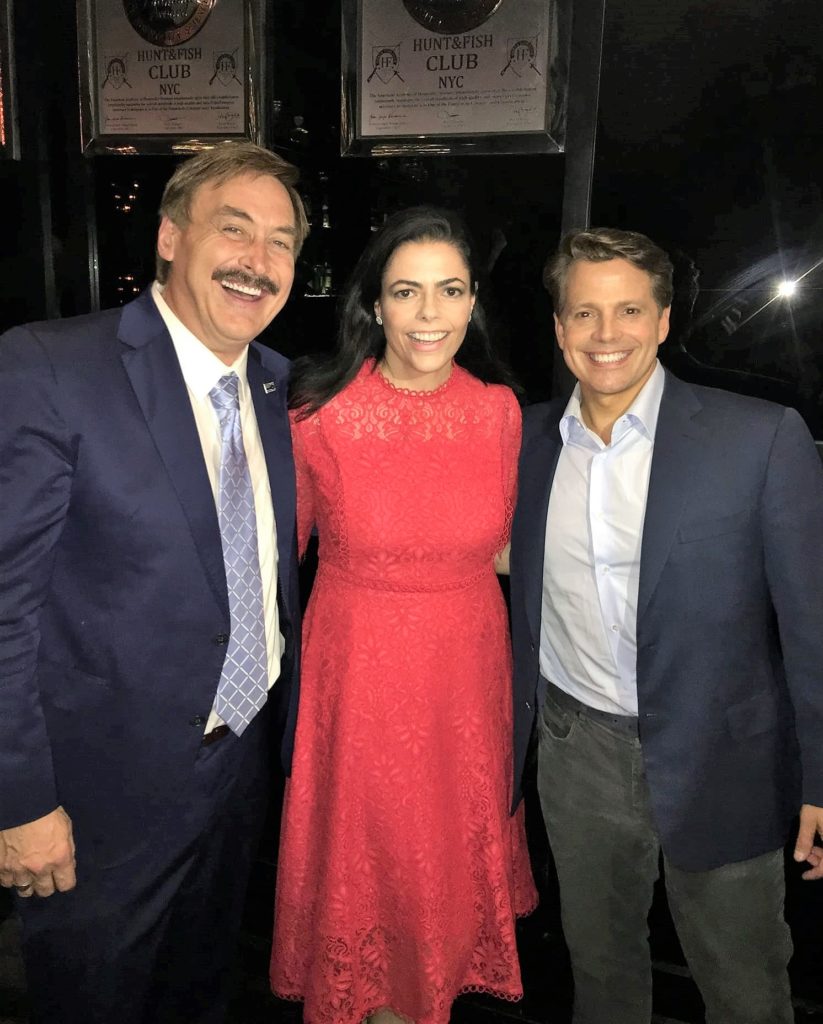 As her first example of Gillibrand’s purported failure to represent the interests of the citizens of the state, Gillibrand cited the disparity between what New York State citizens pay in their taxes to the IRS compared to what they receive in return.”  Kirsten Gillibrand is responsible for Washington insiders taking 48 billion more dollars from our taxpayers than we receive each year”, Farley charged.  “That money could be used here at home to repair our aging infrastructure and {give New Yorkers} lower property taxes. Instead, thanks to Senator Gillibrand’s do-nothing record, our families are overtaxed in Washington to pay for projects in other states.”

Farley also blamed the deteriorating conditions, frequently reported by local, city and state media, confronting the millions of New York State residents who use mass transit on a daily basis on Gillibrand’s alleged laxity in fighting to obtain the funds that New York State is entitled to receive from the federal government. “New York {State} gets shortchanged on mass transit funding too” she said.  “Our state has 40 percent of riders {in the nation} yet receives less than 16 percent of federal transportation funding.  Gillibrand hasn’t lifted a finger to address the disparity. Meanwhile the current on-time performance of the Long Island Railroad is its worst in nearly two decades and the [NYC] subway is plagued by delays and deferred maintenance.”

Farley also charged that Gillibrand has failed to take any action to address the rising costs of   rents paid by tenants in New York City.  Noting that from 2010-2018 – a time frame, she quickly pointed- out, that coincided with Gillibrand’s tenure in office- rents have increased by a historically high 31%.  “Senator Gillibrand has failed to provide financial relief to these beleaguered tenants. This means they can’t save for a down payment on a house or pay off their student loans.  The high cost of housing is putting the American dream out of reach for a generation of New Yorkers”, contended Farley.

Farley informed me that she has developed her own plan, which she promised to introduce as her first senate bill if she is victorious this fall, to assist these NYC tenants.  She explained that through her proposal which she has named the, “Rent Relief Plan”, tenants would be allowed   to deduct their monthly rent from their federal taxes, – just as homeowners, she believes rightly, have long been allowed to deduct their monthly mortgage interest payments. Farley contended that this proposal would put more money in the hands of renters.  “Under my plan, renters would save up to 36,000 dollars a year on their income taxes”, she stated “ That’s  up to 3,000 dollars a month not paid to Uncle Sam.  At the same time, I want to double the cap from 10,000 dollars to 20,000 dollars on the state and local deduction.”

Farley linked Gillibrand’s failure to represent the interests of citizens of the empire state with her inability to pass legislation in the senate.  “Senator Gillibrand has gotten only one bill passed for the people of the state since she was hired for the job: legislation to rename a post office”, Farley said.  “Does this sound like someone working for you or looking out for herself?  I can’t wait to ask her that question, along with the other issues we discussed today, during our debate.”

You will have a chance to hear Senator Gillibrand’s answer that, and other of Farley’s questions, on October 21st.

Robert Golomb is a nationally and internationally published columnist. Mail him at MrBob347aol.com and follow him on Twitter@RobertGolomb

« PreviousThe Doomsday Clock
Next »Real Representation for our Community