A Few Words in Praise of the NYPD

A Few Words in Praise of the NYPD 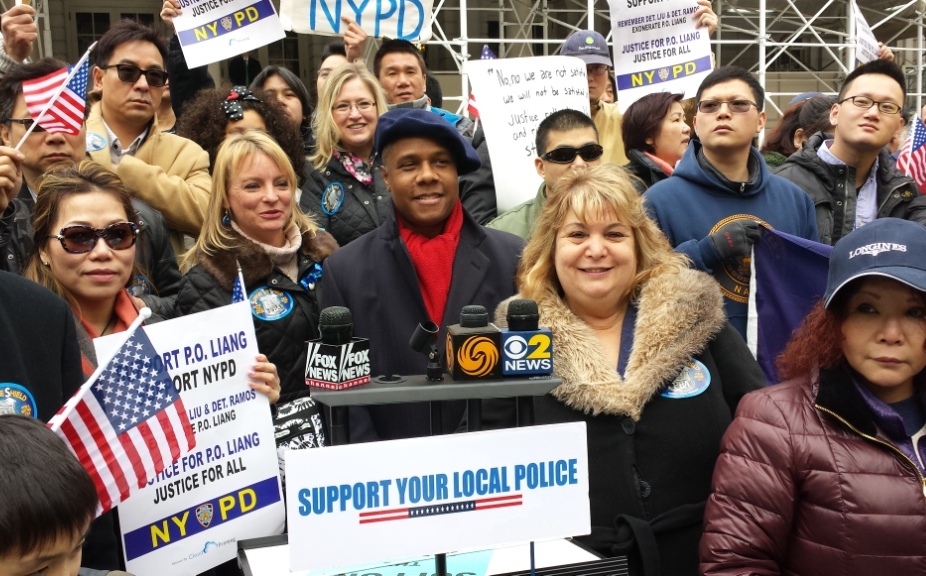 This past Sunday afternoon, I had the honor of addressing a rally in support of New York City police officers in Manhattan. Several other speakers and I joined some 300 people on the steps of New York City Hall at the invitation of former NYPD captain John Concannon and Queens Village Republican Club president Phil Orenstein.

In the wake of last fall’s vitriolic verbal attacks on “racist killer cops,” and the resulting assassinations of NYPD detectives Wenjian Liu and Rafael Ramos last December, Concannon and Orenstein organized five rallies — one in each of Gotham’s boroughs — to express public appreciation for the NYPD and other law enforcement officers nationwide. Sunday’s was the last gathering of this initial series, although more such events will surely follow further down the line. 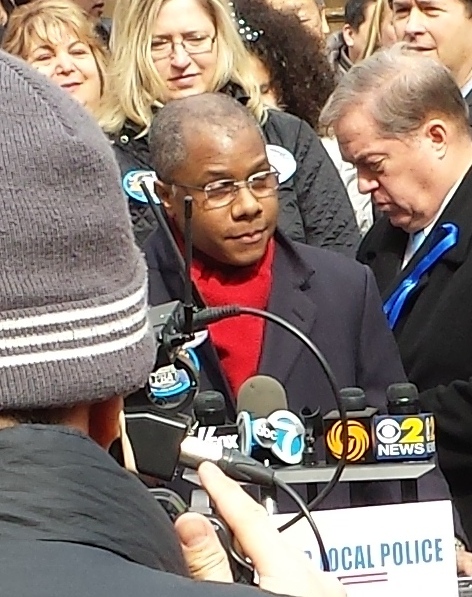 In my remarks, duplicated below, I mentioned that the NYPD’s pro-active “broken windows” policing has so far prevented 26,782 murders. This statistic demonstrates what would have happened, ceteris paribus, if the 1,927 homicides that killers perpetrated in 1993 had continued at that level until last year. From that hypothetical total of 40,467 — from the start of broken windows in 1994 through 2014 — I subtracted the much lower actual number, 13,685. (My detailed calculations are here.)

In short, Giuliani and Bratton first repaired the smaller “broken windows,” such as public urination, graffiti, and turnstile jumping. This largely prevented the “bigger windows” from breaking via robbery, assault, rape, and murder. The NYPD discovered that many of those busted for smaller violations also committed graver crimes. Some hoodlums nabbed while trying to sneak onto the subway, for example, also sported arrest warrants for gun crimes and other violent offenses.

This strategy made New York’s legendary mayhem a thing of the past. As rampant crime vanished in the rear-view mirror, New York enjoyed a commercial, cultural, and tourist renaissance under Giuliani and his successor, Michael Bloomberg.

Whether this civic miracle can withstand the anti-police rhetoric and soft-on-crime approach of Mayor Bill de Blasio is the biggest question mark currently hovering over America’s largest metropolis.

The following are my words of appreciation for the men and women who protect my city:

My name is Deroy Murdock. I have lived in New York City since I moved here from Los Angeles, California in 1987. Three years after I arrived, as crime devastated our city, 2,262 people were murdered in New York. If that era’s homicide rate had continued, I estimate that almost 27,000 more New Yorkers would have been killed between 1994 and 2014. And most of them would have been poor people in minority neighborhoods, not wealthy people in doorman buildings.

Thanks to the New York Police Department’s robust and active crime-fighting strategies, and the hard work and sacrifice of its uniformed officers, the NYPD sent robbers, rapists, and murderers where they belong: In jail.

Law-abiding New Yorkers won our city back from the thugs and killers who preyed upon us. ​Thanks to “broken windows” policing, major crimes are down 75 percent from 1993 through 2014, and murder has plunged 83 percent.

And those who benefited the most from these wise and just strategies do not live in Gramercy Park or overlook Lincoln Center. Instead, they live in now-safe areas like Long Island City in Queens, and walk peacefully past places like the Apollo Theater in Harlem. And for that, I and millions of other New Yorkers say to the NYPD: Thank You!

With crime now a much smaller problem than it was 20 years ago, this city has thrived. Tourists, young people, filmmakers, and entrepreneurs have poured in to enjoy a safer, cleaner, and more elegant city — largely thanks to the diligence of the NYPD.

The NYPD believes that all lives matter. That is why its Counterterrorism Unit works around the clock here and in London, Paris, Tel Aviv, and other cities overseas. These brave, dedicated professionals hunt down and shut down deadly plots by ISIS, al-Qaeda, and other Islamofascists who want to butcher you, and me, and everyone else we know and love in our wonderful city.

From a plot to bomb the Herald Square subway station to a plan to blast the jet-fuel pipelines at JFK Airport, the NYPD has unraveled at least 15 terrorist conspiracies since September 11, 2001. Just 11 days ago — on February 25 — the NYPD arrested three Brooklyn men who conspired to fly to Syria, join ISIS, and receive terrorism training. The police also report that these militant Muslims wanted to “plant a bomb on Coney Island” and “execute” Obama.

In this and numerous other cases, the NYPD’s relentless Counterterrorism Unit has stopped the mass murders of New Yorkers who happen to be white, Hispanic, Asian, and — yes — black. So, for preventing dozens, hundreds, or even thousands of violent deaths at the hands of radical Islamic terrorists, I say to the NYPD: Thank you very, very much! ​

In conclusion, I notice that some people find it really easy these days to slam the cops and hammer them for many things for which they are totally blameless — such as “centuries of racism.” And yet, whether it’s an average taxpayer, an elected official, or a vastly overexposed racial agitator, when things get really scary and people need serious help, right now, what are the three words that you hear them say, over and over again?

Thank you very much!