The Deadly Scandal at NYCHA

The Deadly Scandal at NYCHA

The United States Declaration of Independence guarantees every American the “Right to life, liberty and the pursuit of happiness.”  Tell that to the more than four hundred thousand mostly poor and working- class tenants of New York City Housing Authority buildings, many of whom live in apartments containing dangerous levels of exposure to lead paint poisoning. 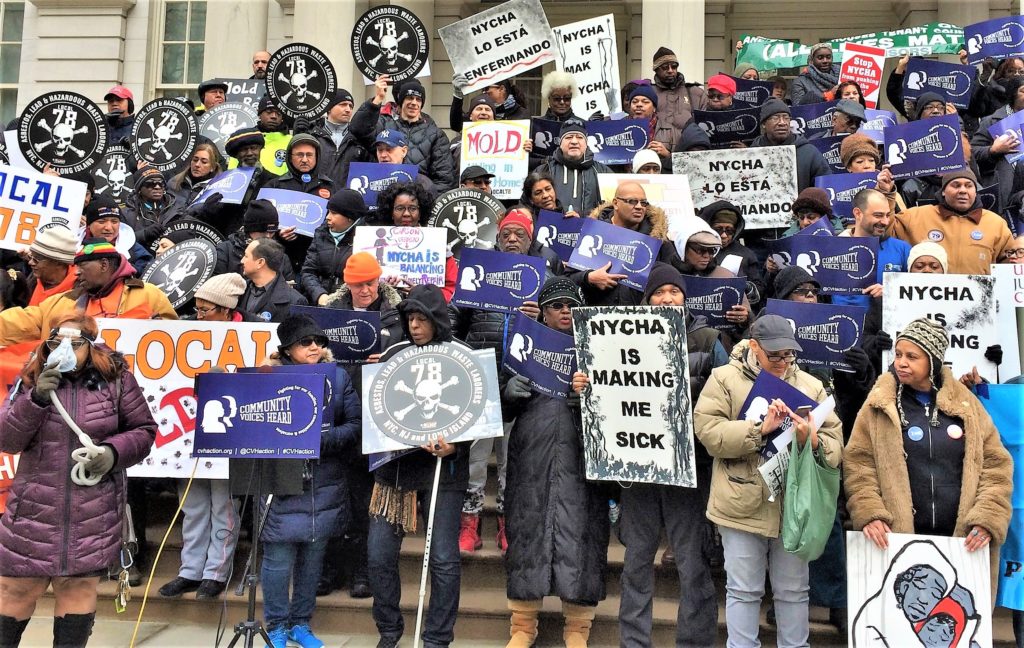 Such exposure, medical research has found, can cause severe medical problems across all age groups. A woman’s exposure to lead paint during pregnancy has been proven to be among the greatest risk factors for the premature birth of their newborns; a child’s exposure to lead paint poisoning from their infancy to the age of 6 has been shown to be linked to lower mental and  physical development and impulse control problems,  sometimes leading later to failure in school and even violent criminal activity;  an adult’s exposure to it increases the chances that he or she will suffer from high blood pressure, joint and muscle discomfort and memory loss.  For people of all ages, extremely high levels of such exposure can result in death.

This, though, is far from a new problem, for the dangers associated with lead paint poisoning exposure for people residing in all public as well as private housing units built prior to 1978 (the year that the use of lead paint, the most common cause of lead poisoning, became prohibited by federal law in all newly built private and public housing) have been known by physicians, other health care providers and scientific researchers for years prior to 1978.

However, there had been few reported public outcries blaming elected officials or their appointed health and housing commissioners for not solving the problem. Rather, most were seemingly given the benefit of the doubt by the media and the public, which, realizing that most public housing units were built before 1978, viewed lead paint poisoning as a health concern, rather than as a political issue.

Yet, as was documented in an 80- page complaint which was issued recently by the United States Attorney of the Southern District of New York Geoffrey Berman against the New York City Housing Authority (NYCHA), there is sadly a highly political component intertwined with the health issue of exposure to lead paint poisoning.  Politics, of course, is not a vice, and many politicians are virtuous. But as Berman made clear in his report, which came after a 2- year investigation, the political environment surrounding the running of the NYCHA under the watch of both the current Mayor Bill de Blasio and his predecessor Michael Bloomberg became a breeding ground for deception and corruption.

That deception and corruption, detailed by Berman in the complaint, involved a systematic scheme in which NYCHA officials actually instructed their staff on how to hide signs of lead paint exposure from U.S. Department of Housing and Urban Development (HUD) investigators during their yearly inspections of city public housing sites. More disheartening still, as Berman was aware from the outset of the investigation, this scandal actually went to the top of NYCHA chain of command- to now former NYCHA chairwoman, Shola Olatoye.

Appointed to her position by Mayor de Blasio 4 years ago, Olatoye had prior to 2016 been the subject of an investigation from the New York City Department of Investigation (DOI), which later formed the basis of Berman’s federal complaint.  The DOI investigation culminated this past April with a report that found that Olatoye had on several occasions issued false reports to HUD, citing dates and times of NYCHA inspections, while knowing such purported inspections had never occurred. It came as little surprise, but no help to the tenants who were the victims of her deceit, that she resigned from her position at NYCHA shortly following the release of the DOI report. It did come as a surprise to many NYCHA tenants and some in media that Mayor de Blasio refused to acknowledge the harm that she had caused to the residents of NYCHA by falsifying reports about lead inspections.  But the lies did not end here.

The plot to deceive federal inspectors, Berman also found, was not restricted to covering up lead paint exposure which is the most lethal, but far from the only health hazard faced by families living in public housing.  He discovered that through a “Quick Fix Tips” list they covertly developed, NYCHA officials instructed their managers, mechanics and other staff on how to hide other serious health and safety related hazards-  including roach and rodent infestations, infectious molds, malfunctioning elevators, water leaks and heating outages- from federal housing inspectors.

Fortunately for the beleaguered tenants of the NYCHA, the daily ordeal of living under these horrid conditions appears to have ended along with the corruption that caused it.  With Berman’s report staring them in the face, NYCHA officials had no option but to accept responsibility for their unspeakable conduct and agree to sign a federal consent decree as part of a legal settlement with the federal government.  Losing their former autonomy over public housing, NYCHA will now under the provisions of the decree have to answer to a court appointed monitor. With that, the days of NYCHA tenants being deprived of basic services due to false reporting by NYCHA officials have seemingly ended.

NYC tenants will also benefit from the financial obligation that the decree placed on New York City, separate and apart from NYCHA.  Found by Berman to be critically underfunding public housing, NYC under the decree must allocate from the city’s budget an additional $ 2.2 billion dollars to NYCHA- a believed significant but undisclosed amount of which will go to pay for the damages awarded to 19 children who incurred serious medical damage due to their exposure to lead poisoning.  NYCHA also agreed to pay $ 200 million for a minimum of one year after. With that, the days of NYCHA tenants being deprived of basic services due to the frugality of the NYC government elected officials have seemingly ended.

Still the harm already suffered by many tenants cannot be undone. The monetary settlement given to the 19 children who were the victims of lead paint poisoning cannot, of course, restore  their health to them.  And tragically they might well be just a small percentage of the actual number of the victims.  According to the finding of Berman’s investigation, there are likely to be many more children suffering from exposure to lead paint poison who remain undiagnosed because, due to the cover up of NYCHA officials, they were never tested for it.

If somehow these officials who perpetuated this horrible deceit are still able to sleep at night, that might end if Berman, as he suggested he is considering, files criminal charges against them.

There are two reasons why Mayor de Blasio, who has a long record of missing public events due to oversleeping, has probably not allowed the harm caused to these children to interfere with his own sleep.  For one, he knows that he himself does not face criminal charges concerning the scandals at NYCHA, for indifference to the suffering of the citizens he swore to serve is not a crime.

Secondly, de Blasio has seemingly exonerated himself from his own moral and political responsibility in this scandal, instead placing the blame on the state and federal governments for what he claimed were their “decades of divestments” in the NYCHA.  However, upon hearing de Blasio’s claims, Berman responded that it was not the feds or the state who bore the blame but rather the cause was that NYCHA was “a dysfunctional operation … fundamentally flawed and engaged in a culture of false statements and concealment.”

Thankfully for the good men, women and children living in NYCHA buildings, Geoffrey Berman has finally ended that sorrowful culture.