Silence is Loss of Freedom, Liberty and Life

Silence is Loss of Freedom, Liberty and Life

By Phil Orenstein and Jerry Matacotta

The “liberal” Democrat Party has been taken over by the Taliban Marxists who do not subscribe to the rule of law and classical liberal values which form the founding principles of America. This Marxist movement is not unlike the Taliban’s cultural genocide and destruction of ancient art and statues, burning books, and outlawing music, as the fulfillment of Koranic law to cleanse pre-Islamic culture and history of forbidden representations of living things.

American founding principles and classical liberal thought were based upon the Age of Enlightenment heritage of reason and individual liberty which laid the groundwork for our Declaration of Independence, Constitution, and Bill of Rights.

The people of America are all immigrants of every race, religion, and national origin, with equal and unlimited opportunities protected under the law, for all to pursue the American Dream and unleash their greatest potential, and these are the basic principles that keep us functioning as a nation. This is the glue that keeps us together.

We’ve had our differences of opinion regarding policy throughout our history, as expressed by the broad diversity of such political parties as Democrat, Republican, Independence, Conservative, Libertarian, Whig, Federalist, and so on since our founding. But all these diverse political parties, ideas and philosophies subscribed to our basic belief in reason from the Enlightenment, the rule of law, and were bound by our Constitution and the founding principles of America.

Our historical heroes from George Washington, Thomas Jefferson, Alexander Hamilton, Abraham Lincoln, Frederick Douglass, Teddy Roosevelt, Franklin Delano Roosevelt, to Martin Luther King, belonged to various political parties, but all believed in America, our founding principles and were embraced as our greatest American heroes. Their heroism came from their faith, courage and steadfast belief in freedom and the principles of America. Their heroic stature represents the very spirit of America.

In stark contrast to America and our founding principles have been the distinct ideological opposites of the Russian Revolution of 1917 led by Lenin, Adolf Hitler’s Nazi takeover of Germany in 1933, and Mao’s Cultural Revolution of 1967. The socialist devastation of Cuba and Venezuela followed the same Marxist playbook, starting with tearing down statues, destroying books and rampant censorship.

Venezuelans have been sounding a warning cry. An activist recalled the peaceful days growing up in Venezuela, when no one believed the destruction their democratic nation, once the wealthiest country in Latin America, would follow in the wake of the actions of strongman Hugo Chavez tearing down historical statues and changing street names to eradicate their country’s history and identity and usher in socialism. Then came the changes in school curriculum, censorship of the press, movies, museums, and religious symbols, and trashing books to pave the way to the present dictatorship on the brink of collapse where 94% of Venezuelans live in wretched poverty.

They believe in an authoritarian society based on censorship and the destruction of history, where alternate views are forbidden. They silence any opinions that are not in accordance with their rigid narrative from the pages of their “Little Red Book.” Under Mao’s Cultural Revolution, this narrative was the only thought allowed. They silence and crush anyone with a different view. High on the thrill of revolution, they systematically destroy every remnant of the wicked past before they can usher in their life-destroying revolutionary state.

Does all this sound familiar to the tactics of Black Lives Matter, Antifa and the revolutionary communist groups that make up the woke mob tearing our country apart?

My question is, where are the “liberal” historians who up until three months ago were defending America and our national heroes? Where is Harold Holzer, one of the nation’s leading authorities on Abraham Lincoln, as the mob rages against Lincoln statues? Where is Steven Spielberg who’s widely acclaimed film, Lincoln recounts the full measure of President Lincoln’s passion, humanity, and political skill to end the Civil War and permanently abolish slavery through the 13th Amendment? Where is Theodore Roosevelt and Woodrow Wilson scholar, Patricia O’Toole, noticeably absent from the recent “Save Teddy” rally at the American Museum of Natural History? Where are Jefferson scholars Peter Onuf and Annette Gordon-Reed, as Thomas Jefferson statues are being torn down and vandalized? Where is Jon Meacham, author of the Pulitzer Prize-winning book on Andrew Jackson, as protesters recently targeted the Andrew Jackson statue in Lafayette Square? 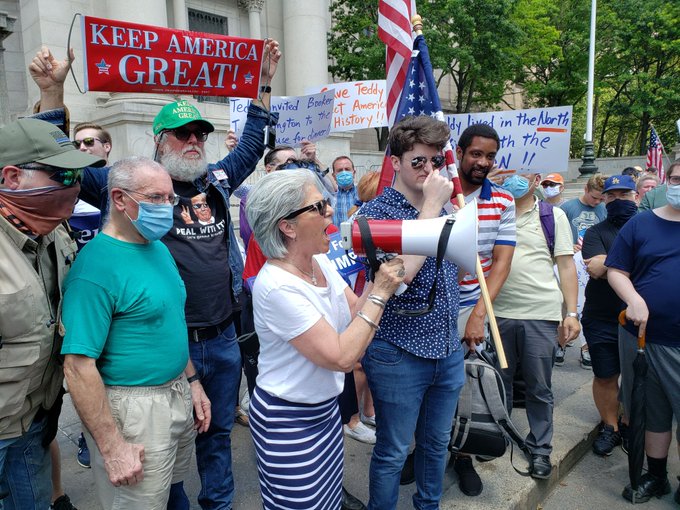 Vickie Paladino, President of the Whitestone Republican Club, spoke at rally to Save Teddy Roosevelt’s statue, in front of the American Museum of Natural History on Sunday June 28th. Photo: Phil Orenstein

Credit is due to those precious few historians and leading public figures who have spoken out amid the woke backlash, like Civil War and Lincoln scholars, Allen C. Guelzo and James Hankins, who explained the historical truth behind the origins of the Emancipation Memorial, the statue of Lincoln and a freed slave in Washington D.C., targeted for removal. A handful of others have boldly spoken out against the rule of the mob, including Archbishop Carlo Maria Vigano and Goya Foods CEO Robert Unanue, who defended President Trump and American values and were vilified for it. A group of brave frontline doctors spoke out on Capitol Hill challenging the so-called accepted dogma on Covid and Hydroxychloriquine, and the video quickly went viral to millions of viewers, before they were summarily censored and cancelled by Google, YouTube, Facebook, Twitter and all rest.

But where are all the others? Where are the multitude of leading voices?

Where are the artists, playwrights, writers, journalists who believe in and thrive on our “liberal” values of logic, reason and free speech, free expression, free press, and freedom from government censorship and repression? Where are our eminent religious leaders, now that the wrath of the mob has turned against our religious liberties, burning down and vandalizing our historic churches and religious statues throughout the country? Anarchists burned Bibles in front of the federal courthouse in Portland, Oregon. Where are the voices of our political leaders especially our representatives in Congress, speaking out for our embattled law enforcement personnel and for preserving our American way of life, when it is being torn asunder all around us? Where are their voices?

Logic, reason, and critical thinking have always been our building blocks. One of the most basic principles that was built into the moral fabric of our country, was the maxim that although we disagreed, we protected and defended each other’s right to express differences of opinion. However, if you say anything about BLM, that is contrary to the woke doctrine, all logic and reason is thrown out the window. If you say “All Lives Matter” or any opinion at odds with their Little Red Book, you could be vilified, shamed, and cancelled, lose your job, lose you circle of friends, and your personal safety and security could be at stake.

After our statues and monuments are torn down, next they will come after our books. The final step of the Russian Revolution, Nazi takeover, the Cultural Revolution, and all the others, after the book burning, confiscation of firearms, purges from jobs and social circles, was the people losing their lives.

We always think, as Americans, things like this can never happen here. We are just like our innocent and naïve friends from Venezuela who never believed the ruin of their prosperous country could ever happen. It can happen in Germany, Russia, China, Cambodia, and Cuba, but never here in America.

But if good people don’t speak up, it can happen here just as easily as any other country which succumbed to tyranny and went hurtling down the road to genocide. The worse crime that Americans can commit is to be silent, because if you’re silent, evil will take over and you’ll lose your freedom and even your life. The oft-quoted Edmund Burke said, “The only thing necessary for the triumph of evil is for good men to do nothing.”

Black Lives Matter is a Marxist movement intent on creating chaos and upheaval to overthrow our government and destroy America. If you don’t agree with them, you are sub-human. But the vast majority of Americans don’t believe in their agenda. Are we that afraid as a nation to stand up to them?

Everyone must stand up, speak out and be not afraid. You’re an American. When you stand up for our country and declare “all American lives matter,” you’re not a bad person. You’re not a racist, sexist, or homophobe. If we remain silent, and don’t get out to vote in November for President Trump and Republicans in massive numbers, and spread the word to our family and friends, the next step will be book burning. After that will be taking people’s lives.

This election is not about Trump vs. Biden. It’s about stopping a political party and lawless mob from turning America into a socialist country and destroying our American way of life. Most Americans view the violent anti-police protesters as criminals and abhor the radical agenda of BLM, Antifa and the lawless mob. The vast majority of Americans of all races are against defunding the police. Never be silent. All good people must stand up to save America.

Phil Orenstein is the president of the Queens Village Republican Club. Established in 1875, it is America’s oldest Republican Club.  www.QVGOP.org   Historian, Jerry Matacotta, founder of History Seminar Series at Queensborough Community College was the advisor for this article.