A shelter belongs on billionaires’ row

A shelter belongs on billionaires’ row 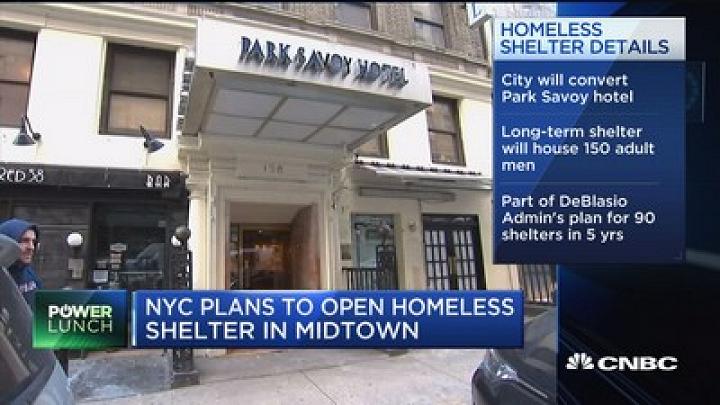 Mayor de Blasio announced plans last week to place a homeless shelter on Manhattan’s “Billionaires’ Row” just south of Central Park. The shelter, which will house 150 single adult men, will be located in the former Park Savoy hotel at 158 W. 58th St., a block from the Ritz Carlton and abutting New York’s priciest luxury apartment building, the $1.5 billion One57 on W. 57th St. The penthouse there sold for $100.5 million three years ago, the highest tab ever for an apartment in the city.

Some of my fellow conservatives are upset about this, but I think it’s great. And it illustrates why I sometimes find radicals like de Blasio and Bernie Sanders to be more palatable, or at least less hypocritical, than are most liberals.

To be fair, frequently de Blasio acts like one of these more typical liberals, though. For example, he has been trying since taking office in 2014 to ram other homeless shelters down the throats of working- and lower-middle-class outer-borough communities (typically Asian and white, but not infrequently black and Hispanic as well) like Elmhurst, Maspeth and Corona, Queens, and Sunset Park, Brooklyn.

These proposals reprise the same pattern that has played out in New York and other cities since patrician Upper East Side Mayor John Lindsay tried to build a low-income housing project in the middle-class Queens neighborhood of Forest Hills in the early 1970s.

The outrage and hopelessness that those in working- and middle-class areas feel when these projects are slated for their neighborhoods is not just about the real threats to safety, quality of life and property values that can occur without adequate screening and security measures. It’s also about the manifest unfairness and hypocrisy when affluent liberals pompously lecture these communities about their “racism” but would never dream of locating such facilities in their own privileged neighborhoods.

As a cab driver once said to me, “I’ll support low-income housing when they put it next to the Kennedys.”

I don’t know if any Kennedys actually live on W. 58th St., but with his Billionaires’ Row plan, to his credit, de Blasio has, at least this one time, tried to address this sense of injustice.

Of course, there are arguments that homeless shelters don’t belong in any residential areas, but only in commercial and industrial sections. But if they are to be there at all, then all communities should share equally — including the affluent and wealthy white areas that vote heavily for candidates who support such liberal social policies, but rarely if ever have to bear the impact of the programs they vote for.

Some will say that it’s absurd for the city to rent prime Manhattan real estate for a homeless shelter when it could provide emergency housing for a lot less money in less ritzy neighborhoods like Maspeth or Sunset Park. And in a strictly economic sense, it is absurd.

But by this logic, all government housing would be in the least expensive — i.e., the poorest, and most heavily minority — areas. That would indeed be the most cost-effective way to provide housing for the poor and homeless, and it was thus the way that well-meaning progressives did try to provide it from the 1920s to the 1970s.

But liberal courts ruled that this was racially discriminatory, as it perpetuated segregation.

Therefore, government has to spend more money than is economically rational in order to spread the burden upward to middle-class Asian and white (and black and Hispanic) areas.

When the people in these impacted neighborhoods say, “OK, but then lets spread it up a little more, also,” to, say, W. 58th St. and other affluent areas, the response is “Oh no, that would be economically irrational.”

You can’t blame the middle-class guy and gal for failing to understand the legal and fiscal subtleties and just seeing that the result is that they get screwed. And it’s not good for civic health or democracy for an entire class of people to feel, as the lower-middle class in this country has justifiably felt for 45 years, that it always gets the short end of the stick.

So: As long as government has to pay more for Maspeth than for Morrisania, it should occasionally have to pay even more for Manhattan too.

Saffran, @dennisjsaffran, is an attorney and writer in eastern Queens.

« PreviousBe Part of the Great Opposition!
Next »Be Grateful Trump Broke the Overton Window