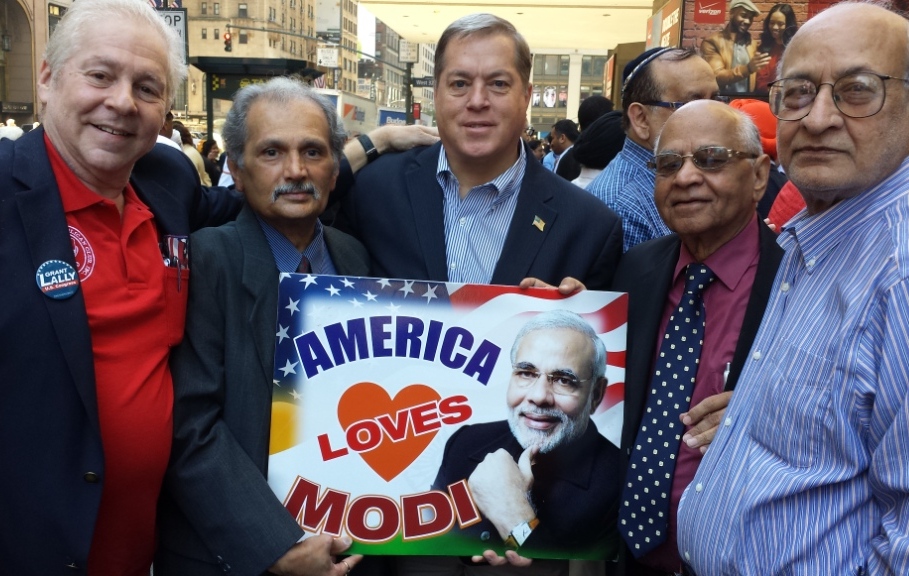 The Queens Village Republican Club president and members were on hand to welcome Shri Narendra Modi, Prime Minister of India, on his maiden visit to the USA. The historic event was billed as the Community Reception for the Prime Minister of India at Madison Square Garden on Sunday, September 28, 2014. Tickets were provided by Dilip Chauhan from the Gujarati Samaj of New York, one of the major Indian American organizations of New York, and celebrating their 40th Anniversary this year. 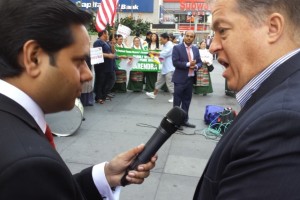 We were greeted by the news cameras of every known Indian news channel under the sun. We spoke to the Indian media about our expectations of seeing a great new leader of the people who we believe fills the void in leadership today on the global stage. We told the Indian media that we are here on behalf of the Republican Party to welcome PM Modi to America, and we also welcome Modi with open arms on behalf of all Americans, and we were met with cheers and chants of “Mo-di, Mo-di, Mo-di” by the throngs surrounding the cameras. 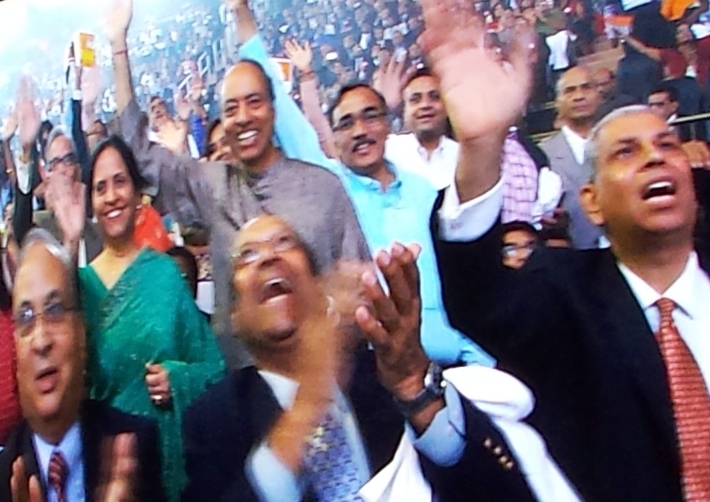 The MSG arena is massive and you had to be there with the audience of 20,000 people to feel the energy and raw power in the room. The culture festival performances included beautiful Gujarati folk dances, Indian singing sensations, live wild stage art, performances from Slumdog Millionaire and more, as it built up and swelled to a crescendo of energy and excitement as Narendra Modi entered the room to unified chants of “Mo-di, Mo-di, Mo-di.” Live-streaming video or photos on social media will not cut it. You had to be there. It was the pure energy of a people and their new leader on the threshold of making the 21st century the “century of India” as the world’s biggest democracy! 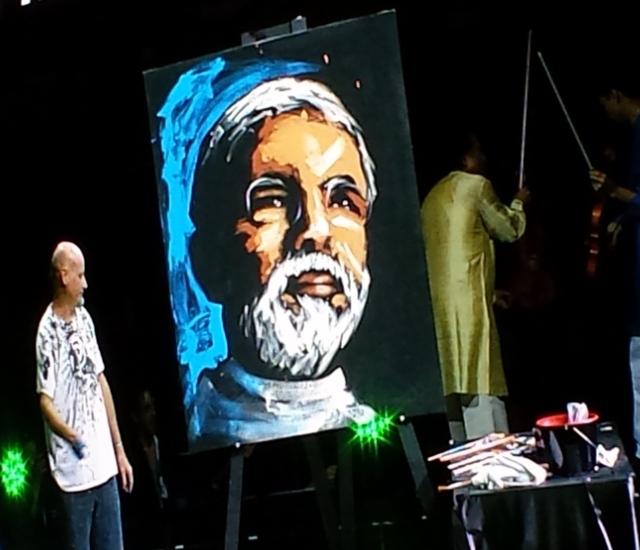 Indian Americans are a kind hearted people with a great legacy to share in their new land they now call home. They emigrated to our soil in order to prosper and achieve their greatest potentials and the American Dream in the land of the free and the home of the brave and the audience chanted “USA, USA, USA” to show their pride. The Gujarati descendents were in attendance in great numbers. They hail from the large historic state in western India which is the leading industrialized state of India as a result of Modi’s stewardship as its Chief Minister. His track record of economic turnaround, propelled him to win the hearts and minds of the Indian populace and ultimately to win the election as Prime Minister. There was a celebration throughout the world when Modi won the election. He campaigned on the BJP Party platform of free market capitalism, the work ethic, limited government, nationalism, self-reliance, social conservatism and strong national defense, similar to the Republican Party in the United States. Like Ronald Reagan, Modi believes in “peace through strength.” 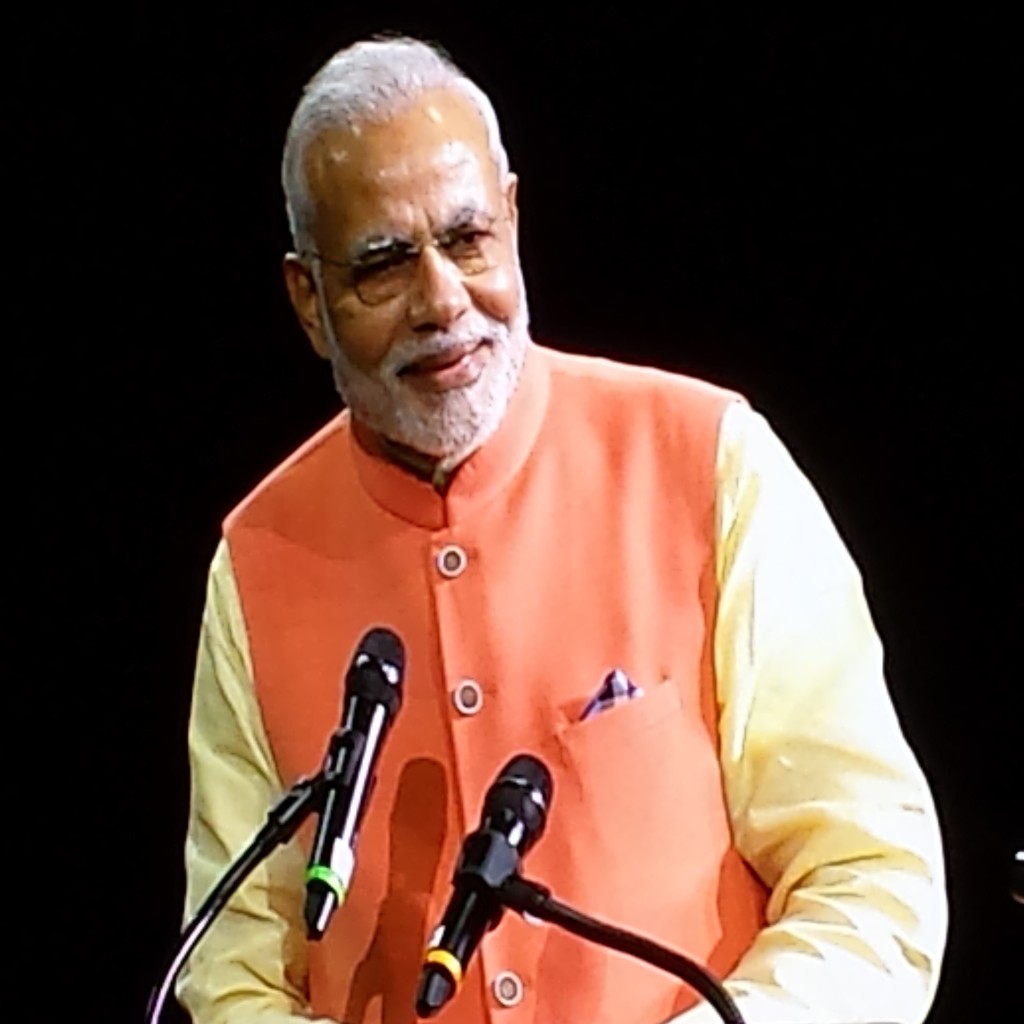 Modi’s spoke for over an hour with all eyes and ears in the arena glued to his every word. He joked and reached the people on their own level and talked about their problems as if it was his own. He is a common man without any hint of pretension or self-righteousness, having walked for miles in their shoes as a humble tea merchant. He talked about daily life issues, housing and cleanliness, and gave the people pride in the magnitude of their Indian heritage. Through the miracles of technology and innovation, no longer will the world look at India as a nation of “snake charmers.”

A great leader is one who lifts the people up and gives them a vision and the means to achieve their objectives. He lifted everyone to participate in a vision based on India’s greater history as both the oldest civilization on earth and the youngest nation with the younger generation making up 65% of the population.

Modi spoke about limiting the size of government by reducing red tape and eliminating obsolete laws. He will be happy to destroy an old law every day. He spoke about the dream of a clean Ganges River in 2019, the 150th anniversary of Mahatma Gandhi. Gandhi gave independence to India, and what will India do for Gandhi, asked Modi? Gandhi’s second quest was cleanliness and the sacred Ganges River is a lifeline to 40% of the Indian people. Cleaning up the polluted river is not only payback to the father of Indian nationalism, but an historic transformation of India to lift the nation out of poverty and improve economic prospects nearly half a billion people. Modi has already directed his government ministers to set an example by taking brooms to the streets to start the campaign of cleanliness themselves. 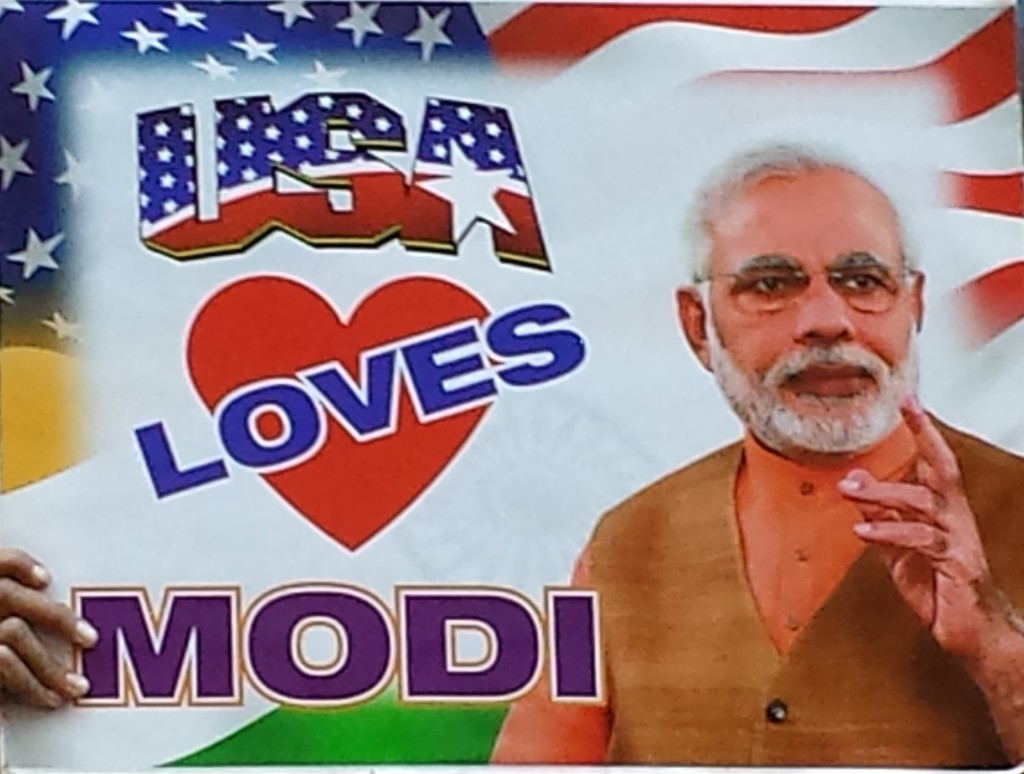 In the spirit and soaring oratory evocative of Dr. Martin Luther King’s I have a dream speech, Modi said “I am going to make an India of your dreams.” The scriptures say that without a vision, the people will perish. Modi conveyed a grand vision of India, just as the great Ronald Reagan gave us pride with the vision of an America that is “a shining city upon a hill whose beacon light guides freedom-loving people everywhere.” We believe that Modi is the Ronald Reagan of India.

« PreviousSpecial Thanks to Sponsors of Grant Lally Fundraiser
Next »Defeat Voter Apathy on Nov 4, 2014