QVGOP hones in on No. 1 issue: safety

QVGOP hones in on No. 1 issue: safety 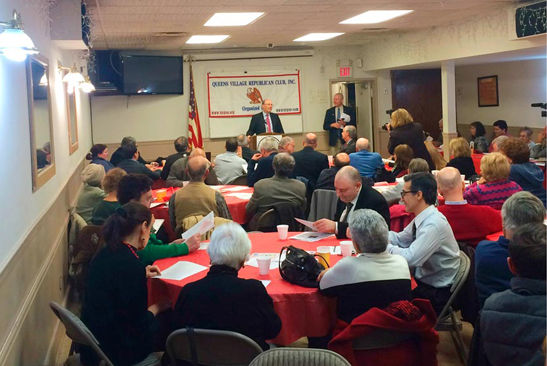 Kenneth Abramowitz had a stern message for the Queens Village Republican Club last Thursday: Western civilization is under attack. The venture capitalist and prominent GOP donor said the threat doesn’t just come from the outside from terror groups like ISIS, but also from within, thanks to a failure in leadership and bad public policies.

He believes the solution is to find politicians who can do three things: Grow the economy, protect people culturally and protect people physically. “It’s actually pretty simple,” he said at the monthly meeting of the Republican Club in Glen Oaks. “And the Republican Party should be the party of simplicity in this way.”

Abramowitz was in Queens along with John LeBoutillier, a Fox News contributor and former U.S. congressman from Long Island, to speak as part of a forum on national security. Philip Orenstein, president of the QVGOP, called that the most important issue facing the United States. “The No. 1 job of our government, of course, is to keep us safe as Americans,” Orenstein said. “And this is a very difficult issue today.”

Abramowitz, who has hosted a fundraising event for Republican presidential candidate U.S. Sen. Ted Cruz (R-Texas) and given national security talks to about a dozen of the Republican presidential candidates, outlined what he calls a “10 Front Attack to Destroy the United States.” This attack, he claims, includes foreign agents embarking on cyber warfare, North Korea’s expanding nuclear capacity and the infiltration of drugs and terrorists across the nation’s border. He also railed against policies like the Iranian nuclear deal, which he called the “biggest mistake since the Trojan War.”

The forum comes about three weeks before the Iowa caucuses, the all-important kickoff to the presidential election. Business mogul Donald Trump has been leading the field of contenders, outpacing more-seasoned candidates, though polls say Cruz edges him out in Iowa.

During the forum, LeBoutillier and Abramowitz talked at length about the broader issues in American politics and the current state of the Republican party. According to Abramowitz, Trump has added some electricity to the GOP, though he admitted he wished that electricity was a little more “polished.” But both he and LeBoutillier pegged Trump and Cruz as the most likely candidates to secure the Republican presidential nomination. “I think it’s basically between the two of them,” Abramowitz said.

Regardless of who is selected to face off against the Democratic nominee, LeBoutillier said the GOP continues to face challenges in its public perception. The former congressman, who served during the Reagan era, said that in recent decades “Republican” has become one of the most negative words in politics, in part, he believes, because the GOP hasn’t done a good enough job selling itself.

He said the party also needs to do a better job working to win over segments of voters who have traditionally made up Democratic strongholds, including black voters. “Work creatively to win over the other side where there are weaknesses. And I don’t see any of it,” he said. “And it’s a shame because we have the right message to sell and we’re not even trying to sell it.”

For Republicans like Abramowitz and LeBoutillier, who said he “can’t stand to think” of Democrats like former Secretary of State Hillary Clinton or U.S. Sen. Bernie Sanders winning the White House, there is a lot riding on the 11 months leading up to the November election. As LeBoutillier put it, the world operates on an axis. And right now, we are off that axis, he said.

“The only way to get it back on is a responsible, good Republican president who can lead all the things Ken talked about,” he said. “If we get that out of these primaries, we will win the election and save the country. If we blow this election, I don’t have a lot of faith.

« Previous“RUBBER ROOM ROMANCE” MAKES ITS DEBUT AT PUBLIC FORUM ON EDUCATION REFORM
Next »Video: The Politics of National Security