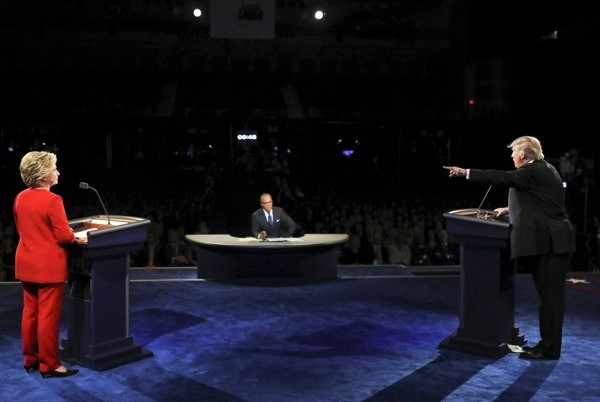 Members and supporters of the Queens Village Republican Club gathered to view the presidential debate between Hillary Clinton and Donald Trump. Photo by Joe Raedle/AP

The Queens Village Republican Club partnered for a watch party with the Nassau County Federation of Republican Women, joining them at the Park City Diner in Garden City, Long Island to enjoy a buffet dinner and cheer on Republican candidate Donald Trump against his opponent, Hillary Clinton.

About 40 people attended the event, according to Queens Village Republican Club President Philip Orenstein. “Everybody was very upbeat for the debate. We were happy to see that Donald Trump brought out the substantial issues about the economy, and about jobs coming back to America,” Orenstein said. “I believe he got across the major issues about our trade deals around the world, and putting our country first.”

The debate was held on the campus of Hofstra University, a mere 15 minute drive from the Park City Diner. The issues covered were wide-ranging, and the debate was moderated by NBC Nightly News host Lester Holt. Though Orenstein was happy with Trump’s performance, he expressed frustration with Holt’s performance.

“My own feeling was Trump had two opponents instead of one and Lester Holt was attacking him on minor things,” he said. “But Trump got his message across.”

The next scheduled debate between Trump and Clinton is scheduled for Oct. 9 at Washington University in St. Louis, MI. It will be moderated by ABC anchor Martha Raddatz and CNN host Anderson Cooper and will be conducted in a town hall format. Orenstein expressed hope that Trump would continue to push a message of economic growth and safety from terrorism.

“He should stress his qualifications as a very successful businessman who can get the job done,” he said.