Opening the Discussion on School Choice and Education Reform

Our February General Club Meeting was billed as a Public Forum on Education Reform, and successfully delivered what was promised to a packed meeting hall about fixing our broken education system and breaking the hold of the teachers union on their government school monopoly. The focus of the meeting was on one of the hottest public policy issues facing parents, teachers, taxpayers and legislators today: School Choice. 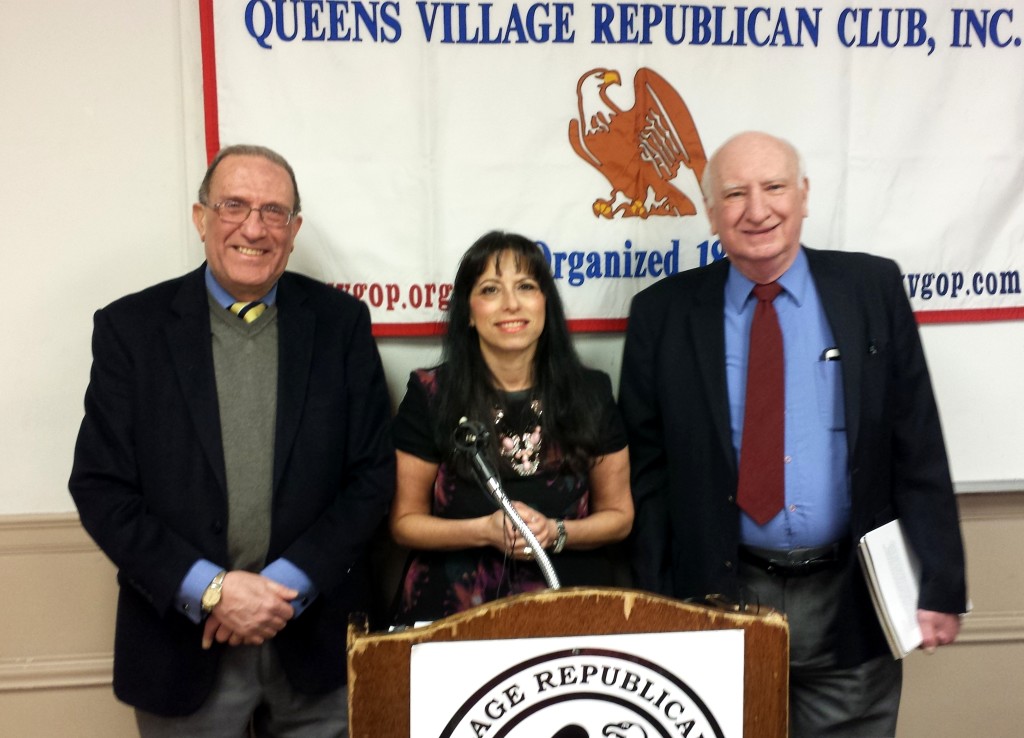 Club Vice President and former City Council candidate, Joe Concannon led the forum, introduced the guest speakers and urged the passage of Assembly Bill #A2551, “education investment incentive act” which provides relief for all taxpayers and benefits teachers, parents and children, most of all poor and minority children.  He stated that as Republicans, we want our kids to have a true quality education.  He introduced the three panelists for the evening:  Frank J. Russo, President of the American Family Association of New York, Dennis Duffy, School Choice advocate, and Cindy Grosz, award winning educator, and author of the new book “Rubber Room Romance” which made its debut at the evening’s forum.

Thanks to James Doukas, who videotaped the meeting at no charge, everyone will be able to view the featured speakers on our website shortly. 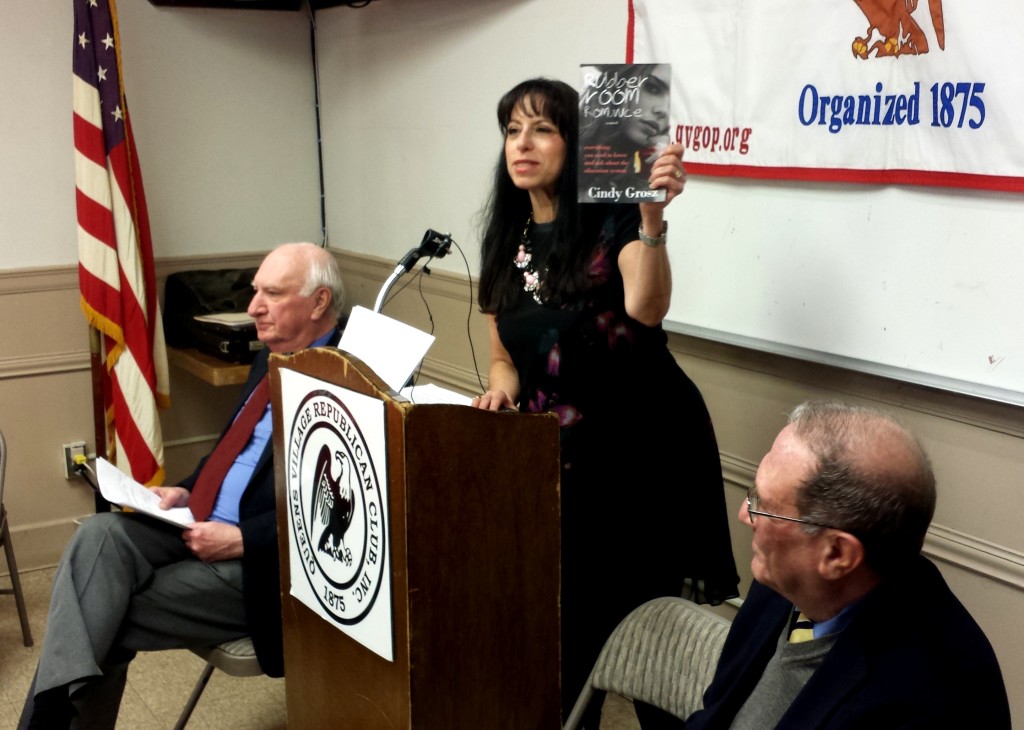 Ms. Grosz is an attractive and engaging person, who explained that her book and talks are about attracting and engaging people in an ongoing discussion about reforming our education system. Republicans especially who believe in the founding ideals of America which created the greatest nation in the history of mankind, need to focus on education policy  issues and the content of our school textbooks which often portray the opposing side of the story regarding America and our constitutional foundation. 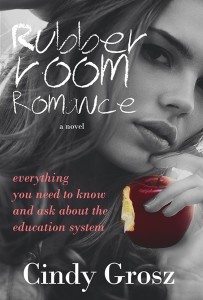 erything you need to know and ask about the education system” addresses the issues of common core, safety and national security, textbook education, corruption within the system and much more. It is a realistic fiction novel that sites 20 topics that discuss what work has to be done to reform education.

She has been involved with work on the content of textbook education to make sure that historical facts and pro-American values are not being distorted and misinterpreted in classrooms nationally. She shared news of breaking legislation, working closely with Assemblyman Brian Curran of Lynbrook. Bill # A09057 ensures that the content of textbooks is free of any slanted bias toward pro-Islamic traditions, anti-Semitism and anti-Judeo-Christian values and racism. 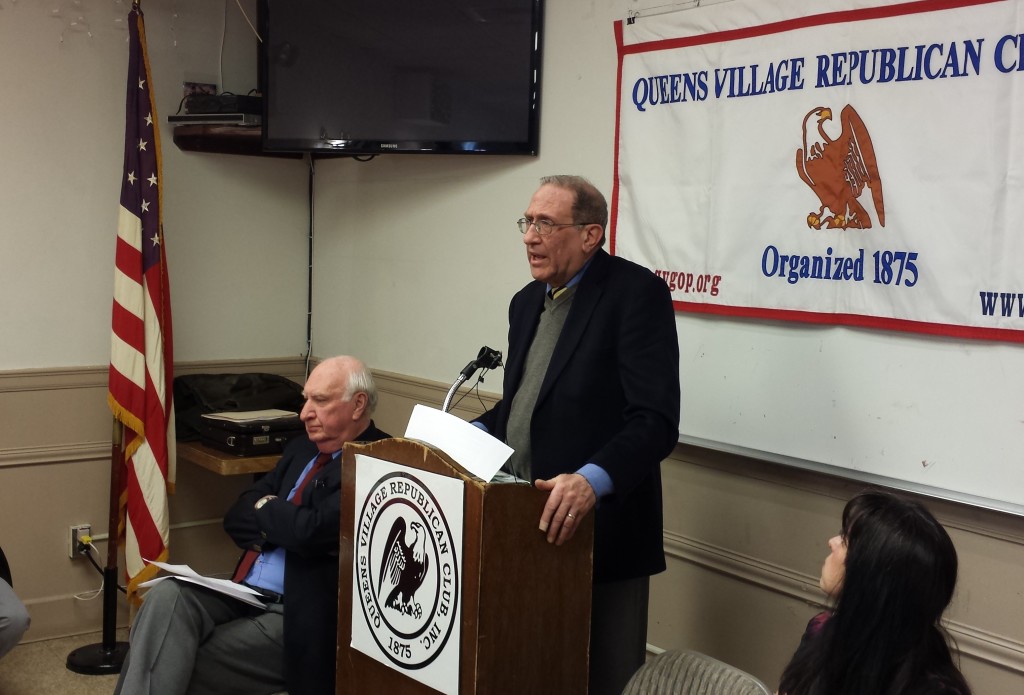 Next, Frank J. Russo, Jr., stated that the issue of School Choice has been subject to the greatest misunderstanding.  Russo spoke about the Blaine Amendment of the 1870s that was an anti-Catholicism bill that prohibits giving aid to any religious school, which is partly responsible for the opposition and misunderstanding.  By far the greatest opposition comes from the teachers union, who want to keep their government school monopoly. Reports are manifold of minority students who switched from public to private schools, whose performance was measurably better at a lower cost per student.  Competition fostered by school vouchers and choice, improves the overall quality of education, even spilling over to the public education system.  In Milwaukee, where the voucher system was first adopted, saw an immediate improvement in the performance of students who switched to private schools. But what was even more remarkable was the corresponding improvement in the public school system years later due to the forces of competition for clients, namely their students. Public education improved in order to keep their students from switching out of the system. This is an issue to help the poor and minorities which Republicans are championing and taking the lead on, and many Democrats, who are in bed with the teachers union, oppose. 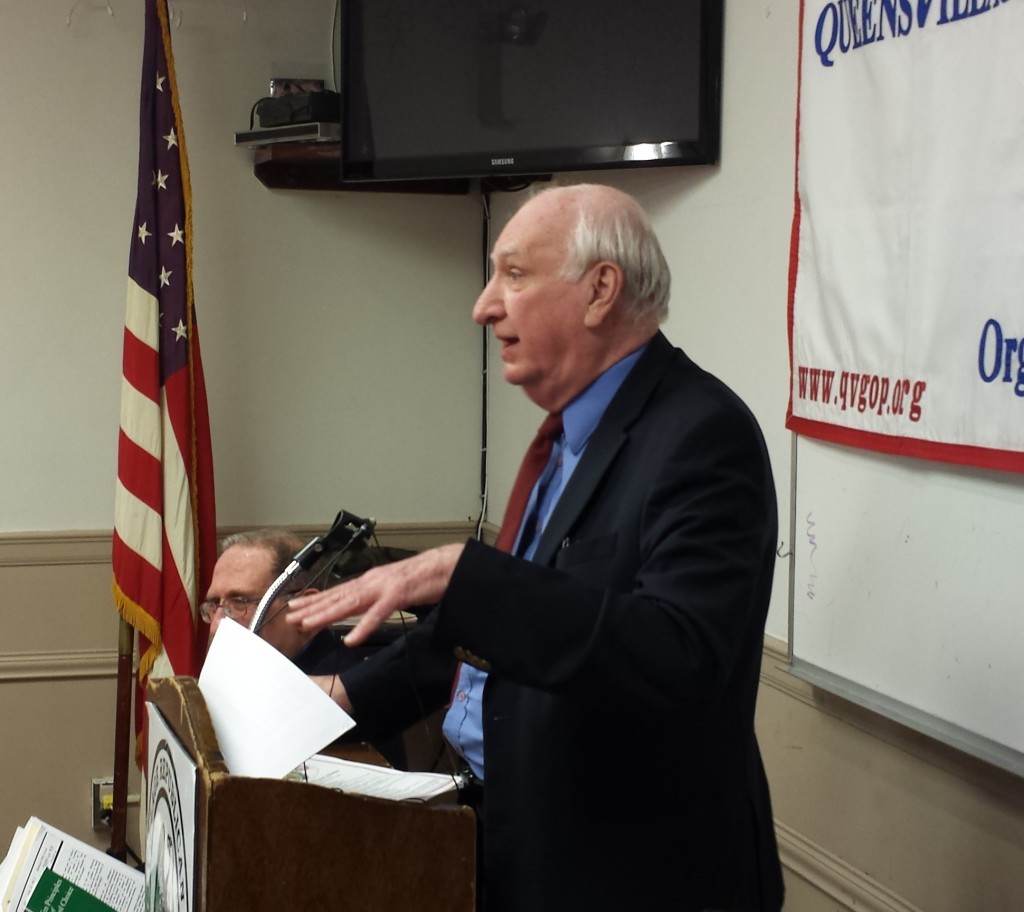 The third panelist, Dennis Duffy served on the Lynbrook Public School Board and received the New York State PTA Distinguished Service Award.  He congratulated our Club for honoring Abraham Lincoln, but said the Democrats throw their leading presidents, Jackson and Jefferson under the bus because of their slave ownership.  He spoke about Milton and Rose Freeman’s book:  Free to Choose, and highly recommended it. This book focuses on school choice and the need for free markets in the field of education.  School choice encourages competition which is good for all.  Government has no business doing the educating.

A lively question and answer session followed which dealt with the textbook bill, the School Choice bill, the Blaine Amendment, and why District 26 in Queens is always on top. The answer is parental involvement. The national plague of violence and lack of discipline in the schools was brought up quoting statistics that hundreds of thousands of teachers are physically attacked and threatened annually. It is imperative that teachers’ authority, discipline and character training are to be restored. Strong Republicans who can advocate for such education policy need to run for office and get elected to public office.