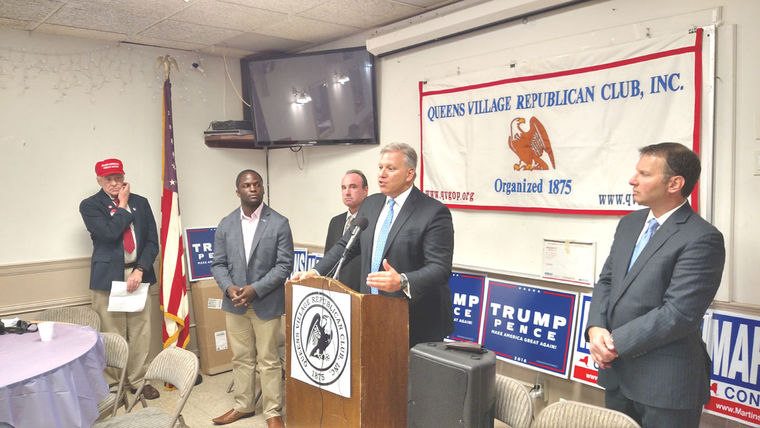 Republican hopefuls for the state Assembly and Senate and a businessman weighing a gubernatorial bid talked about policy issues at a Queens Village Republican Club Meet the Candidates night at the St. Anne’s Council last Thursday.

“Every element of Albany is broken,” Harry Wilson, a former investor who may run for governor in 2018, said. “We are in the top five or 10 in spending in every category and we are in the bottom five in results in every category and that’s why we need to take a restructuring approach to the state.” Wilson, who served on the Obama administration’s Auto Industry Task Force, helping to restructure General Motors when it was failing, and previously ran for state comptroller, talked about making large charges to the state’s business laws.

“What we should be doing is dramatically restructuring the tax and regulatory climate of the state,” he said. “I am convinced we can cut at least $20 billion of spending out of the state budget, but that’s 14 percent. I’ve never found a company I couldn’t cut 10 percent out of.”

Another Republican hopeful for the state’s upper chamber — Jarret Freeman, who is challenging state Sen. Leroy Comrie (D-St. Albans) — also talked to the Republican Club crowd.
“It’s important that we as a community, Republicans and even Democrats, we have to find ways to work cooperatively so we can actually see how we’re going to make our community something that’s sustainable for all of us,” Freeman, a Cambria Heights resident, said. “And so, when I thought about this, I thought about, what does success look like, really when policy is complemented with investments in our infrastructure, investments in our education, investments in our community at large, and that’s what fueled my desire to really run.” Freeman is a representative to the United Nations for the Pathways to Peace nonprofit group and the executive liaison at College and Community Fellowship.

Ira Harris, a business owner who is running against Assemblyman David Weprin (D-Fresh Meadows), talked about what his agenda will be if he is elected. “I’m running for Assembly due to the frustration that I see with government and politics,” said Harris, who lives in Queens Village. “Day after day, it’s the same issues that never seem to get fixed. From the corruption in Albany to the lack of quality education for all and everything in between.”