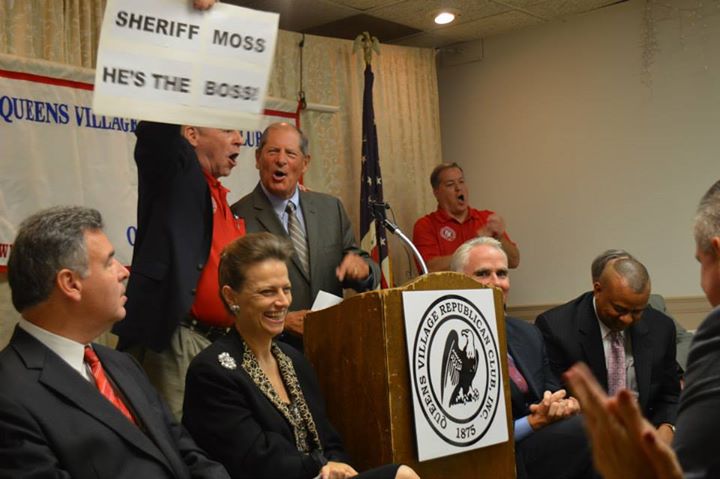 The statewide, congressional and assembly candidates who spoke at the Republican candidates rally Tuesday evening at the St. Anne’s Council Hall of the Glen Oaks Knights of Columbus, said it was the most amazing candidates meeting they ever attended. The meeting was in the format of a candidates rally, with cheering and chants and a T-shirt auction led by retired NYPD Captain, Joe Concannon.  The energetic event succeeded in getting the crowd of over 100 attendees packed into the SRO meeting hall sufficiently fired up go out and spread the message of personal freedom and support the candidates to win back our government for the people of the State of New York in the upcoming General Election in November. 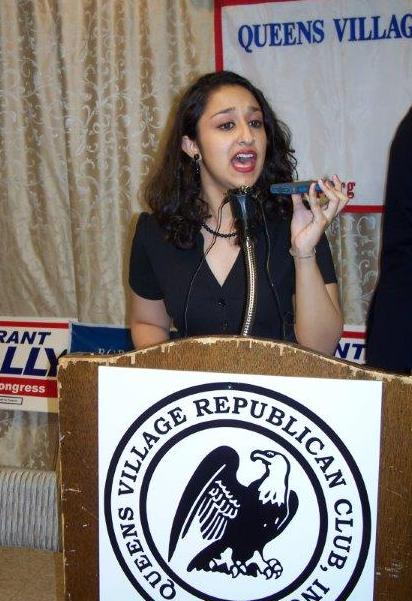 After a stirring rendition of the National Anthem by Nupur Joshi, a Rutgers University Pre-Med student, the first chant “Thank You N-Y-P-D” was a shout-out to the greatest police force in America, to the men and women who put their lives on the line to protect our lives day and night. The Queens Village Republican Club believes law and order and public safety is our number one priority and stands behind our police.

Sheriff Chris Moss, candidate for NYS lieutenant governor was greeting at the podium with chants of “Sheriff Moss, he’s the boss!” He was introduced by former Congressman Bob Turner who recalled the naysayers and disbelievers who said he would never win the special election for Congress in a majority Democrat district in Queens.  Sheriff Moss asked “Are we winning or are we losing?”  He mentioned 400,000 have left New York State because of the high taxes. We have the highest taxes and utility costs and NY ranks worst in America for corruption.  Small business owners are crushed with 1000’s of regulations.  To enthusiastic applause, he promised that Rob Astorino will sign a bill for a moratorium—no more regulations. Enough is enough! 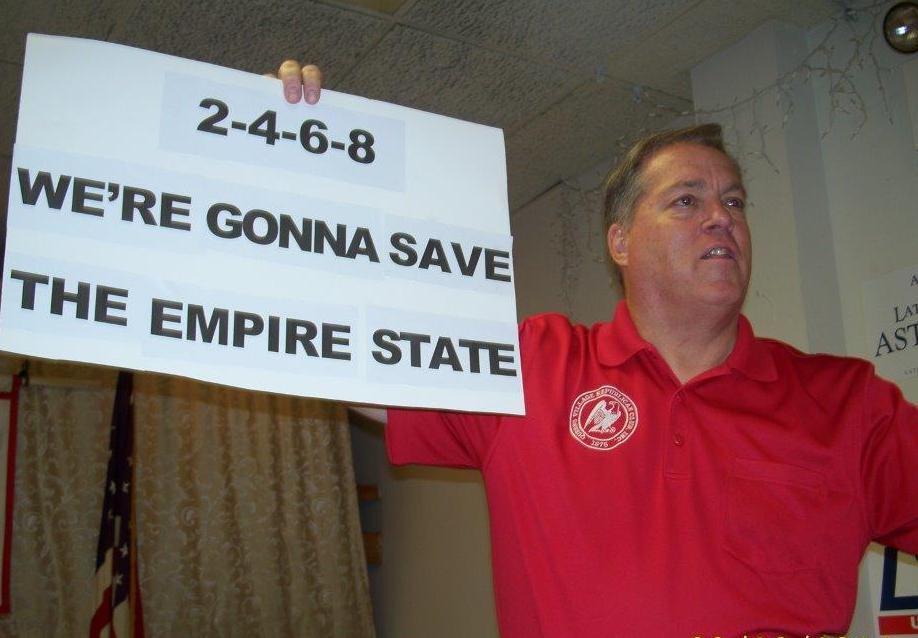 The chanting continued as John Cahill, the Republican candidate for NYS Attorney General took the podium. He was introduced by Robert Beltrani, chairman of the Queens Republican Party since the death of Phil Ragusa.  Cahill said that his opponent, Eric Schneiderman’s silence on corruption in Albany among other things, was what drove Cahill into the race.  Whether it’s the Moreland Commission, or attendance at the funeral of one of our fallen heroes, Schneiderman is silent, uninvolved. There have been 30 arrests of elected officials out of Albany in the last seven years and an ongoing federal probe into the network of corruption that needs to be uncovered. 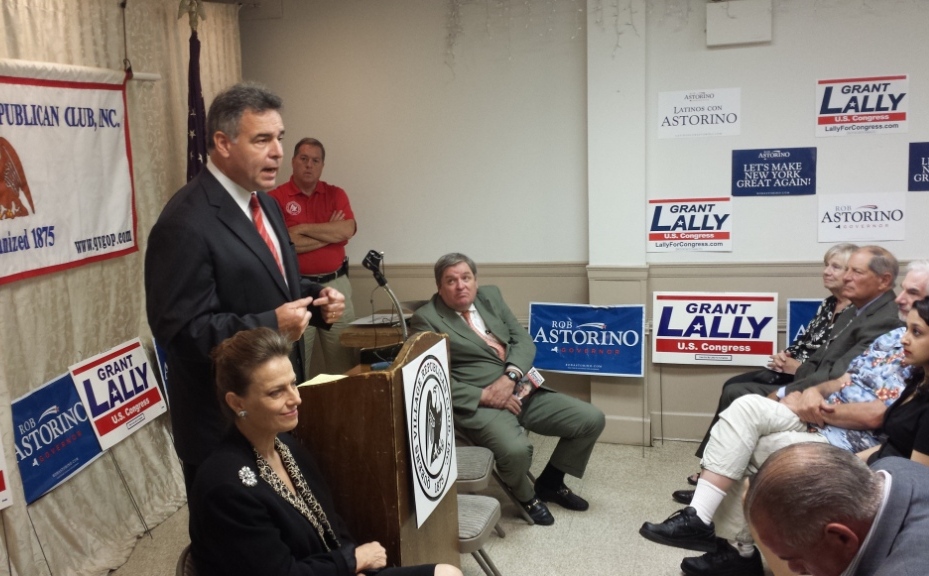 Grant Lally, candidate for Congress in the 3rd Congressional District was introduced by Hemant Shah, member of Queens Village Republican Club board and past president of the Jain Center of America.  Lally’s race will send a strong message to President Obama that we care about principles, individual freedoms, work opportunities, and the ability to raise our families with our own values, including religious freedom.  Lally will soon open his campaign headquarters in Whitestone. 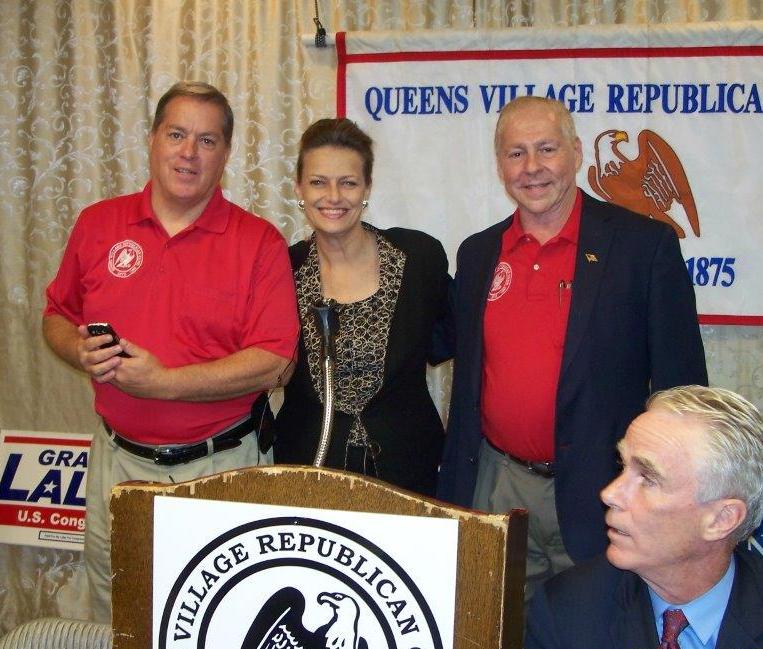 Maureen Koetz, a NYC attorney and the 2014 Republican candidate for NY State Assembly in District 65, lower Manhattan, is running against Assembly Speaker Sheldon Silver.  She was introduced by Rosemary Serra president of the Nassau County Federation of Republican Woman.  Since Silver has refused to resign after repeated calls for his resignation, Koetz decided that the only alternative is to run against him.  Silver, she said, gave tax exemptions to billionaires, five Manhattan developers, who in turn gave campaign contributions to Democrats with most of it going to Andrew Cuomo.  When the Moreland Commission started to investigate these shady deals with the governor, it was abruptly shut down. She plans to go to Albany to file a JCOPE complaint to challenge the legal and ethical bankruptcy of Cuomo, Silver and our state officials.

Bob Antonacci, a CPA and an attorney, is the candidate for NYS Comptroller. He was not present but Don Clarey, his campaign manager spoke for him.  We learned there never has been a comptroller in NY who has a CPA degree.  He is taking part in a statewide experiment for campaign matching funds of small donations.  We can help Antonacci by giving at least $10, which will be matched by $70.  Antonacci needs 2,000 donors to qualify for the matching funds.  When $200,000 is raised, which is likely to be soon, the State of NY will write a check for 1.2 million dollars which will make him competitive with his opponent, the incumbent comptroller Thomas DiNapoli. 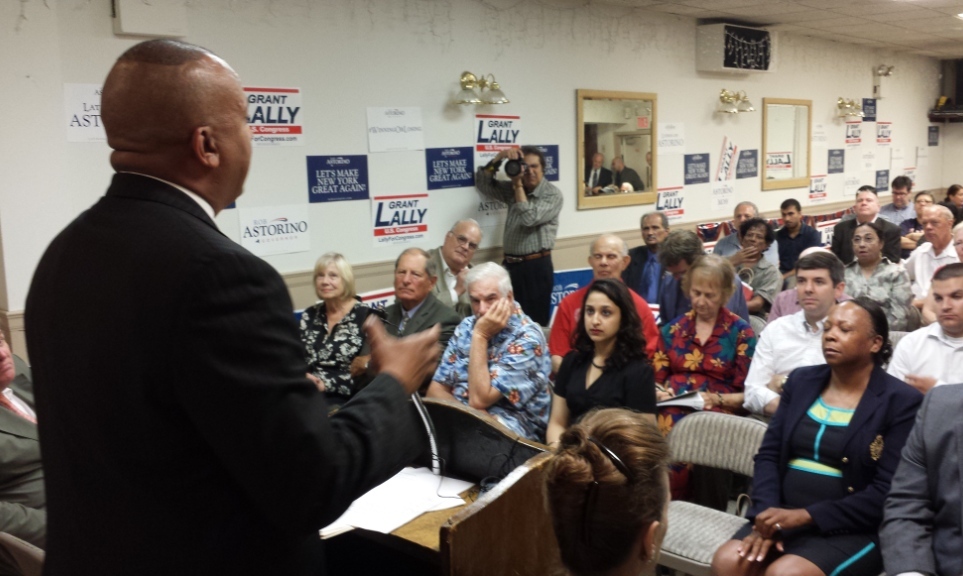 The meeting ended with a call to action, to help the candidates win, to support Bob Antonacci with small donations for the public matching fund, to take home posters and lawn signs, to donate to the Club to support future events, and to write to our local newspapers in light of Governor Cuomo’s refusal to debate Rob Astorino, and ask, “Why not?”