“…there are 7,700 New Yorkers alive and walking the face of this earth today because a New York City Police Officer cared enough for those they don’t even know to uphold the law and civility in our society.” 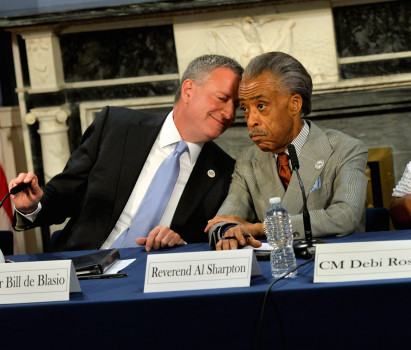 New York City could not have a more polarizing figure sit upon its doorstep than Rev. Al Sharpton coming from a glitzy, gated community in New Jersey. As “stalker in chief,” Sharpton pours his acid upon the busy streets of NYC and elsewhere in what used to be the safest big city in America. Sharpton’s history of tearing communities apart is now legendary across the nation, as residents are left to pick up the pieces, put out the flames and replenish inventories of stolen goods.

Yet here in Queens County in a quiet cutout called home by hard working residents, NYC Councilman Rory Lancman seems to want to align himself with Mayor de Blasio’s Al Sharpton, and continue to debase the historic successes of the NYPD. How Lancman’s constituents benefit from his unwarranted attack on the police is questionable at best. His actions as a city councilman are irresponsible to be sure.

Lancman has no horse in the race of the racially divisive overtones and temper tantrums of race baiter Al Sharpton. But Lancman nevertheless seeks to align himself with the harsh rhetoric of this community trouble maker and professional agitator. The councilman cites a 40-year-old study written up in The Atlantic as evidence to back up his shallow claim that the “broken windows” theory doesn’t work. While Lancman ties the knot with Sharpton, one can only wonder how this is sitting with the taxpayers of Lancman’s district, which includes Fresh Meadows, Briarwood, Hillcrest, Jamaica Hills, Jamaica Estates, and Kew Garden Hills. What about the ongoing related criminal justice costs we all have to shoulder because of Sharpton and company’s antics to disrupt New York City and the nation?

We invite the community to take a look and see how the crime numbers in your community are silently and quietly creeping up. We invite you to see how in “key” communities (some of the poorest areas of the city), where violence has historically been raw and uncontrolled, we now have deadly, dangerous shooting incidents and shooting victims climbing upwards. In some cases a 1500% increase, and overall, citywide incidents of shootings are up 12%. Grand Larceny Auto was once the defining downward force for substantial decreases for years — not so much anymore. Check what’s happening in your part of town.

Signs of the past coming back are all in place with de Blasio and Lancman trashing the police at every opportunity they get. What do we the community get? We get historic increases of police officers being injured in the line of duty; the likes of which we have not seen in almost 20 years. An emboldened criminal element, more violent streets and communities wondering when is it going to hit us next?

How did we become the safest big city in America today? Well, Police Commissioner Bill Bratton could tell you: It’s all about addressing the minor problems in a community. Bratton would say it’s by not letting things get out of hand. The Commissioner would talk about dampening the appetite for committing a crime within the criminal element in our society and how they used to count on the police looking the other way, not addressing those little things. You could hear Bratton’s words echo and ring as he sat at a table this past month with Mayor de Blasio and Rev. Al Sharpton. The only problem was that at that meeting de Blasio was twisting and turning Bratton’s words 180 degrees with a decade of police executives shaking their heads in utter disbelief.

What is the “broken windows” theory and why should you, as a resident of the community, care? Broken windows is a theory that says if you pay attention to small things such as petty crime, it will not grow into a larger problem such as serious violent crime. This includes addressing community plagues like graffiti on stores, walls and our parkways, low level street trading, the selling of pirated movies and software, panhandlers, squeegee men, street narcotics, vagrants, untaxed cigarettes and alcohol, prostitution, broken car windows, stolen auto tires and rims, auto computer systems, repairing cars in the street, double parking, disorderly conduct, street fighting, and a whole lot more. These are the things that eat away at our civil order and stable society — order maintenance in the community.

Lancman would apparently like to see a return of petty crime. We wonder how this would play out in Glen Oaks where stealing tires, rims and more is getting to be a common experience. On 73rd Avenue, 188th Street, Utopia Blvd, Union Turnpike and other areas in not only Lancman’s district but others as well, cars are being “keyed,” tires slashed and windows broken and noise out of control. His constituents should let him know about their “quality of life” and just how important it may be to them, our senior citizens, our residents attending religious services as we go from dusk to dark, as we board trains and buses during all hours of the day and night. New York residents need to remember what life in the city was like when crime was out of control, in order to really appreciate where we need to be both today and in the future.

We can’t yet call this Bill de Blasio’s “2014 Summer of Death.” But as shootings and shooting victims skyrocket out of control, we can cite escalating violence on the streets of NYC, in taxicabs, NYC housing developments, and compare that with the overall success of crime strategies employed in NYC for the past 20 years wherein over 7,700 human lives were saved because of the hard work of the men and women of the NYPD.

No discussion of crime in NYC would be complete without addressing NYC Local Law 71, which was better known last year as the Community Safety Act. This law sought to address alleged constitutional violations by NYPD in the now totally misunderstood stop, question and frisk policy which originates from the NYS Criminal Procedure Law.

The Community Safety Act uniquely puts NYC police officers in the crosshairs of professional agitators such as Al Sharpton. Prior to the implementation of this law, Sharpton and his ilk had to deal with the NYC Law Department to settle what some would call “dialing for dollars” as they brought suit and filed claims against police officers in the City of New York. The Law Department was well known for settling cases and setting up a cash cow for plaintiffs. Now because of Local Law 71, police officers have to represent themselves with privately hired lawyers. Police officers who are fighting to keep their homes, pay the education for their children and put food on the table, now have to weigh how to respond to street criminals and thugs because anyone can now file suit against a police officer as an individual. It should come as no surprise that the number of stop, question and frisks in the entire City of New York have collapsed from hundreds of thousands a year to less than 20,000. Likewise, the numbers of guns taken off the streets have been drastically reduced. The stop, question and frisks were an important component of the city’s nationally acclaimed CompStat program. CompStat is a statistical program which puts the data of crime and subsequent actions of police officers on an electronic pin map. Police executives are held to account for their crime fighting strategies’ effectiveness and overall crime reduction.

CompStat is a National Institute of Justice award-winning program to fight crime in communities near and far. The program works, and its successes can be seen all over the nation as well as right here in NYC where it was developed. The program places performance demands and measurement of activities taken by police personnel. This program “properly managed” can work, but it requires resources and intensive training by all ranks within any policing agency.

If NYC could be found at fault for anything, it would be the lack of training and professional development of its personnel in properly carrying out this aspect of police operations. The NYC Council can be found equally at fault for its failure in oversight. The Council has the duty and the obligation to correct these legal violations. However, by design they sought to limit and handcuff the police rather than improve the professional development which these hard-working men and women need and for the subsequent delivery of services to the visitors, residents and citizens of New York City.

While City Councilman Lancman may take some comfort in bashing the police, the NYPD as a whole or in part, he would do well to educate himself and his constituents to obey the law and encourage others to do the same, to engage with local police commanders and personnel. The police need the community in order to be effective and the community expects that police officers solve crimes, expedite the flow of traffic and bring “order” to our civilized society. Police operations are imperfect and at best sometimes the absolute last thing anyone wants. But it’s all in a day’s work.