Editors note: As a tribute to the late great patriot Philip Haney, who was tragically killed on Feb 21st, we are running the past column by Robert Golomb, who explains how Haney blew the whistle on the policies of the Obama Administration that made America susceptible to terrorist attacks. 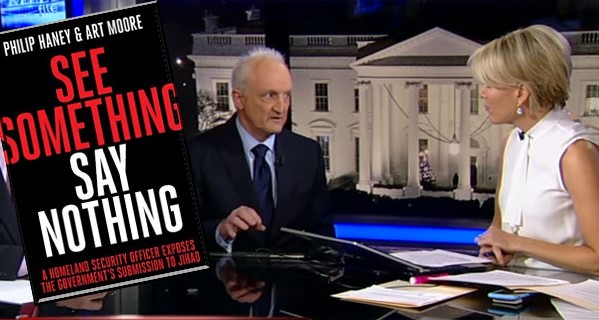 Perhaps there are some among us who have forgotten the 14 Americans who on December 2nd 2015 were slaughtered while attending a job related county department of health training event in San Bernardino California. For those who may have forgotten, Philip Haney, a founding member in 2003 of the United States Department of Homeland Security (DHS) and  later a terrorism analyst at DHS National Targeting Center (NTC) and currently best known to the American public through his numerous appearances on television and radio news programs as a fierce critic of the Obama Administration’s handling of the events leading up to the massacre, has some advice.

That advice Haney, 63, whom I interviewed in West Nassau County, New York, offered me was simple. “ Search the Internet for the slaughter in San Bernardino” he stated, “ and look at the pictures and read just a bit about the lives of the 14 innocent men and women who were killed.  The images of their loving, kind, wonderful faces will come back to your mind…. in my mind, at least, they will remain until the moment I die.”

“ I have to live with the knowledge” he continued, that the people { who were murdered} might very possibly be alive today had the heads of the Obama Administration’s intelligence community not prevented some of their members from doing our jobs.”

This stunning charge did not come as a surprise to me, because like millions of Americans who had watched the Fox News’ Kelly Files on the evening of December 10, 2015, I had heard him make the same allegation:

From November 2011 to June 2012 Haney had been assigned by the   DHS’s NTC to identify foreign- born Muslims with links to terrorist organizations entering America. During that time, he discovered that hundreds of Muslims with affiliations with Tablighi Jamaat, a worldwide  pro- jihadist organization with at least 70 million members, were easily entering and then freely roaming throughout the United States.

In addition, Haney learned that Tablighi Jamaat had connections with the  global Deobandi, an even larger international Islamic movement, whose  leaders  control thousands of mosques throughout America, Africa, Europe and the Middle East. Located in Riverside California, Dar Al Uloom Al Islamiyah of America is one such mosque.  Among one of this mosque’s regular worshippers was Syed Rizman Farook, the monster who along with his wife, Tashfeen Malik, who herself had known associations while living in her native Pakistan with the pro- sharia, pro- jihad group, Al -Huda, massacred innocents in San Bernardino.

Referring to a database he was assembling at the direction of DHS Chief Counsel concerning organizations with alleged links to terrorism, Haney told me “ Shortly after I left NTC, the Civil Rights and Civil Liberties divisions of DHS, along with urging of the State Department deleted a total of 67 records, including detailed information on individuals and organizations affiliated with the Tablighi Jamaat movement.”

Haney noted how DHS rationalized their decision, telling him that since   Tablighi Jamaat had not been officially designated as a terrorist organization, they were concerned that the investigation was unfairly profiling members of the group, possibly in violation of their civil rights. ‘I found it inconceivable”, Haney lamented, “ that given the information we had provided, and in addition, the 1200 law enforcement actions we had already taken, that such a group was exempt from any further investigation.

Recalling, however, that he still possessed hope that the DHS would reverse its decision, he later found out the opposite was the case:“ Rather than use the intelligence we provided to launch a further probe into Tablighi Jamaat, the DHS and the DOS effectively terminated the entire investigation.”

He then explained to me as he had done with Megan Kelly six months earlier, how the massacre in San Bernardino might have been averted had the DHS acted differently. According to Haney, Syed Rizwan Farook would  have probably been on a ‘no-fly’  list because of his association with the Dar Al Uloom Islamiyah Mosque and thus his wife, and then fiancée, Tashfeen Malik, would have been denied the K1 marriage visa granted to fiancées of legal immigrants to enter the United States due to her association with Syed. “ This would have negated the facts on the ground that led to the massacre”, Haney stated.

The former counter- terrorism official then speculated that the same could be inferred about the victims of the Boston Marathon Bombing on April 15th, 2013, almost three years before the tragedy in San- Bernardino   On that awful day in Boston, as they stood a short distance from the race’s finish line, three spectators were killed and 260 people were injured – including six who lost legs, the youngest amputee a seven year old girl.  The two barbarians who perpetrated this act against humanity were named Tamerian Tsarnaev and the other, his younger brother, Dzhokhar.

As Haney explained them to me, the events in Boston sounded eerily similar to those which were to transpire in San- Bernardino 3 and a half years later:  “ When I was in DHS as early as 2009 and for the next 4 years, we were collecting data on the Islamic Society of Boston Mosque {the mosque which the Tsarnaev brothers attended].”

Again with a glaring similarity to San Bernardino, Haney then informed me  that he had provided evidence that the mosque had strong ties to terrorist organizations, including Al-Qaeda, Hamas and the Muslim Brotherhood. Despite this evidence, Haney asserted that the Obama Administration failed to infiltrate the mosque- an inaction, he believes, which proved tragic: “ Had law enforcement been allowed to properly investigate the mosque, they well may have been able to uncover the brother’s plot.”

The rest of his sobering story speaks of a federal government that appears to hold an inverted conception of good and evil. While Haney in the past had received numerous written commendations from his DHS superiors for his work in identifying Islamic terrorist groups posing imminent threats to America, shortly after the Boston Marathon attack, he found himself the subject of a DHS investigation, charging him with leaking information about it.

Haney told me that he did not break any law, but rather was the victim of the Obama Administration’s efforts to retaliate against him simply for telling the truth:“ This was a classic case of reprisal against a whistle blower. I provided accurate, compelling evidence that totally contradicted their narrative …{ which]  is that Islam is a benign and loving religion, and therefore possesses no credible threat to the United States.”

Although the charges against him were eventually dropped, and he retired honorably in July of 2015, Haney conceded that he did not feel fully vindicated until he was given the opportunity to testify at Judiciary Committee oversight hearing chaired by Senator Cruz in Washington DC this past June 28th.

During hearing, Haney offered names and descriptions of global Islamic organizations presently operating in the United States. During his testimony Haney maintained that the Obama Administration had ordered the Department of Homeland Security to ‘modify’ over 820 records related to these networks. Included in some of those records, Haney noted, were intelligence information that, he believes, if correctly applied, might have prevented the June 12th 2016 Orlando Nightclub terrorist massacre, which claimed 49 innocent American lives.

If he needed any further vindication, it came, he felt, two days later during Senator Cruz’ same Senate hearing.  Confronted by Cruz with Haney’s   allegation that the government had mishandled more than 800 documents  the Obama Administration’s chief witness at the hearing, Homeland Security Chief Jeh Johnson, responded that he was unaware of the allegation; as for the man making those charges, Johnson testified that he would not be able “ to identify Mr. Hanen (sic) if he walked in the room.”

It was a remark that Haney believes proved his own case for him:“ Remember what I told Megyn Kelly on national television just six months prior. How is it possible that Johnson, as the Homeland Security Chief, would have no knowledge concerning the serious statements I had made?

{ So] when he claimed to Senator Cruz that he doesn’t even know who I am, the American public had to realize that Secretary Johnson and the {Obama] administration are not telling the whole truth about the threat that radical Islam presents to America and the entire world.”

As the interview came to an end Haney gave me a signed copy of the book, See Something, Say Nothing, which he co-authored with journalist Art Moore.  Haney, who resides in Georgia with his wife, daughter and grand- daughter, had come to the New York area in the beginning phase of a five month book selling and lecture tour that is currently taking him through eight mid-western states.

Haney, however, cautioned that because the book documents- even beyond what he had proffered during the interview- how the policies of the Obama Administration had made America susceptible to past terrorist attacks and how the current repetition of those same failed policies continues to make America vulnerable today, I might find it unsettling.

Haney was right. I did find the book, which took me just two days to complete, unsettling, and, yes, even frightening.

Which is why I urge you to read it.

Robert Golomb is a nationally and internationally published columnist.  Email him at MrBob347 and follow him on Twitter@RobertGolomb

« PreviousReligious Freedom!
Next »Celebrate the Everlasting Friendship Between India and America!