Why we need to win the race for Congress in the 3rd C.D. 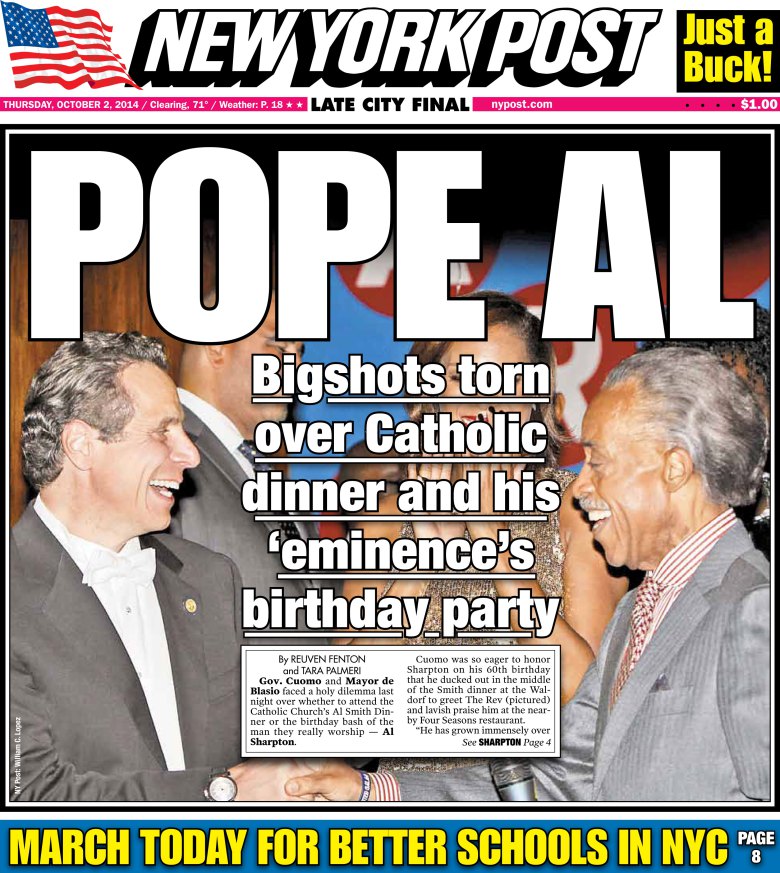 The revolting New York Post cover from Thursday Oct. 2nd shows Governor Andrew Cuomo kissing the ring at the altar of Al Sharpton. Cuomo, Mayor de Blasio, and other Democrat political big shots left in the middle of the Catholic Church’s annual Al Smith Dinner to see the man they really worship, Rev. Al Sharpton who was celebrating his 60th birthday the same night. It is sickening but it’s true. Falling all over each other to sing Sharpton’s praises, Cuomo declared: “He’s no longer just New York’s Al Sharpton, he’s the nation’s Rev. Sharpton – and the nation is better for it.”

How did this outrageous turn of events happen that a thug, a rabble-rouser and race-hustler who led marchers in Crown Heights chanting “kill the Jews,” could receive such acclaim from the highest elected officials in New York? It happened as a result of the low turnout of Republican and Conservative voters in the mayoral election of 2013. Only 24% of Republicans came out to vote. Al Sharpton did not endorse the black mayoral candidate, Bill Thompson and instead got behind the radical progressive Bill de Blasio, who had the best anti-law enforcement credentials campaigning on a promise to “end the era of stop-and-frisk policing.” So Sharpton mobilized his base while Republicans were sleeping and now as payback, de Blasio put Sharpton up on a pedestal, and now we have Mayor, or “Pope Al Sharpton” as the Post puts it. If 20% more Republicans came out to vote we wouldn’t have Mayor de Blasio today.

This is our job now to get 20% more Republicans and Conservatives out to vote on November 4th 2014. The message is that the race for Congress in the 3rd C.D. is a close race. For the sake of our city, state and nation, we can’t afford to allow our base to sleep anymore. Every Republicans and Conservatives vote counts. Knock on doors, make phone calls, talk to your neighbors, or give out palm cards at shopping centers. We need your vote for Grant Lally to win this election on Nov. 4th!

« PreviousDefeat Voter Apathy on Nov 4, 2014
Next »GOP: Let’s get beyond partisan divide