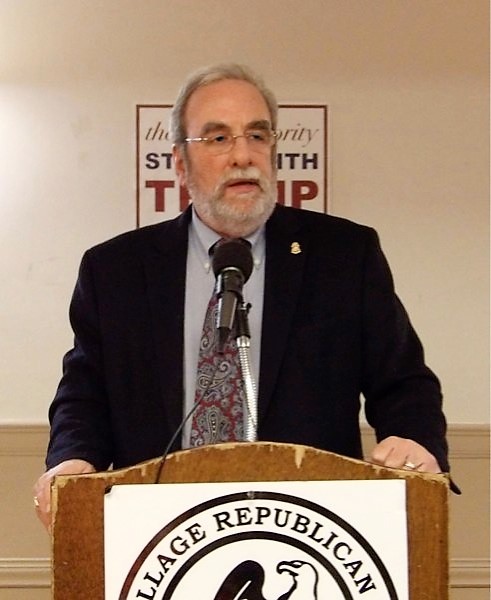 A special guest at the Queens Village Republican Club meeting last week discussed the dangers lurking in sanctuary cities from the perspective of a former Immigration and Naturalization Services agent of 30 years. Mike Cutler, having retired, now uses his experience to write and talk about issues of immigration and terrorism on networks such as Fox News.

Cutler asserted that the majority of issues affecting immigration law enforcement stem from the fact that most regulations are centered on maintaining the Mexican border since the majority of undocumented immigrants come through that port of entry. He also said sanctuary cities, which have offered safe haven to immigrants, invited acts of terrorism.

“Go after sanctuary cities, go after the mayors, go after the governors. Go after anybody who stands for that kind of lawlessness that encourages and induces fugitives, criminals and terrorists to set up shop in those towns. It’s dangerous for public safety and national security,” Cutler said, recommending peaceful discourse and debate as a solution for those opposed to sanctuary city policies. “Sympathy and empathy is wonderful, but let’s not misplace it. Let’s make certain that we do it the right way and that we understand really why we have immigration laws.”

Money is another reason Cutler believes immigration laws need to be upheld in sanctuary cities. Referring to the crime centers along Roosevelt Avenue, deemed the “new ‘old Times Square” by state Sen. Jose Peralta (D-East Elmhurst) in September in a call to clean up the corridor, Cutler said that while enforcement is costly, the currency flow to other countries starts with criminal enterprise taking place in the immigrant communities of sanctuary cities.

The solution to the issue, according to Cutler, is more agents and judges to monitor criminal behavior and ensure immigrants are obeying laws. Interior enforcement is lacking in terms of upholding immigration laws with borders and ports of entry being the first and often last line defense, Cutler said.

There are 514,000 foreign students studying in Science, Technology, Engineering and Mathematics, which, according to Cutler, presents a danger to safety with immigrants gaining the knowledge to possibly build a weapon to be used against the United States. The men who perpetrated the 9/11 attacks were used as an example of how this occurs. Another reason he says foreign students learning in the United States is negative, is the likelihood they will simply take their skills home.

Elected officials in the city have voiced support for the DREAM Act, which will allow undocumented students to qualify for financial aid and eventually assist them in attaining permanent residency, pending background checks.

The DREAM Act has achieved bipartisan support in Queens with both state Senator Toby Stavisky (D-Flushing) and her Republican opponent in the recent election, Carlos Giron, calling for the bill to pass, among other examples.

A champion for President-elect Donald Trump, Cutler argued that the billionaire-turned-politician is unpopular because he is a “patriot” in a globalists’ world. The speaker saw no flaw in showing preference to citizens in one’s own country and showing immigrants the door if need be.

« PreviousWelcome Home Republicans
Next »Video: Michael Cutler’s speech on the Immigration Crisis under the Trump Administration