Mayor de Blasio’s totalitarian statue commission, also known in official parlance as the Mayoral Advisory Commission on City Art, Monuments, and Markers, held a public hearing today at Queens Borough Hall, addressing the city’s statues and monuments which he called “symbols of hate” including the iconic Christopher Columbus statue at Columbus Circle. A few Queens Village Republican Club members and friends were there to testify and some of their testimonies made the pages of the New York Times and other media outlets.

“This is a country built on freedom and democracy, not bureaucrats telling us what is correct and what is not correct,” said Gerald Mattacotta, a 72-year-old teacher at Queensboro Community College.

Philip Orenstein, the president of the Queens Village Republican Club, questioned whether tearing down statues would start a domino effect of removing names from history books and curriculum. “To tear down our statues is just plain wrong,” he said.

Christopher Columbus Monument Slammed by Some at NYC Hearing 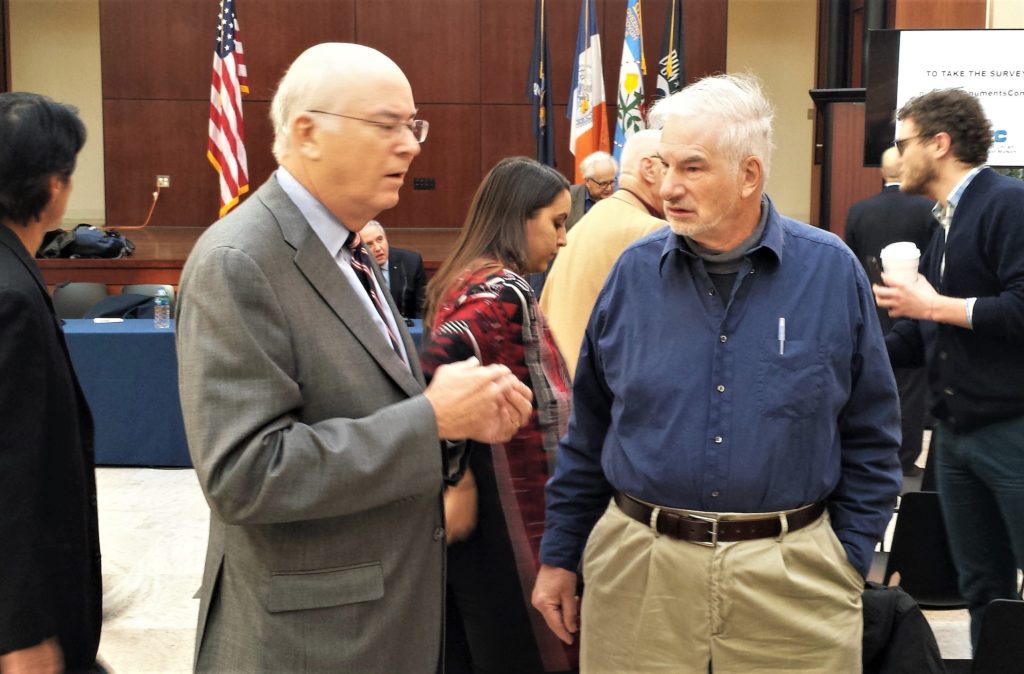 NEW YORK – The commission appointed by New York’s mayor to evaluate statutes and monuments and ensure there are no “symbols of hate” on public property held its first hearing Friday, featuring a mix of citizens who thought some monuments should be taken down and others who lambasted the committee’s work as an exercise in political correctness.

“This is a country built on freedom and democracy, not bureaucrats telling us what is correct and what is not correct,” said Gerald Mattacotta, a 72-year-old teacher at Queensboro Community College.

Mayor Bill de Blasio, a Democrat, announced the creation of the commission in August, days after hundreds of white nationalists protesting the planned removal of a statue of Robert E. Lee in Charlottesville, Virginia, brawled with counter-protesters, leaving one woman dead.

The mayor initially said the commission would perform a 90-day review of monuments, with an eye toward possibly identifying some that should be removed. In a tweet, de Blasio himself suggested one that should go: a plaque on Broadway for Philippe Petain, a World War I hero later convicted of treason for heading the collaborationist Vichy government in Nazi-occupied France during World War II.

Since then, the mayor has softened his tone, saying committee’s main purpose was to develop guidelines on addressing monuments that might be seen as “oppressive and inconsistent with the values of New York City.”

About 20 people spoke Friday at Queens Borough Hall during the first of five planned public hearings the committee is conducting before making its recommendations.

A few singled out the statue of Christopher Columbus that stands atop a high column in Columbus Circle, at the southwest corner of Central Park.

Columbus is revered by some as an explorer and reviled by others for having spread European colonialism and slavery to the New World.

“The Columbus statues glorifies a figure who is against all the things the Statue of Liberty represents,” said Rick Chavolla, board chairman of the American Indian Community House, a nonprofit serving Native Americans. “Symbols like this cannot remain and need to be taken down.”

Glenn Cantave, 24, the founder of Movers and Shakers, a group that advocates for marginalized communities, called Columbus “a terrorist, and that’s why his statue should not stand.”

Robert Holden, a Queens civic leader who will become a city council member in January after winning election this month, urged a cautious approach.

“This country made mistakes obviously. Our history is full of them,” said Holden, a registered Democrat who ran as a Republican after losing a primary. “But we shouldn’t judge our art or monuments on today only. The history is very, very important.”

Philip Orenstein, the president of the Queens Village Republican Club, questioned whether tearing down statues would start a domino effect of removing names from history books and curriculum.

“To tear down our statues is just plain wrong,” he said.

The panel’s co-chairman, city Commissioner of Cultural Affairs Tom Finkelpearl, said the group plans to make recommendations to the mayor by the end of the year.